Howlite is not a rare mineral. However, display-quality crystals of howlite are rare. To date, there is only one known locality, on the shoreline of Bras D’Or Lake, near Iona, Victoria Co., Cape Breton Island.
On the map below, you can see Iona is at the upper right, while the Bay of Fundy localities are about 400 km to the southwest. (To read more about Mineral Collecting along the Bay of Fundy, click here.) 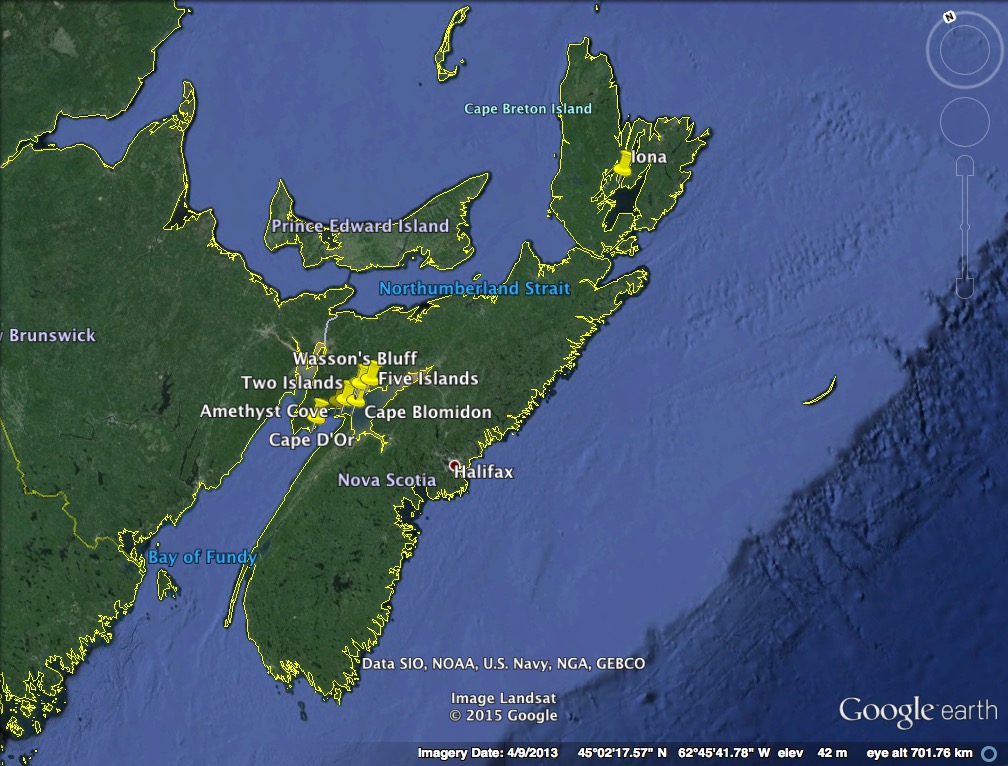 This relatively remote occurrence is fascinating – the howlite crystals occur enclosed in solid, tough bedded anhydrite, exposed in a limited section of cliffs by the ocean. (Anhydrite may not sound “tough”, but collecting there is like collecting the fresh, sharp rock beds at Herkimer!)  These howlite crystals then become exposed as prolonged contact with the seawater turns the anhydrite into gypsum, which flakes away with the wave action against the rock. To date, no other method of exposing them (without damaging them) has been devised. The challenge for us as collectors is obvious: the howlite crystals are very delicate and the waves are not gentle! Very few high-quality howlite crystal clusters survive the process, and far fewer are successfully preserved and collected.
I have been to this locality more than once, I have come back from a trip without a single fine specimen, and I’m not the only one! It’s a long way to go to come up empty-handed, but  the possibility of a good day keeps collectors trying.
If you have never been to this spot or read about it, I thought you might like to have a glimpse to give a better sense of what is involved in collecting and preserving these howlite crystals – this is what it looks like for the collectors who brave the elements and make the pilgrimage, knowing that there may be nothing at all to be found on any given trip.
Access is a hike along a rail line, and the cliffs are down below – to the right in the following photo. 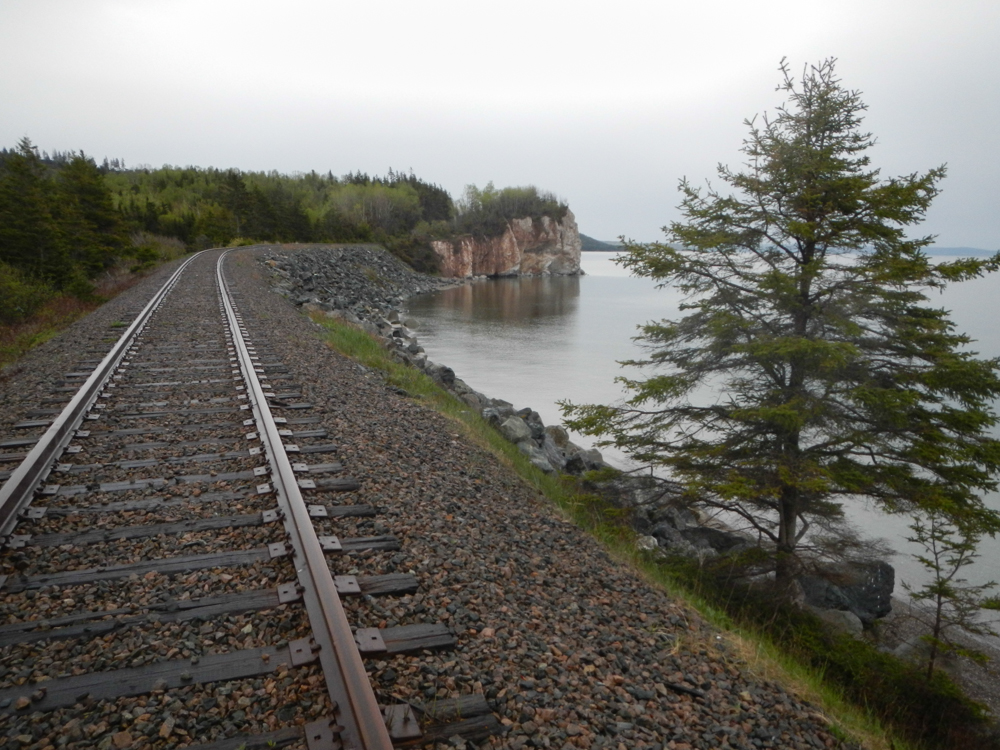 Just like the Bay of Fundy localities – you guessed it – you have to find your way down to the base of the cliffs. There are no ropes here. There are a couple of ways to go, and both involve a steep slope with a bit of scrambling (one slope is nasty, dangerously loose, and the one in the foreground below is not as bad as the other one). Even from up top you can clearly see where the waves pound at the base of the cliffs and hollow them out from underneath. 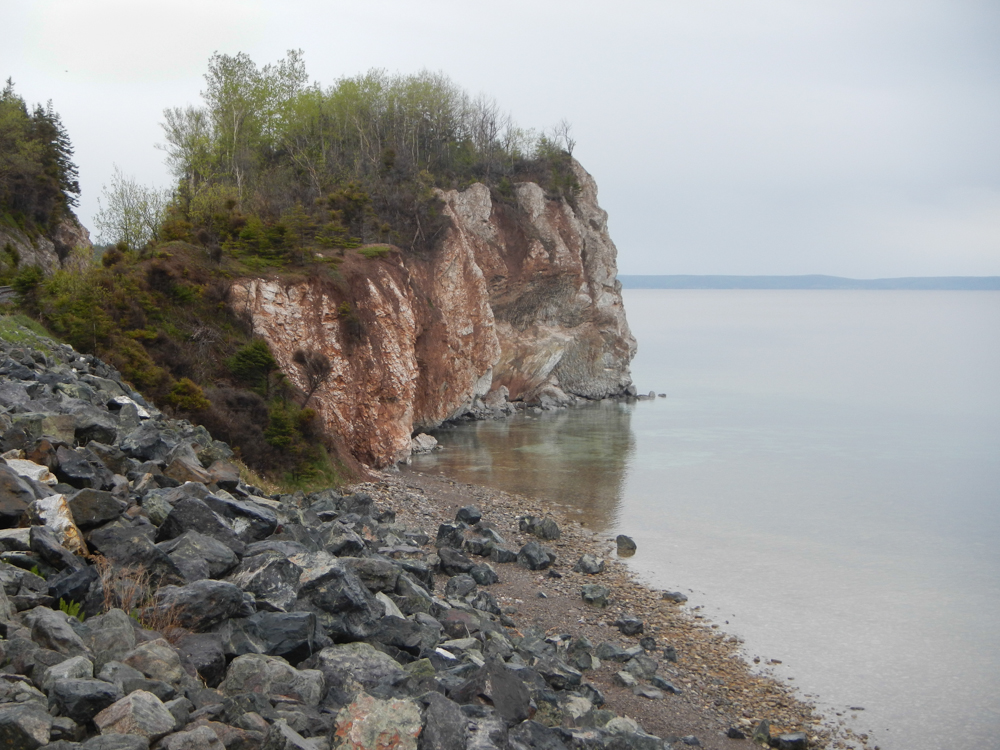 One of the first things you’ll notice at the base of the cliffs is that there aren’t a lot of places to walk on land. Actually, there are almost none. This is a locality where you get cold and wet! 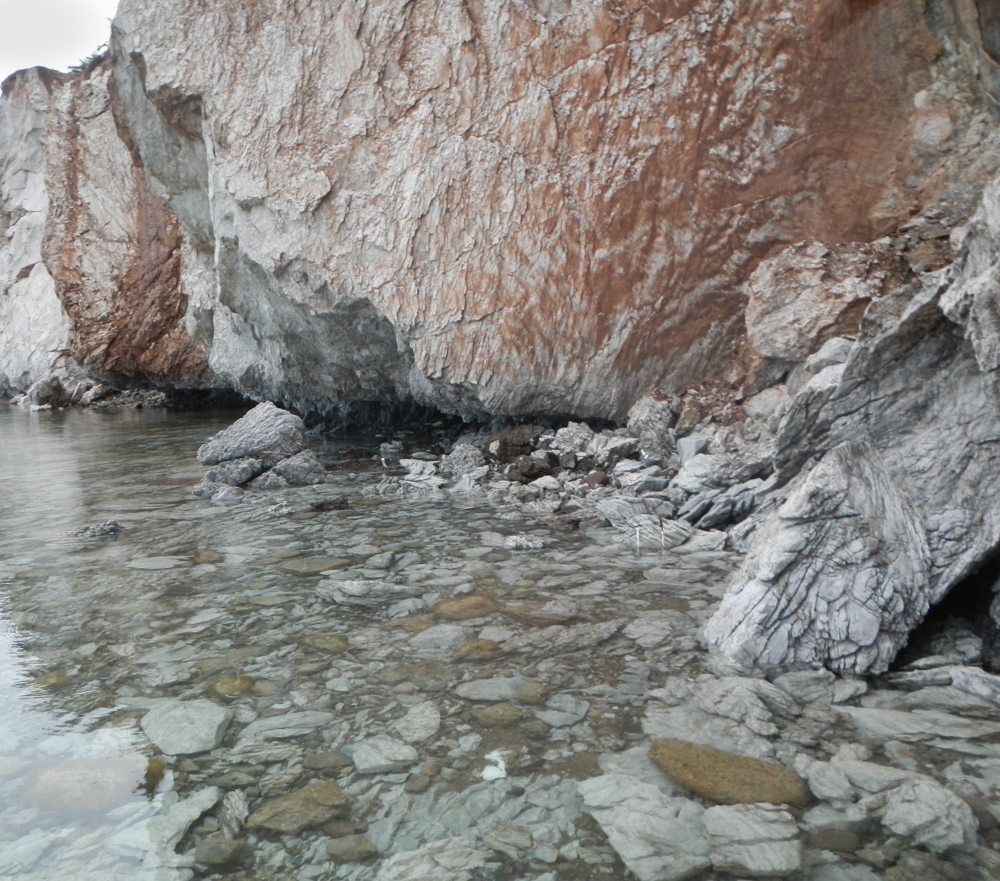 The undercut at the base of the cliffs, anhydrite eroding into the seawater

You’ll see how calm conditions are in each of these photographs. This is the only time when collecting is safe or practicable.
This locality can be very harsh. It is on the shoreline of an extremely temperamental body of water. Within literally thirty minutes, it can change from still and calm, to stormy with waves a few feet high. I’ve been caught by this phenomenon – on one trip, the waves took most of my howlites, a few of my collecting tools and the hat right off my head. None of these items were recoverable – I was busy scrambling back up the slope (the nasty route) because it was the closest way to get away from the waves. Fortunately, none of the lost howlites were that great.
I know, in these photos it looks so peaceful… (and some days it really is!) 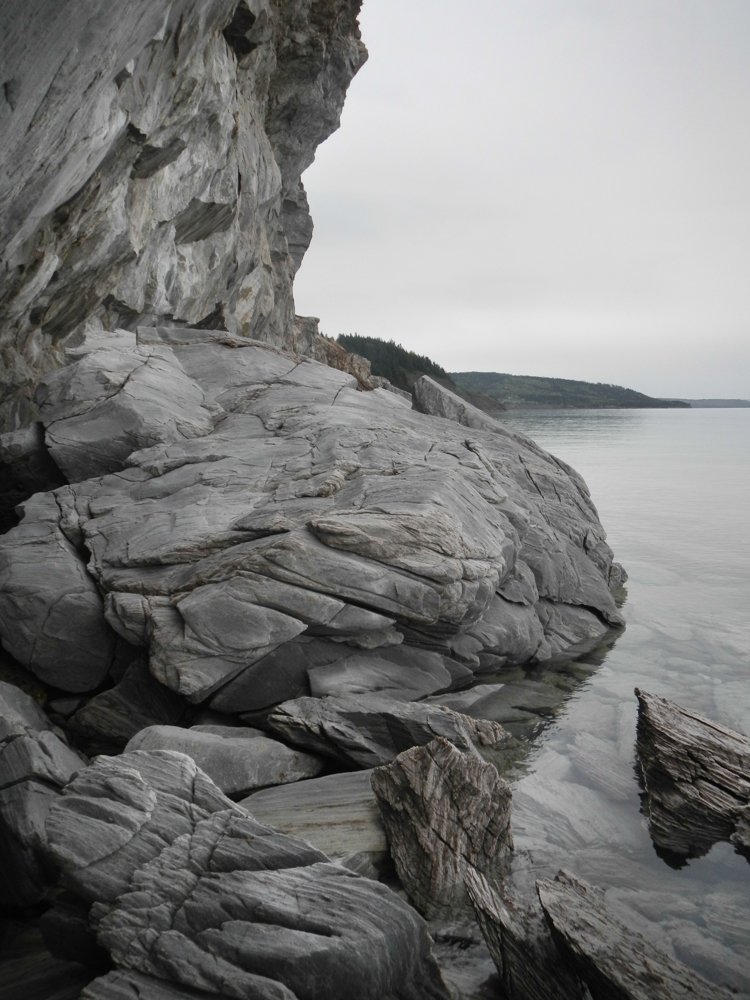 Anhydrite along the base of the cliffs

Occasionally in certain zones along the base of the cliff, howlite crystals can be found. Often one needs to focus close to where the most recent erosion has occurred, because it doesn’t take long for exposed howlites to become ruined by waves or totally frosted by contact with the seawater. 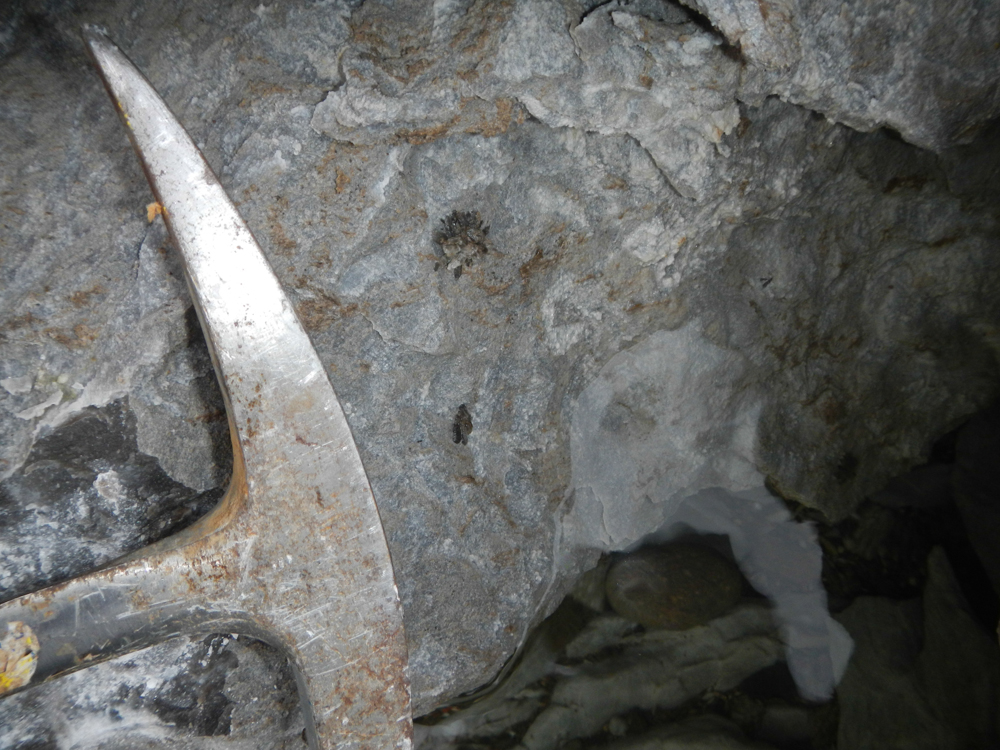 Here is a small howlite cluster in the wall underneath the overhang, just at the water line.
Chance of recovery from the solid anhydrite clliff wall: zero.

Not a tragedy in this case, because if we look more closely: 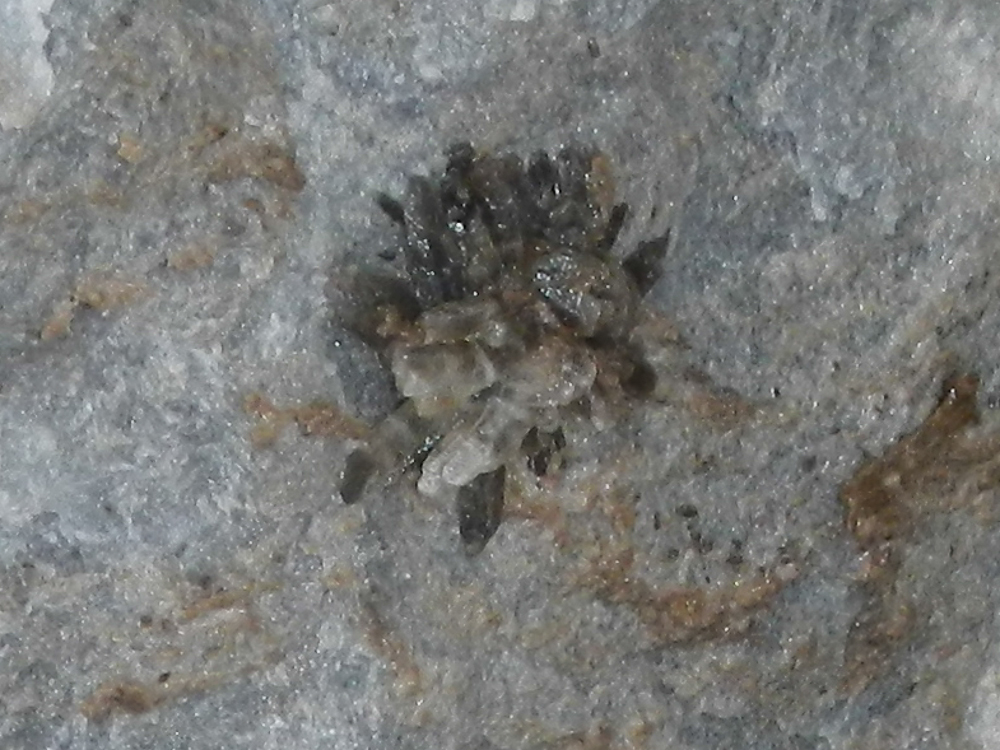 This crystal cluster is badly damaged, as is most often the case when one finally finds one!
(Sorry it’s not a better photo – no studio lights or reflectors available
under the overhang of a shoreline cliff in seawater…)

For cluster of howlite crystals, life at the locality is precarious. The waves themselves are obviously instrumental, exposing the crystals in the first place.  However, during storms, the waves can move rock around… not good. The seawater itself is also key, and yet prolonged exposure can leave the howlite crystals with a frosty appearance – not so sharp. And since this is Canada, there is also the ice to think about… in winter and early spring, the ice is a problem particularly when blocks of ice are floating freely and grind up against the cliffs and rock exposures.

So that’s a snapshot of the howlite collecting experience. It takes work, but also good luck and exceptional timing. Collecting anything as good as the ones on the website is not a common occurrence – I have not, personally.  The howlites on the website were collected over a period of years by Nova Scotia collectors, procured as the result of many visits.

IMPORTANT NOTE:
Please Use Caution!
This loaclity may look gentle and mild in some of the photographs here, but absolutely don’t underestimate it – please be careful if you ever visit. Any arrangements in this area must be made with careful consideration of the weather conditions – mistakes in this regard can literally be fatal. As my one little tale above confirms, weather conditions at  Bras D’Or Lake can change incredibly rapidly. One must always have an eye on managing a safe exit!
No visit to this locality should ever be made alone. The access areas are steep and dangerous. The slopes are loose and there are loose rocks overhead.
This post does not constitute advice or recommendation to travel to the locality and any decision to do so is each person’s own risk and responsibility. Adherence to applicable law and respect of private property are fundamental, and each of us is individually responsible – for ourselves, families and friends, and to the mineral collecting community as a whole – to be compliant and respectful at all times. If you are crossing or conducting any activity on private property, appropriate permissions must be obtained.