Rochester 2020! Whoo hoo! The arrival of spring and our annual fun times in Rochester!

Wait a minute. What?! But it was cancelled.

True, we had no choice and had to cancel the Rochester Mineralogical Symposium in Rochester April 23-26, 2020… It turns out that the spirit of Rochester is not so easily defeated. We made a late-breaking decision to host a shortened version of the 47th RMS online, on April 23: the eRMS 2020.

As always with these reports, I like to lead with a happy glimpse of spring in these northern parts at the time of the symposium. 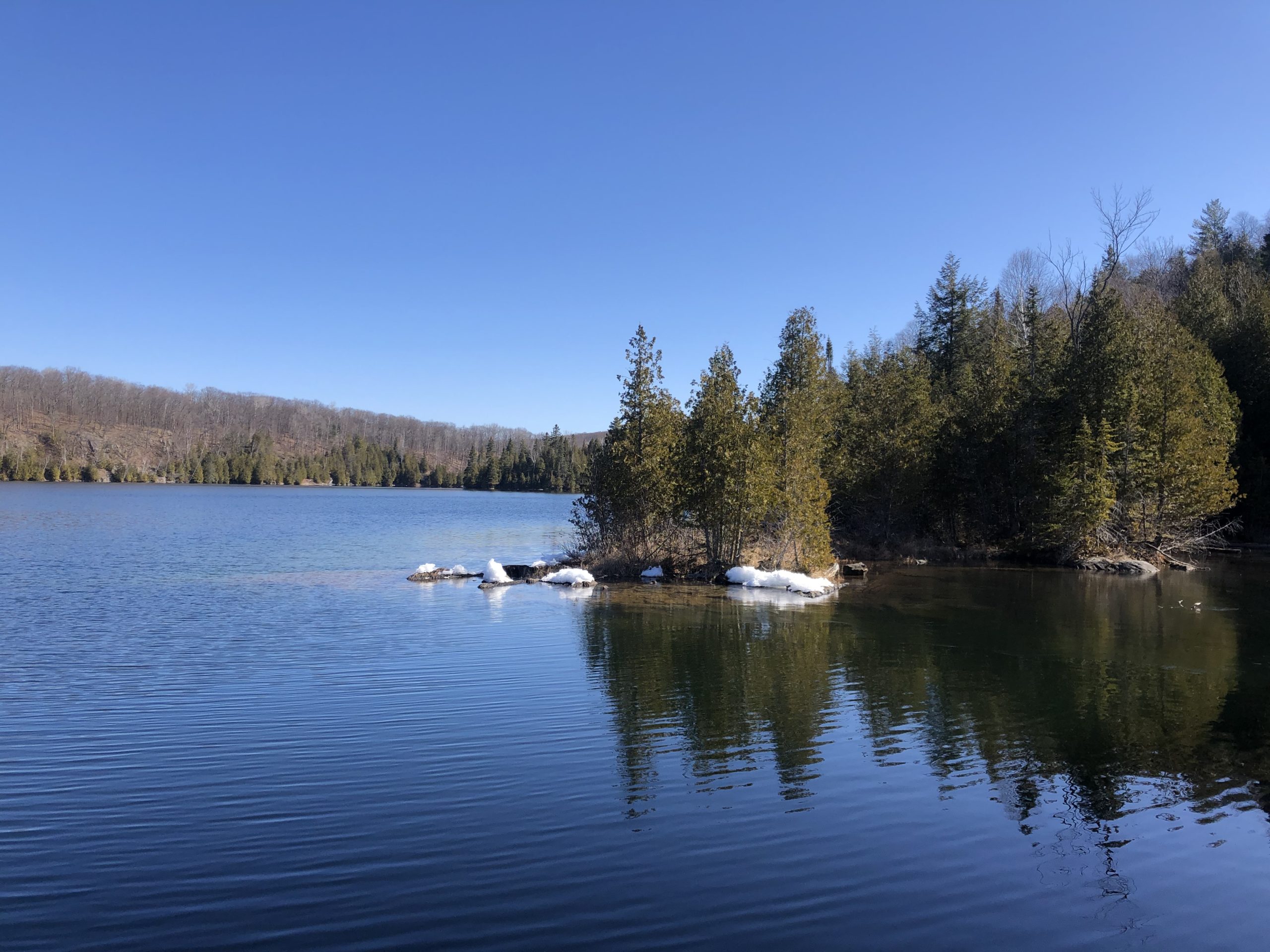 Last melting ice on our lake, the morning of the symposium,
from my broadcasting location near Bancroft, Ontario

I know that for Rochester I normally write a full write-up about interesting topics with lots of great photos from the speakers and all, but we don’t need to do that this year, because the presentations are going to be online and you can watch them! (see the link at the end of this post).

Before I go on about the recent eRMS, if you have not yet been a part of the Rochester Mineralogical Symposium and would like to read anything more about this super annual event, I’m including links to my past RMS reports at the end of this post.

It’s a bit of a story as to how we progressed from the then-looming pandemic to the eRMS, and you’ll be able to read a little more about it in an upcoming issue of Rocks and Minerals magazine.

This is the short and sweet version! In need of a technological solution, John Rakovan, Professor of Mineralogy/Geochemistry and Graduate Director at Miami University in Ohio, and member of our Symposium Committee, arranged to host the eRMS using the online meeting platform he’s been using to deliver pandemic-era university lectures since late March.

We decided we would put together a short program – one afternoon. As many of you know, the full RMS includes hours of amazing presentations from featured speakers from the Thursday night through the end of the Sunday morning – too long a program for the eRMS. (I’m happy to be able to say that almost all of our planned 2020 featured speakers are already confirmed to present at our next RMS, so our great 2020 lineup will present in future.) Instead, we wanted to focus on two time-sensitive aspects of the symposium – two components at the core of each RMS: (1) What’s New in Minerals; and (2) new mineral research (normally presented in our Friday afternoon sessions). Of course we also wanted the connection, laughter and friendship we all usually share when we get together each year in Rochester.

Mystery Subject! – John Jaszczak (the announcement of the new mineral richardsite, after Dr. R. Peter Richards, who did not know we would announce)

For the technology skeptics among you (I know you’re reading), you may be amused that we had some bumpy moments at the start. We can all laugh about this one now, but in the moment it didn’t seem funny. As we began our first presentation, we had no sound. An attempt to address the problem led us into a computer monitor abyss… 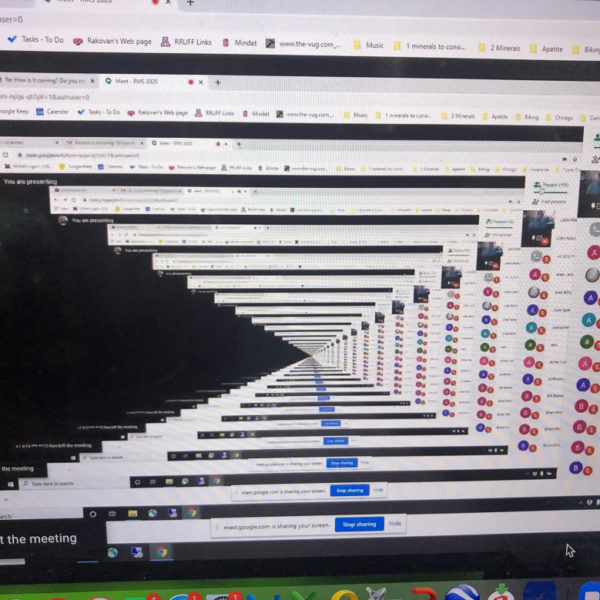 I swear: we had nothing like this come up during the practice run on the Thursday night!

John Rakovan calmly found a work-around, from which point we were in business.

The presentations were excellent and I sure hope you’ll check them out! (Link below)

You might wonder how we were able to achieve the rest – the fun together with mineral friends that Rochester is all about. It actually began with the abyss… people started to chime in on the chat. (If you’ve not used one of these online platforms before, a participant sees more than just the slides being presented, including the chat window at one side of the screen that allows any participant to make a comment all will see.) As soon as we descended into the screen-abyss, the chat began to light up. “Ooooh that’s trippy!”

From that point, the chat ran along happily all afternoon, helping us to forget we weren’t all in the same room together. Jeff Scovil’s talk is always accompanied by murmurs and exclamations throughout the room in Rochester. These were replaced in the chat by “wow”, “omg” and other comments.

The usual friendly humour at one another’s expense also came out after a while. In my talk I presented one item for which I had was unable to provide a photo because, I explained, the [unnamed] photographer’s car broke down, true story. On the chat, Michael Bainbridge popped up “don’t worry, my car is fixed now“. Followed by someone’s “That’s what you get when you drive a Yugo!”, followed by another commenter “…bought used.”

Eventually, we descended to “Sit down in front!” and “Quiet in the back!”, certain friends inexplicably failing to appreciate black minerals, others debating which minerals should be bowled down the hall at the next RMS…

The last item on the official agenda was David K. Joyce – Raise a Glass and Sing! The same as in Rochester, Dave led us in song, all joining in (and indeed raising a glass): 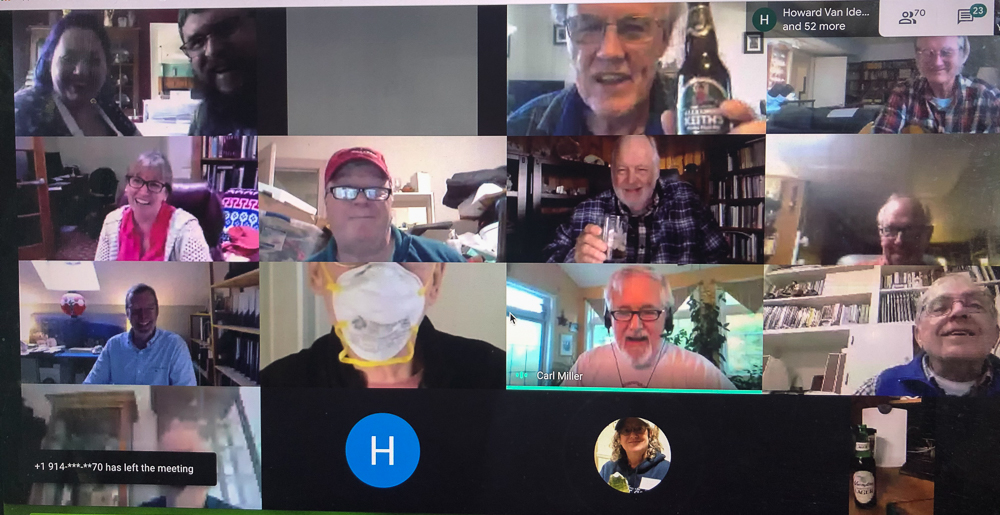 Even though we’ve usually had a couple more beverages before we start singing in Rochester, but it was as fun as always, and sure felt like we were together despite being geographically so apart. The eRMS was a great time with excellent talks, great mineralogy, super specimens, good laughs and an unmistakeable RMS atmosphere. We had participants from all over North America and also from Europe. Everyone who took part online helped to show that the spirit of Rochester is alive and well. Thank you all!

We certainly learned from the experience and we would do some things differently, for any future online endeavours. One of the trickiest parts about it was that we had limited spaces for people on the platform we were using. We planned enough room for a group the size of our average annual event – we then wanted to make sure that within our compressed timeline people on our RMS mailing list could respond and join. We therefore decided not invite too many more people or post on Facebook, concerned that we’d have too many people for what our specific platform would hold on Saturday. Hindsight being 20/20, we made the wrong call on that. Sorry to any of you who missed and would have liked to be on! Anything we do online in the future will be aimed at including as many people as would like to participate. We hope you’ll be a part of it!

Speaking of which, if you would like to hear about future events, we would be happy to add you to our email list – just drop a note to contactrms@hotmail.com and Carl Miller, our registrar, will add you. We hope not to have to miss any future annual RMS events, but even so, we are thinking of ways in which we may include online access in the future.

The program notes for the eRMS 2020 are posted on the RMS webpage here . The notes include abstracts from the technical submissions we received this year.