Pete Richards is one of the world’s foremost experts on crystal shapes and the phenomena that influence them. He has published many writings on a wide array of mineralogical topics and his crystal drawings are featured in publications around the world. And… he has been a lifelong avid mineral collector, with an extensive and diverse mineral collection. 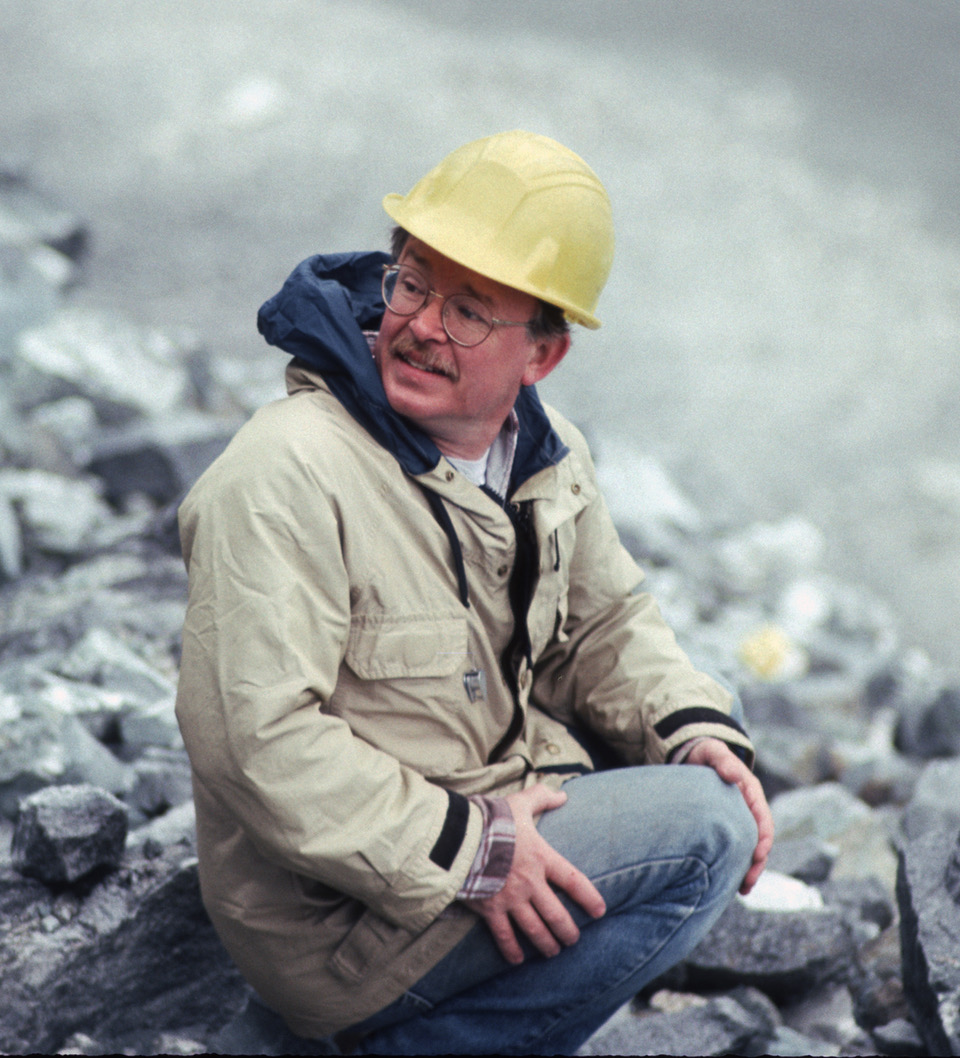 Pete is a good friend with a great sense of humour, with mineral friends all over the globe. Beyond all his published contributions, Pete is incredibly generous with his knowledge, teaching mineral friends about crystallographic phenomena, one example at a time.

I first met Pete Richards at the Rochester Symposium at the beginning of the 1990s. (Pete has been attending and contributing at Rochester since 1985.) I know my Rochester experience was a familiar one that other collectors have had too. I have always loved crystal morphology and twinning, and someone told me I had to meet Pete, so off I went, looking for him through the dealers’ rooms…

I don’t have a photo from that fist meeting of course, but I do have photos of Pete from Rochester – here with his good friends, two other crystal rogues: 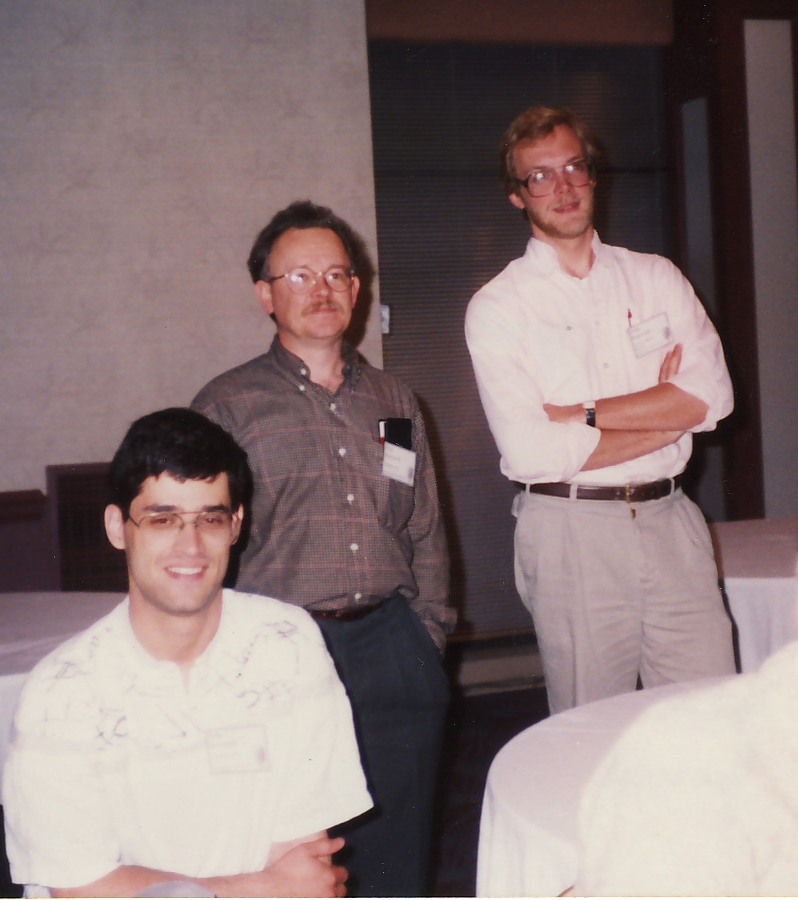 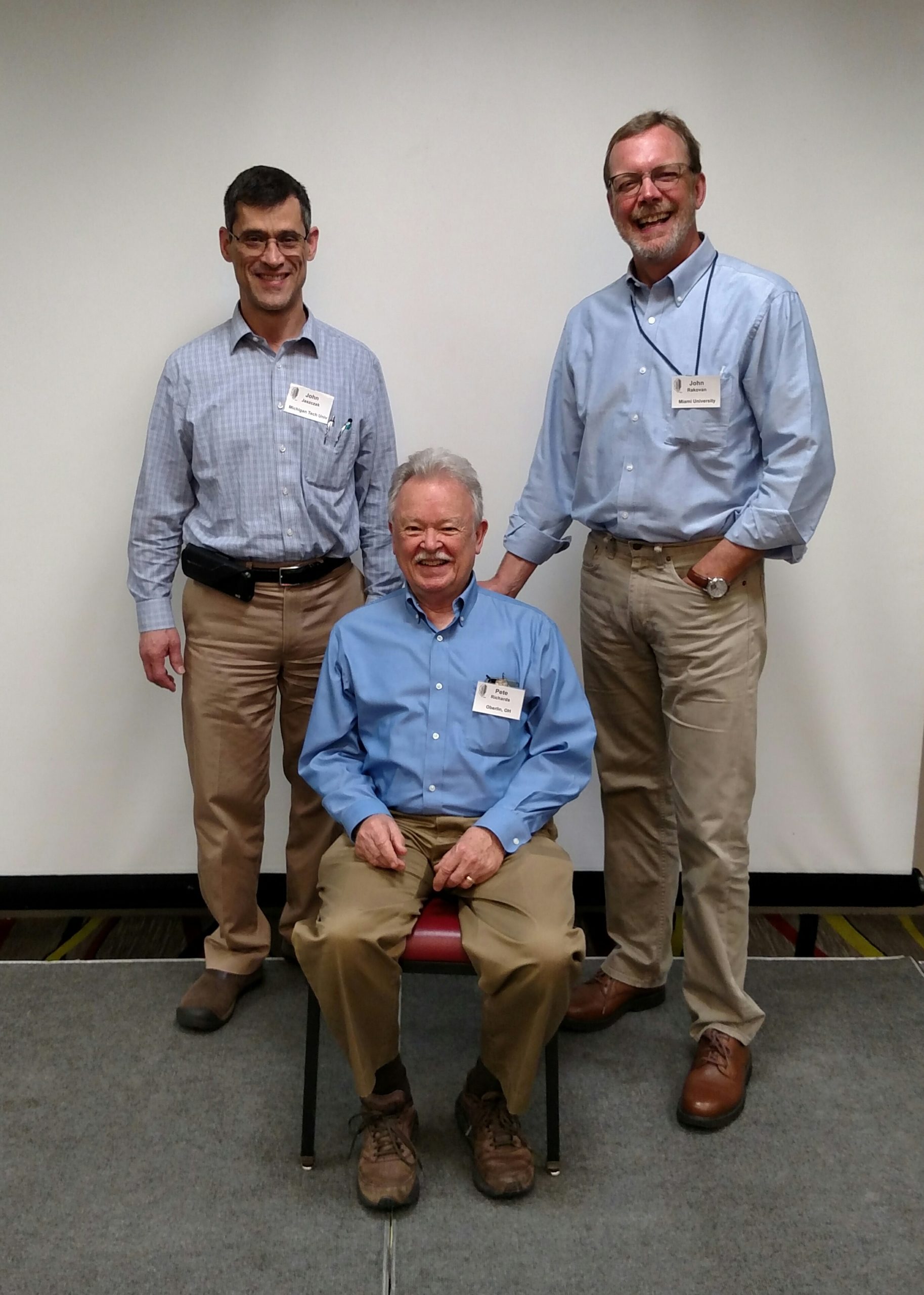 Pete may be the only person who has ever handed me a business card with “Morphological Crystallographer” as his title, but much more than that, Pete is as passionate and knowledgable about crystallography as anyone I’ve met.

Pete was born in 1943 in Oberlin, Ohio, where he and his wife Prue live today. He has been a mineral collector since age 2, and growing up in the zeolite region of northern New Jersey, he wished he had adult friends who would take him into quarries. Instead, he picked up mineral-bearing bits of gravel in driveways and along railroad tracks, and eagerly accepted hand-me-downs from a neighbour whose uncle collected frequently at the nearby Bound Brook Quarry. 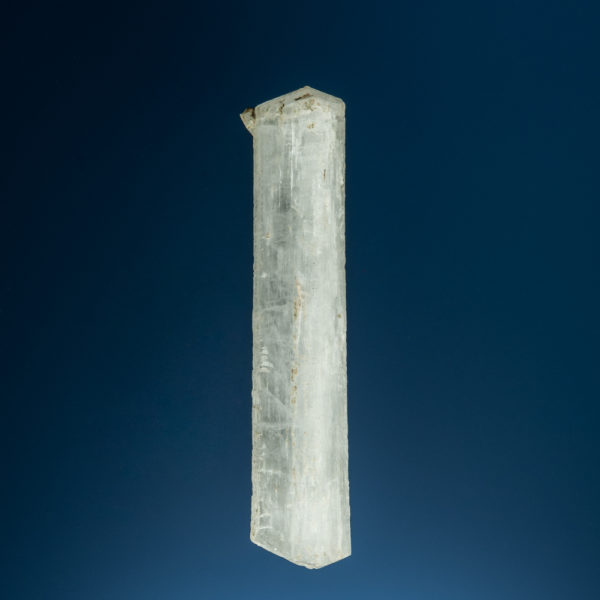 Summers in the pegmatite district of Maine were a strong boost to his interest in mineralogy, except that his mother limited his collecting to one Ritz Cracker box full of rocks per trip. 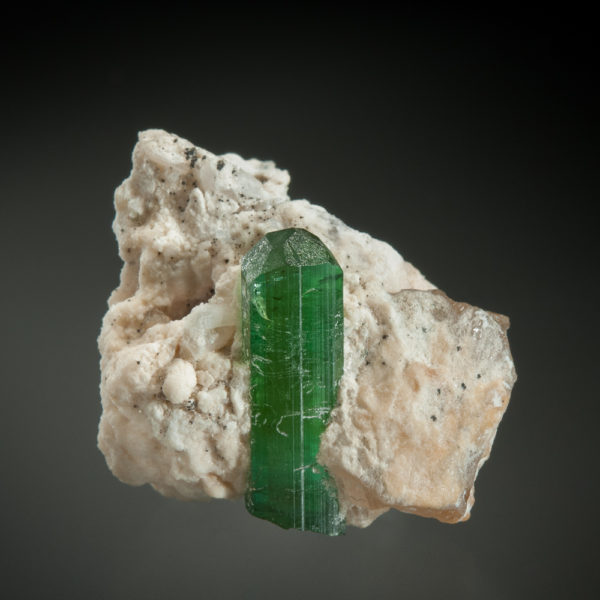 From the very beginning, Pete’s interest in minerals was inspired by a fascination with the shapes of crystals. At the University of Chicago, Pete obtained his masters degree in mineralogy and paleontology in 1968, and his PhD in paleoecology in 1970. For Pete’s 35-year career, he was a water quality scientist in what became the National Center for Water Quality Research. He was the Water Quality Labratory’s Director from 1999-2002 and retired in 2014.

Pete has many mineral publications to his name, including in American Mineralogist, Mineralogical Magazine, The Mineralogical Record, Rocks & Minerals, The Canadian Mineralogist, and Schweizer Strahler. He developed and maintained the Macintosh version of the crystal-drawing program SHAPE for many years. Crystal drawings by Pete are all over the world in various publications. 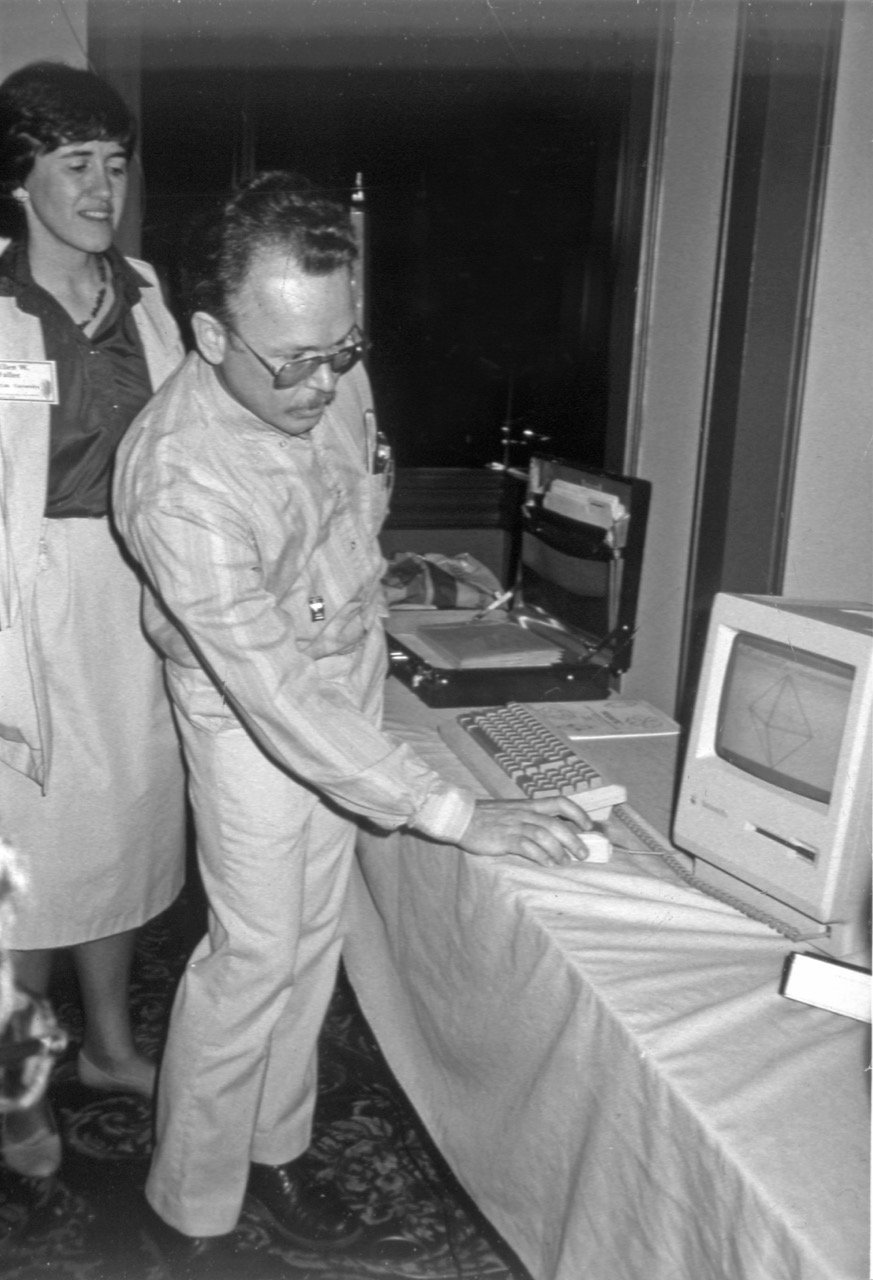 Pete giving a demo of an early version of SHAPE for Macintosh at the
Rochester Mineralogical Symposium, 1988 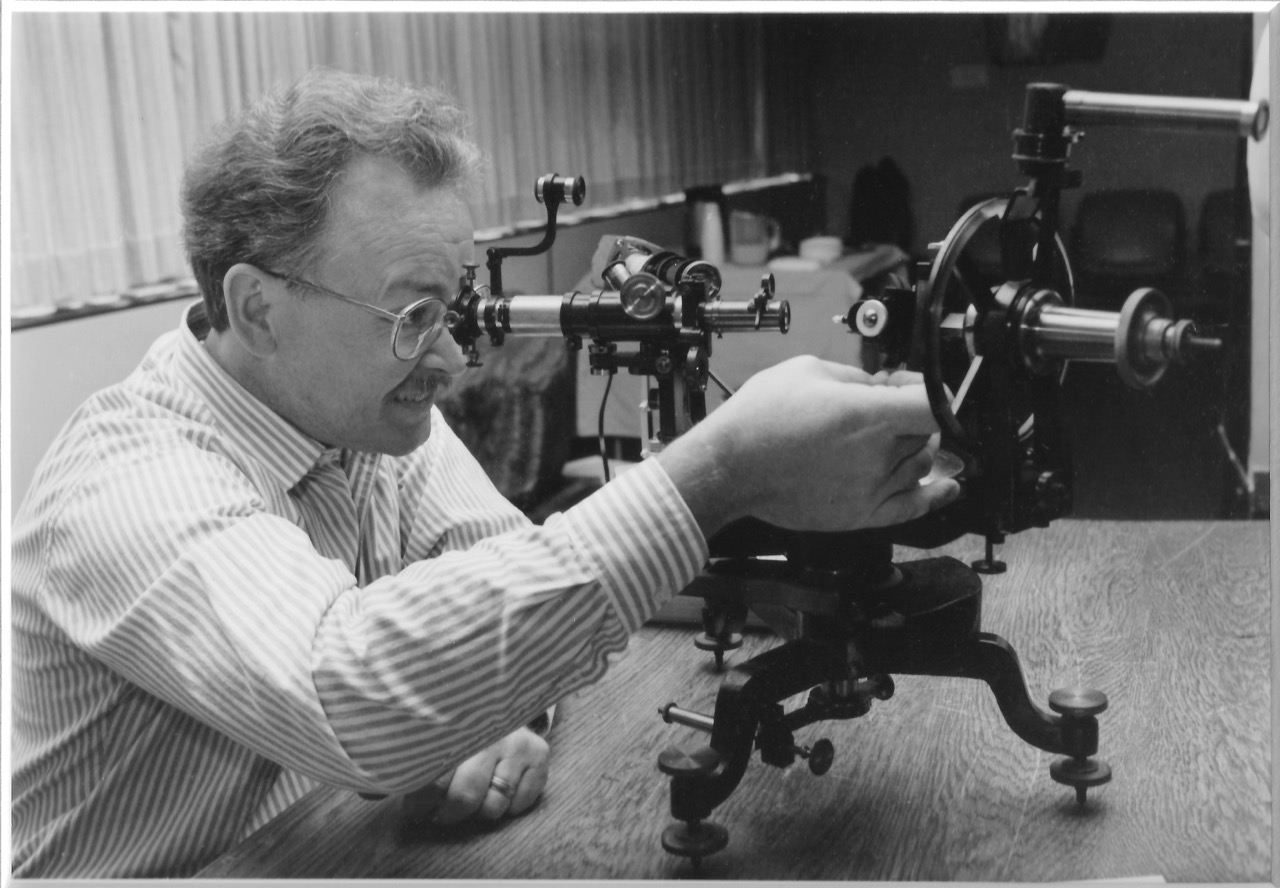 Some of Pete’s contributions have involved research and published papers in respect of new minerals, including his superb recent work on the minerals of the Huron River shale fire, near Milan, Huron Co., Ohio.  Other articles have explored particular crystallographic issues and occurrences – his 1990 Mineralogical Record article “The Origin of Faden Quartz” is the definitive explanation of faden quartz growth – if you haven’t read it, it’s an absolute must-read!

In case you need encouragement to go and read it, here’s one of Pete’s many diagrams that is explanatory and explained in the article: 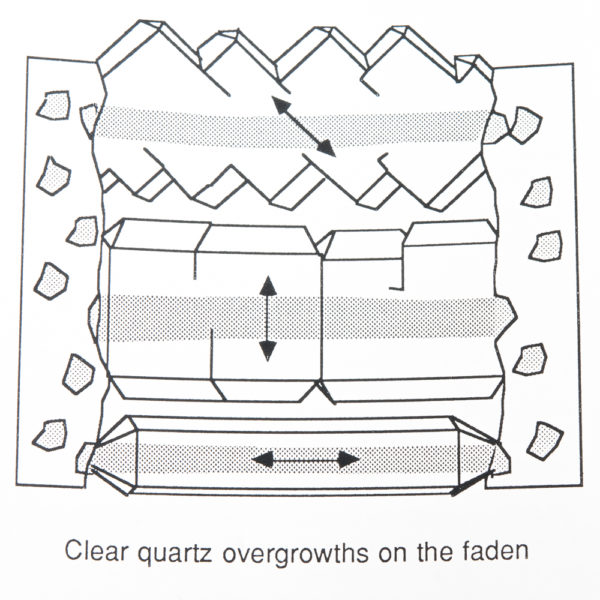 And an example of a faden quartz specimen: 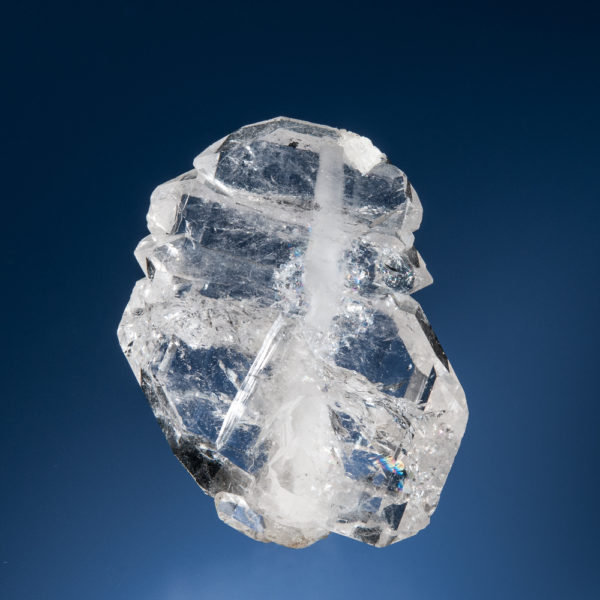 Another article that provides the reader a “eureka!” moment is the one he co-authored with Bill Henderson and Don Howard in the Mineralogical Record ten years later, “Elongated Twins of Sodalite and Other Isometric Minerals.” This article explains specimens with an unusual form, in a way that all of a sudden (upon reading) makes sense. (!) For this paper, the authors shared the honours for the Best Paper of the Year 2000 in the Mineralogical Record. Another great read! Here’s a teaser:

First, here’s the classic illustration of an unusual sodalite crystal morphology from Dana, 1898
(full citation below): 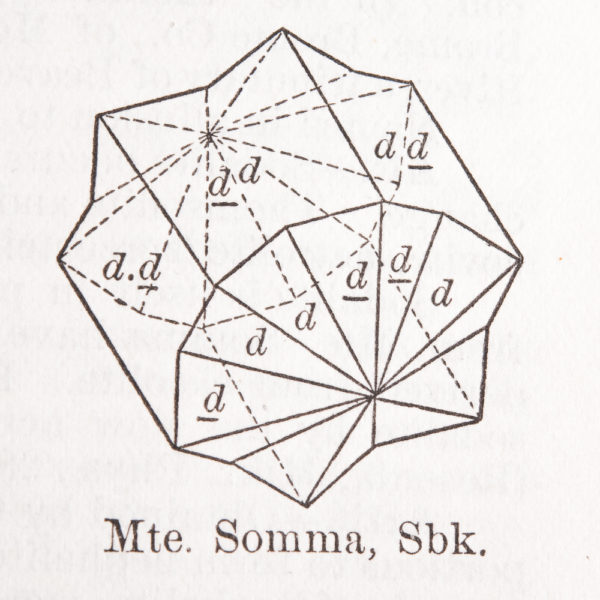 And next here’s Pete’s diagram explaining dodecahedral twinning on 111, generated using the SHAPE program and included in the Mineralogical Record article (full citation below):

Pete is an active contributor in mineralogy in several other ways as well – he is a consulting editor of Rocks & Minerals magazine. He is also a long-time micromounter, inducted into the Micromounters’ Hall of Fame in 2010. 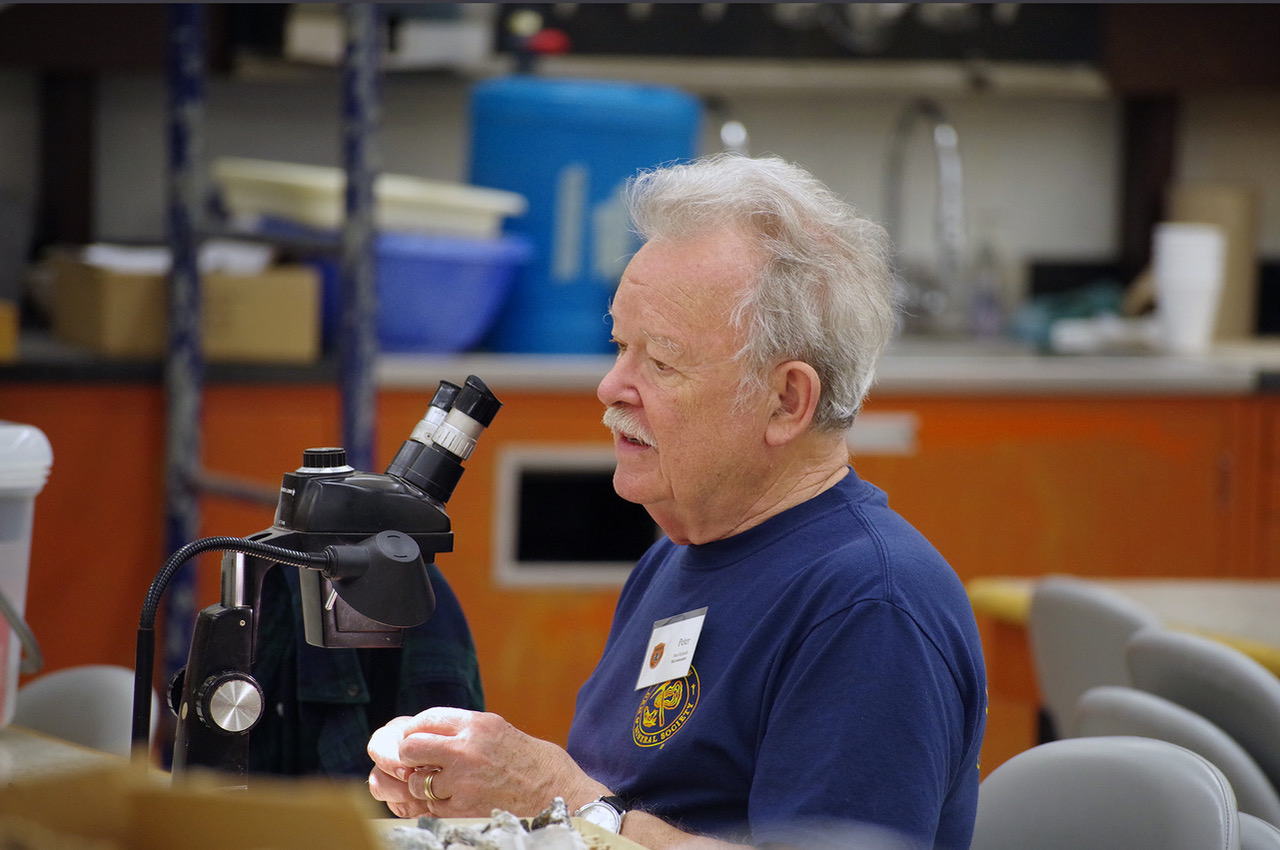 Pete at the Canadian Micro-Mineral Association in 2018

In 2020, a new mineral was named richardsite, in Pete’s honour. The mineral is Zn2CuGaS4, occurring as dark grey crystals on wurtzite from Merelani, Tanzania (full description in Bindi and Jaszczak (2020), citation below). Well-deserved! If you’d like to hear a bit more about it, there is a link below to a presentation made at the Rochester Symposium (online) in April, 2020.

As a collector, Pete has assembled a large and impressive collection including suites reflecting certain areas of interest (such as twins, epitaxy and a very large Mont Saint-Hilaire suite). His specimens include many personally-collected pieces from localities all over, particularly New England, New York and the Midwest, as well as Mont Saint-Hilaire and other Canadian localities. 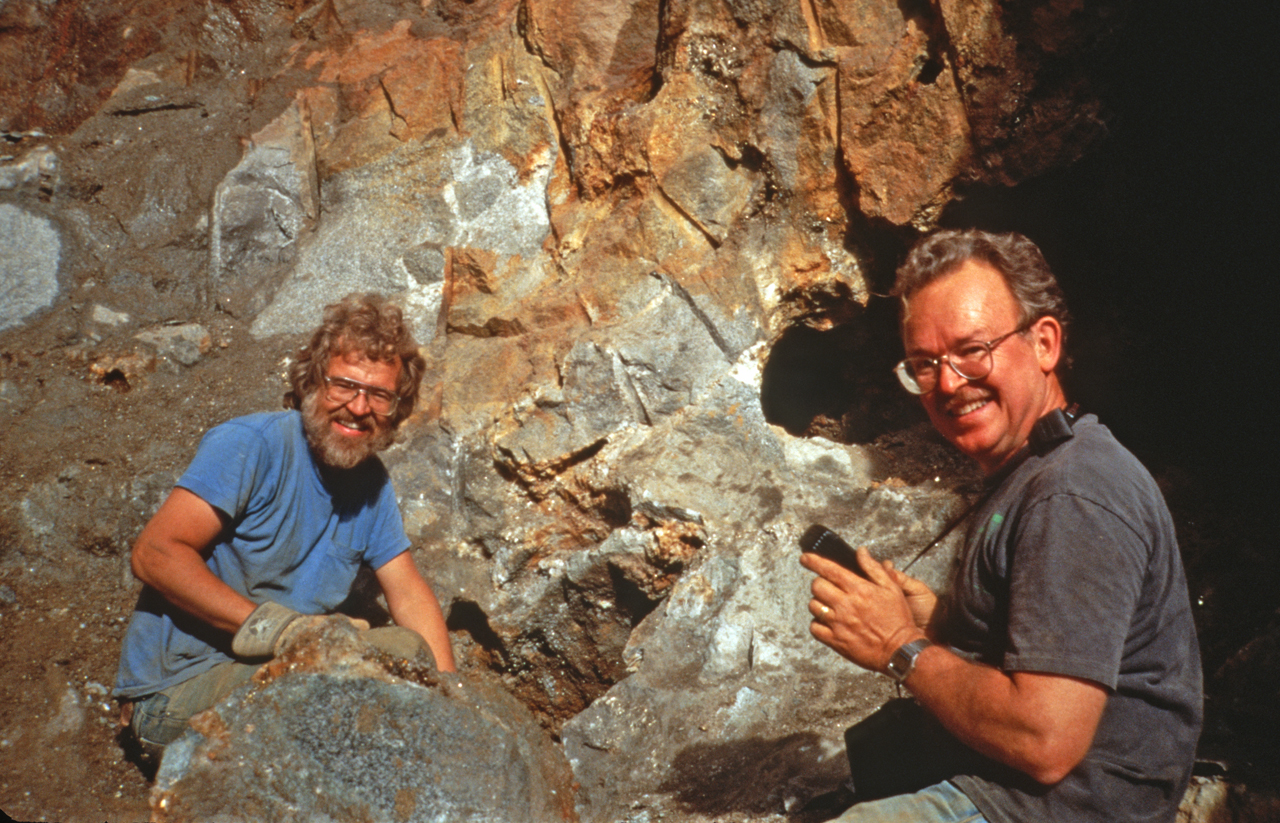 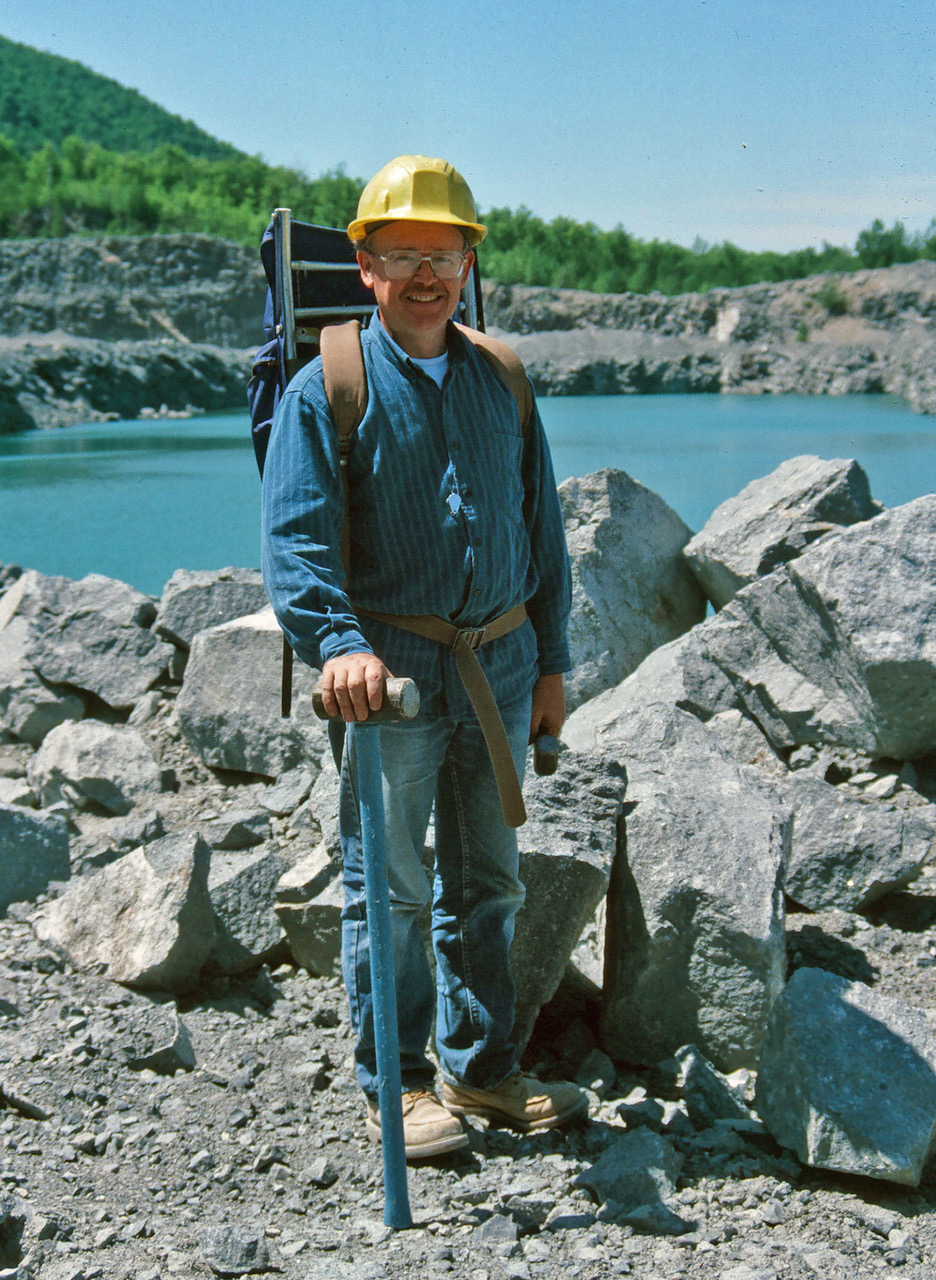 The next photo… on a Mont Saint-Hilaire weekend with other well-known MSH collectors Steve Szilard and Tony Steede… well, see if you notice what’s wrong in this photo… 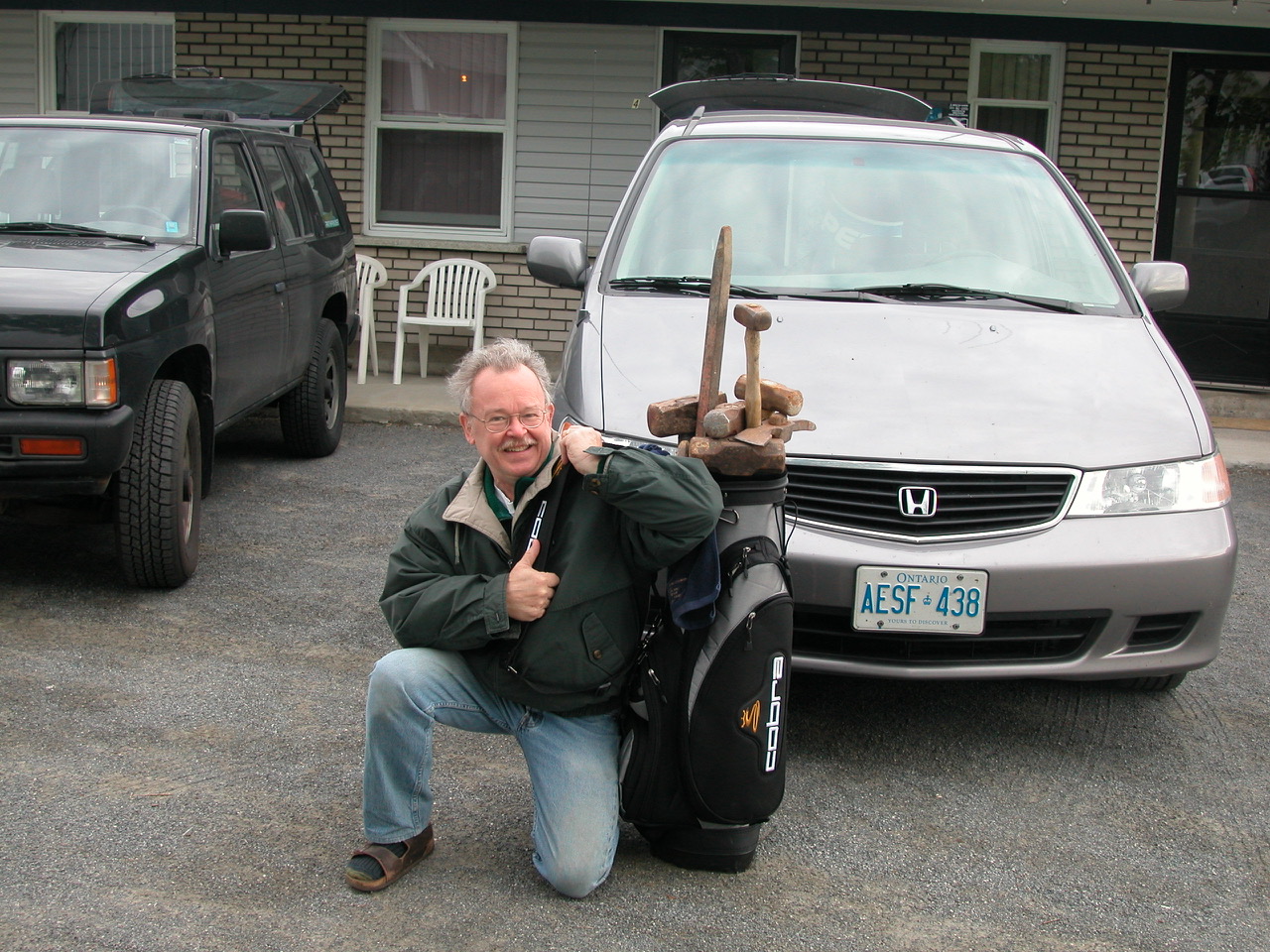 Pete with a golf bag stuffed with an impossible weight of collecting steel,
ready for battle at Mont Saint-Hilaire

Pete’s refined mineralogical taste has meant that his collection includes many beautiful and unusual crystal specimens and species! 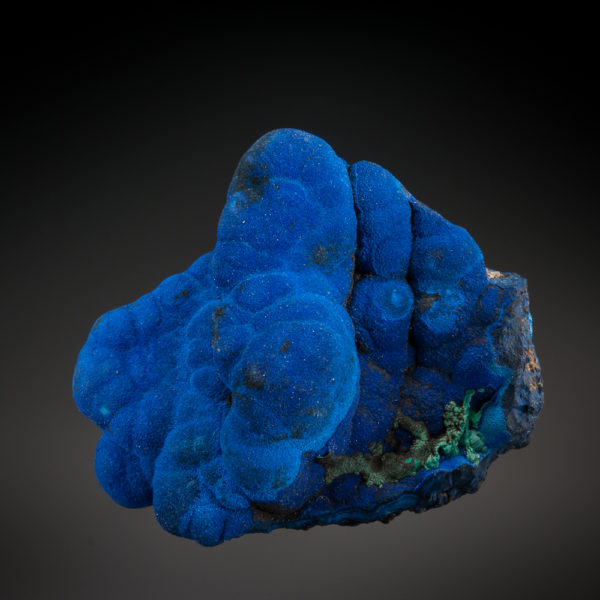 Pete has been a field collector since those early days along the railroad tracks, and his collection includes many excellent personally-collected specimens. 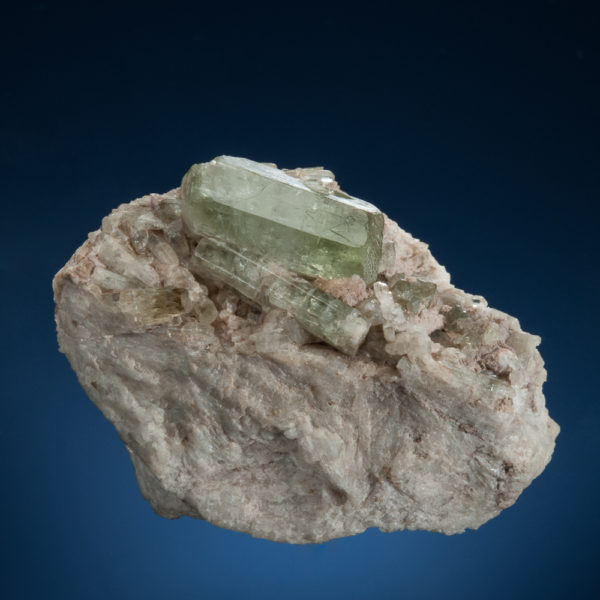 Pete and I collected together when he last came up to Ontario for a visit… It was October, a beautiful time of the year in the Bancroft area, and we headed out to the Tory Hill vein dikes for a day of collecting. Sunshine gave way to some clouds and then with no warning we were being pelted by miserable snow and ice pellets… (such as is possible much of the year in Canada). Fortunately the sun did come out intermittently and we found some excellent fluoro-richterite crystals… so the Canadian weather was soon just an amusement on a fun day in the woods.

Pete is so helpful and genuinely keen whenever we encounter a curious crystallographic phenomenon. I thought it might be fun to relay an example of the way Pete is teaching us about crystals one specimen at a time. I had a gorgeous sapphire crystal from the Steve Szilard collection and Johann Kjellman (of the Museum of Evolution, Uppsala, Sweden) brought to my attention that he believed it was likely a twin. I had to admit that I had no idea corundum twinned in this way, and I wanted the description on the website to be accurate. Since it can be pretty difficult to be definitive on these kinds of questions, I thought more opinions might be helpful. I sent an image off to Pete (along with John Rakovan and John Jaszczak) for some insight. Pete came back to us all with a full analysis of the specimen and the conclusion that it’s very possibly a twin, although X-ray study would be needed to confirm. Pete’s analysis included the consistency of this specimen with known corundum twinning, and observations that the irregular tapers and the size difference of the crystals make this one tricky with only visual analysis, but he also included a projection of two evenly-sized crystals to illustrate the idealized twinning: 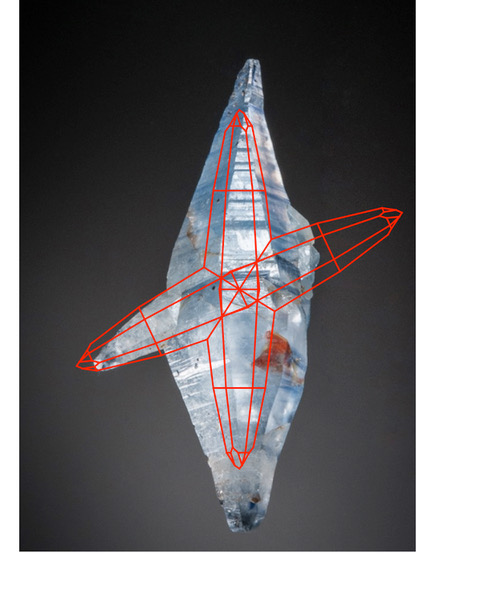 (As a footnote to that story,  Johann also provided historic literature on exactly this kind of corundum twin studied from this locality.)

And of course Pete is passing his love of minerals along to mineral collectors of all ages and stages, including to younger generations… 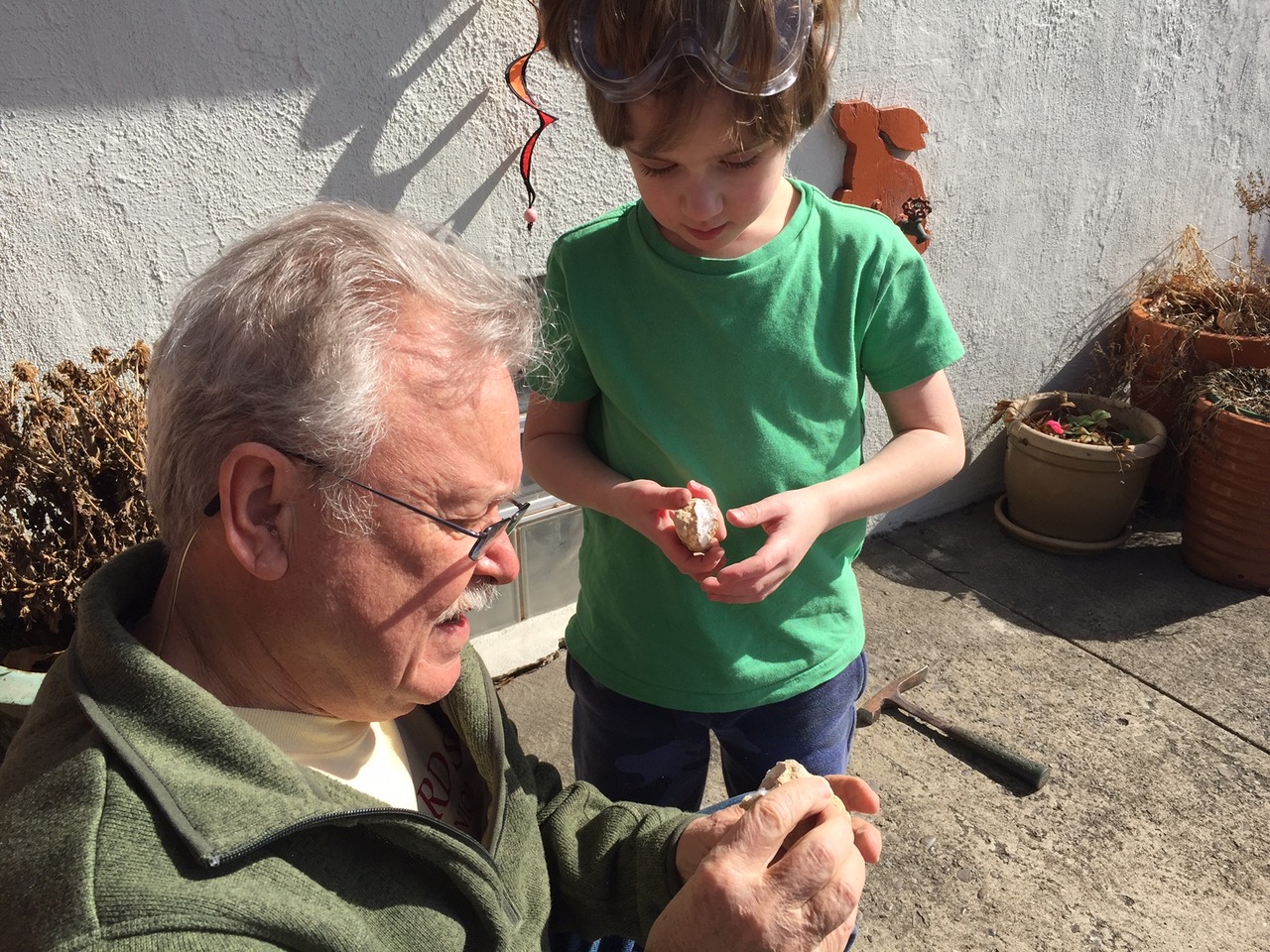 Opening geodes with a grandson

I’ve learned lots from Pete over the years! When it comes to crystals and complex crystals, no matter our age or experience, we are all so grateful to be able go to Pete for his thoughtful guidance.

[Ed. note The above was entitled “Mystery Subject” so Pete would not know it was being presented at Rochester until the presentation.]

If you have landed on this page directly through a search or are otherwise not familiar with this website or the Rochester Mineralogical Symposium (the RMS), it’s a great annual event. Usually, it is a reunion in person in Rochester (if you’d like to read a report, I post them each year, and 2019 is  here), and during the pandemic, it is online as the e-RMS (the full eRMS 2020 is online here).