When I think of Tucson, it’s sunny with blue skies, and the temperature is pleasantly warm (for any Canadian in January!), with cool nights. Of course the landscape is generally dry and cacti thrive, while the riverbeds are free of water.
I’ve seen a bit of weather variety in Tucson, but in all the years I’ve been attending the Tucson show, I’ve never seen it like it was in the early days of Tucson 2015. 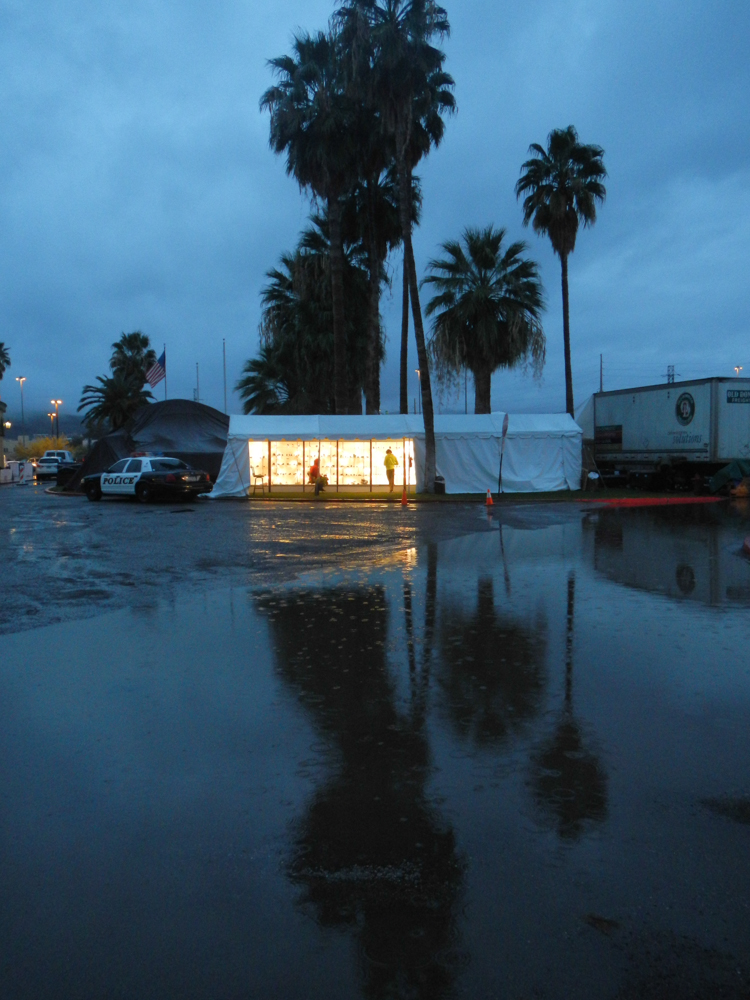 It was reported in the news that at the height of the storm days, 12 cm of rain had fallen on Tucson in 24 hours. (My Canadian brain pictures precipitation amounts better when expressed as an amount of snow – and with the most commonly used average rain:snow ratio of 1:10, that would have been 120 cm, or approximately 4 ft, of snow). 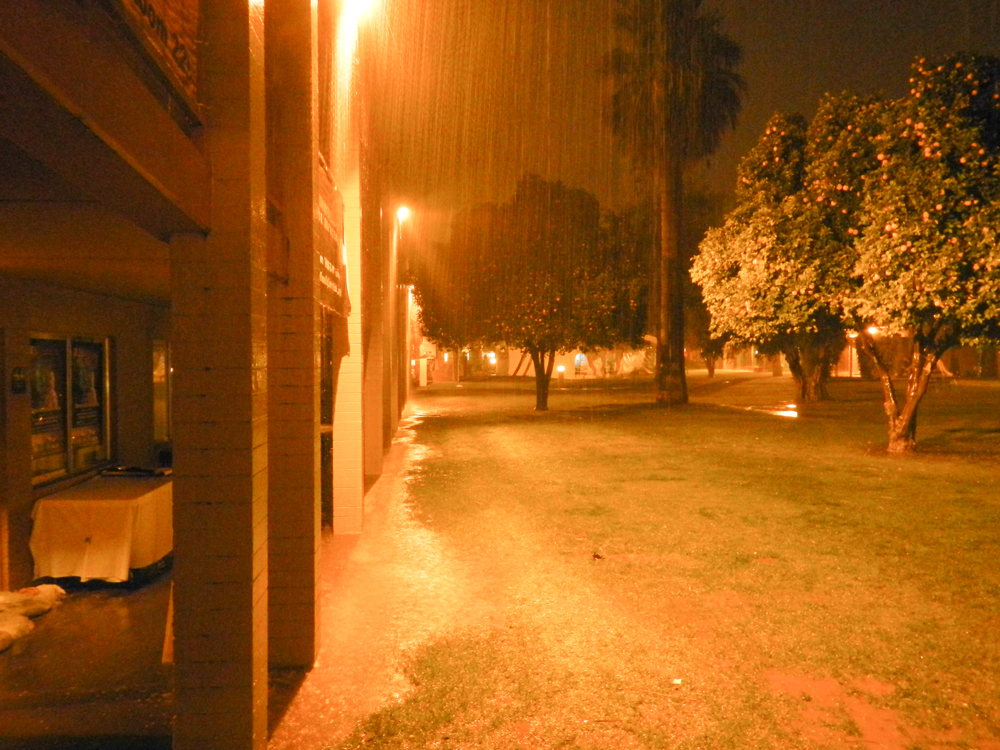 Courtyard flooding, with no dry spot to step 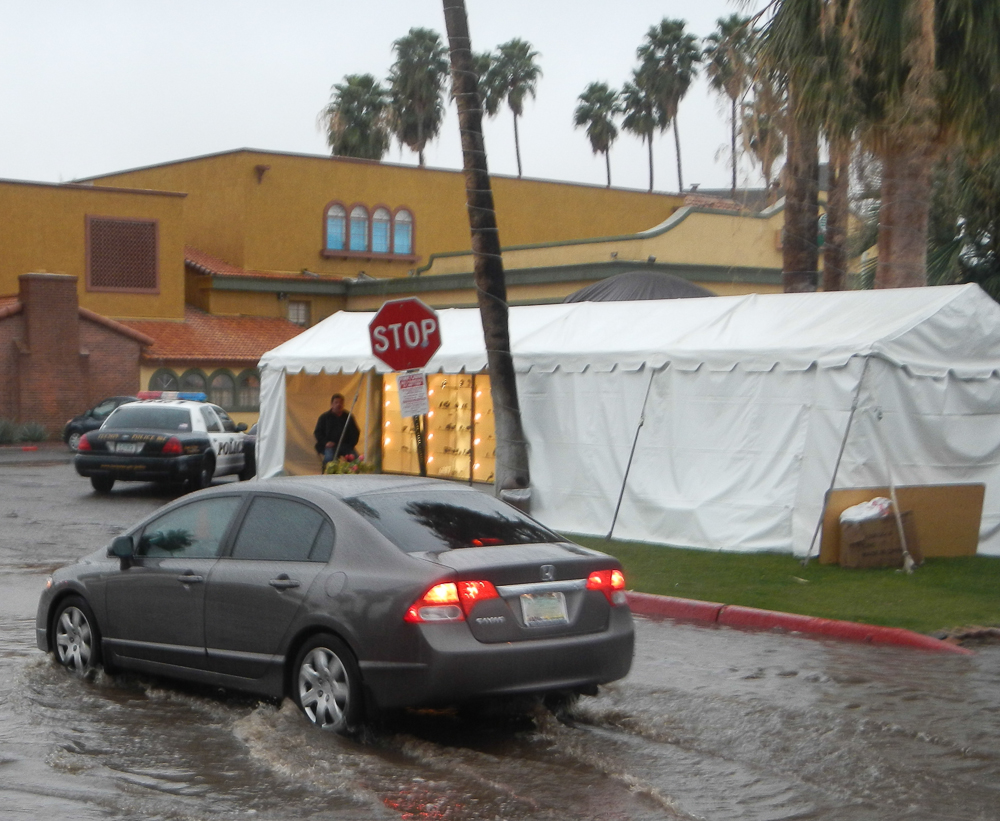 Roads flooded in many places

The riverbeds and floodways around Tucson did their job admirably, while drains efficiently kept the underpasses clear. For the most part, difficulties arose where properties were not graded and older roads were not properly crowned or had fallen into disrepair. However, even the flooded zone on Main remained passable by car, and as for the passageways around ungraded areas at the mineral shows… we all managed. (It would have been hard to make it through the storm days with dry feet, but when you’re searching for minerals, who notices these things?) 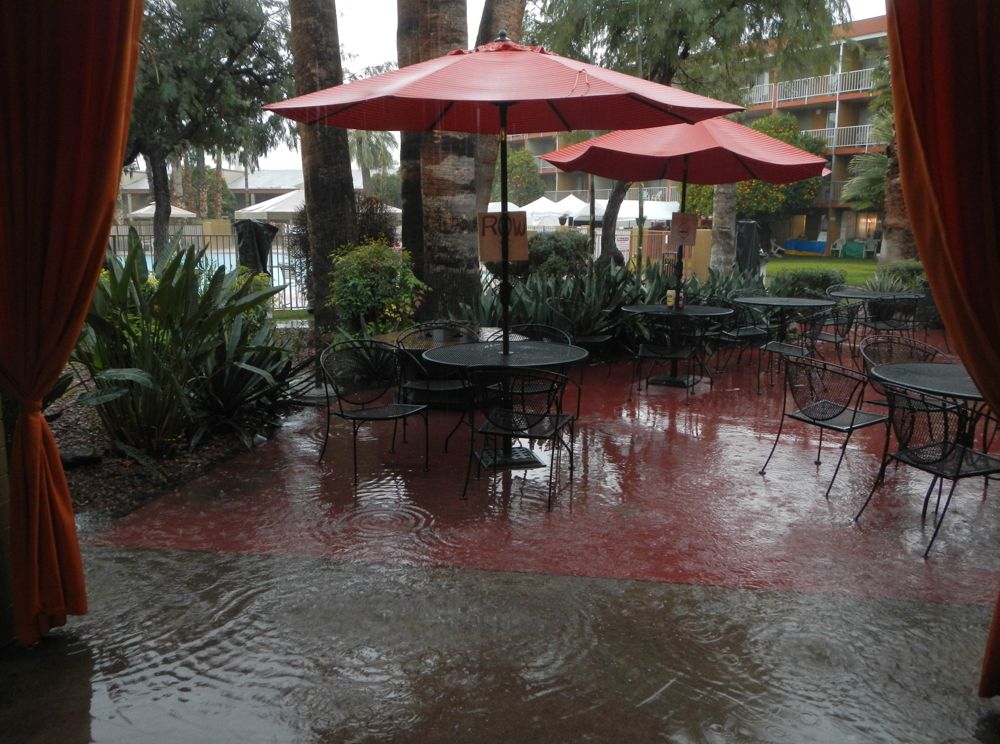 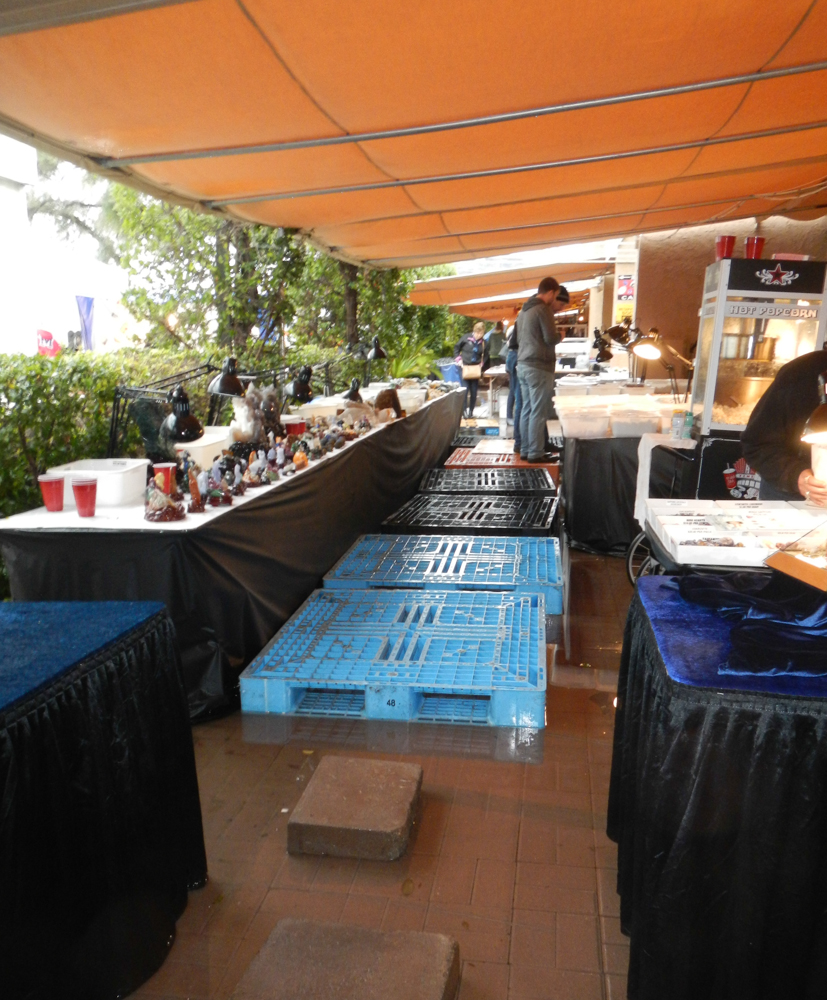 At the Riverpark Inn, makeshift walkways and stepping stones were set up to make it possible to get around 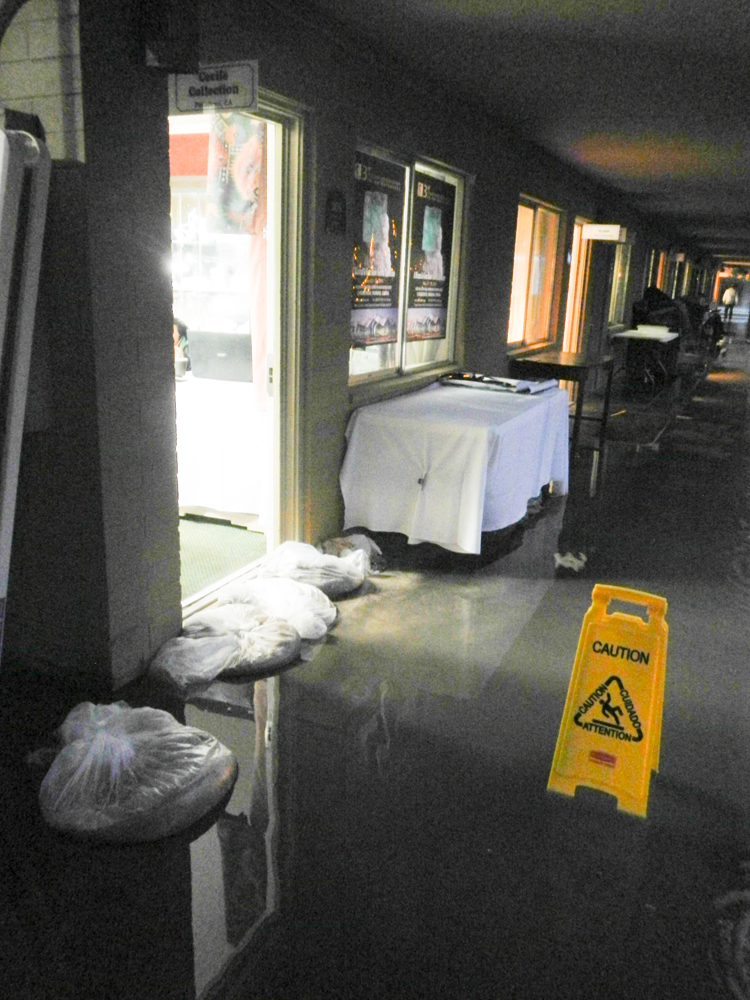 (*Like “The Artist Formerly Known As Prince”, to mineral people, this is thought of as “The Hotel Formerly Known as the Inn Suites”, and referred to by most of us simply as the “Inn Suites” for short. Technically it is now named the “Hotel Tucson City Center InnSuites Conference Suite Resort” but you can see why none of us call it that.) 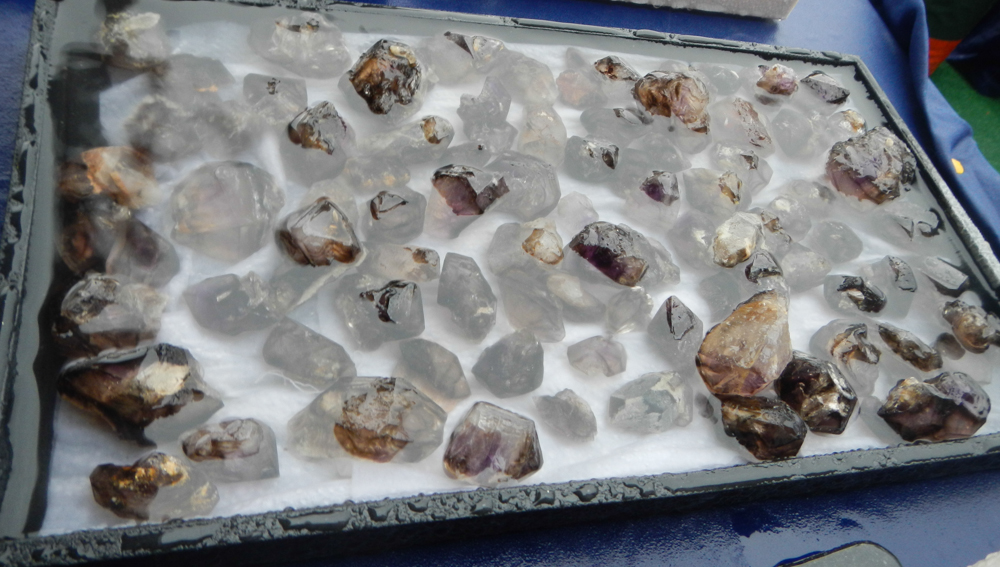 Anyone who likes to lick agates or oil their specimens was saved all the trouble if they simply stayed outdoors, where vendors’ flats quickly filled with water. (This one held its own, but things got ugly when it came to cardboard flats and paper towel…)

So with that colourful backdrop, Tucson 2015 unfolded as Tucson always does, at all the various locations around the city. And there were great minerals to be found this year.
Starting with something new and unusual, some excellent specimens of anhydrite and probertite were found in a pocket at the Kohnstein Quarry, Niedersachswerfen, Nordhausen, Harz, Thuringia, Germany. The anhydrite crystals are amazing – euhedral, very pale lilac, translucent to transparent. I am told that although they are encountered at this locality once in a while, this is only the third time in the last 30 years, so it is not a common occurrence! Probertite is a relatively rare borate mineral that occurs as transparent, colourless, heavily striated, lustrous crystals (it is certainly rare in crystals such as were found in this pocket). I picked only a small number of specimens from this find, the best I saw, from what was a fairly small lot (it was not a large find). 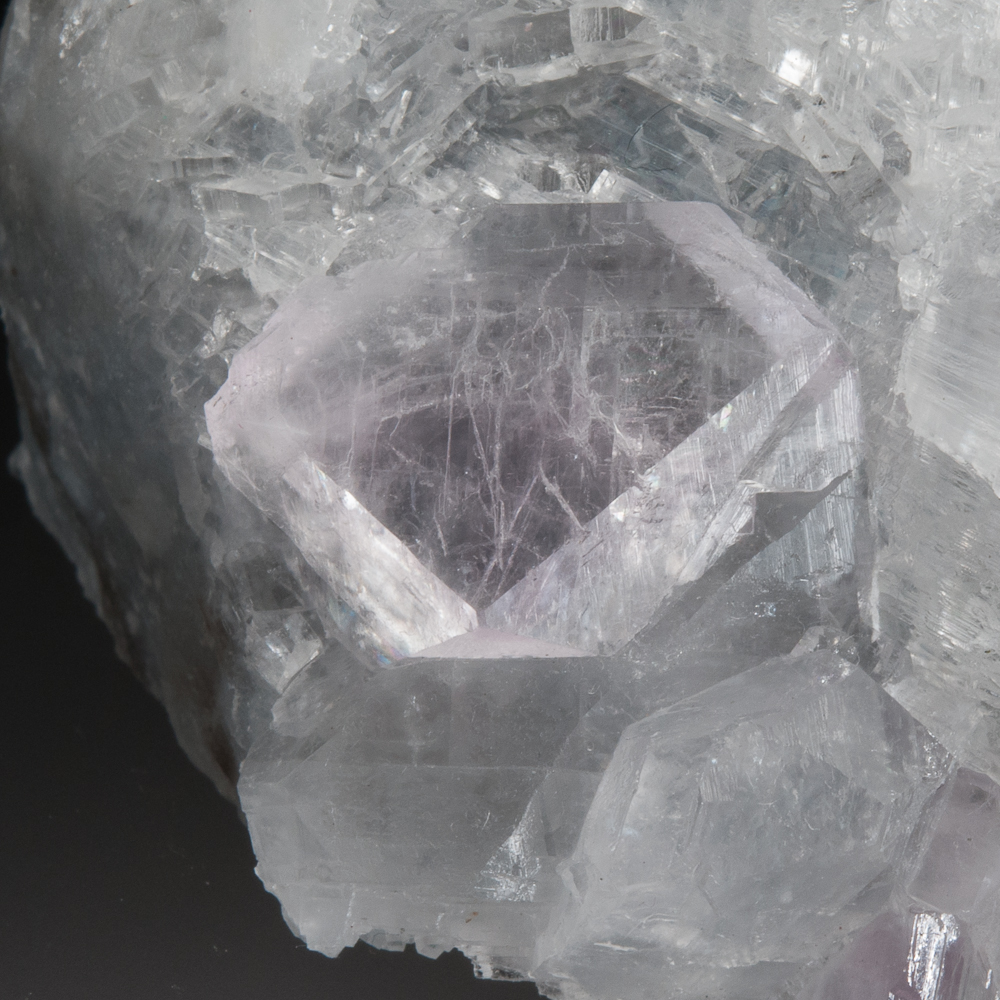 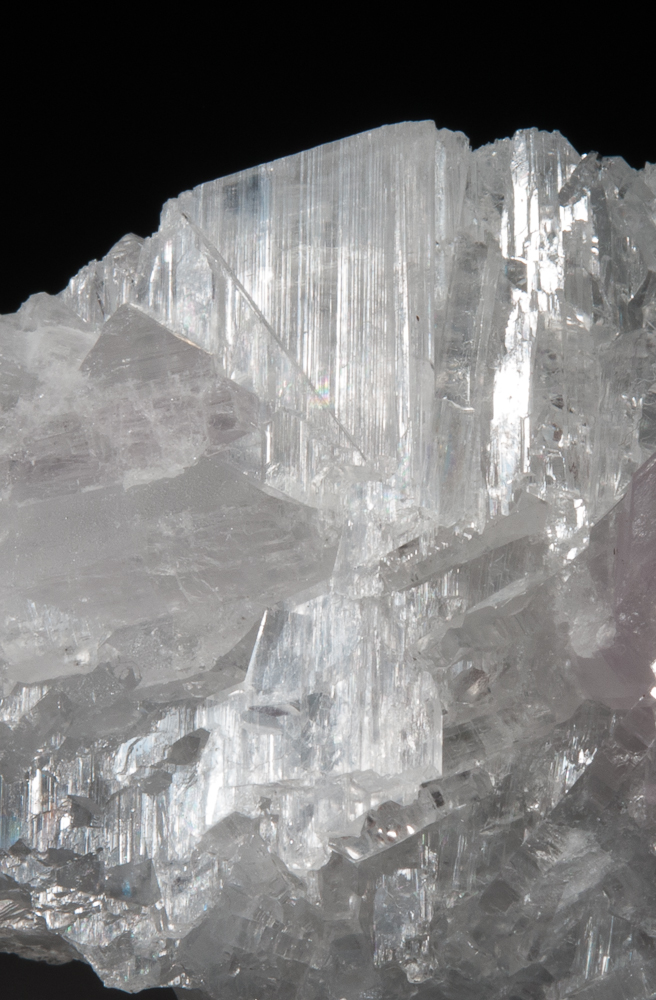 Moving a long way south… to South Africa, a very small pocket at the N’Chwaning II Mine produced a handful of exquisite small specimens of inesite, very sharp and intricate, and in superb condition. I was lucky to have the first chance at these and, again with this pocket, selected out only a few specimens, the ones I judged to be the best. 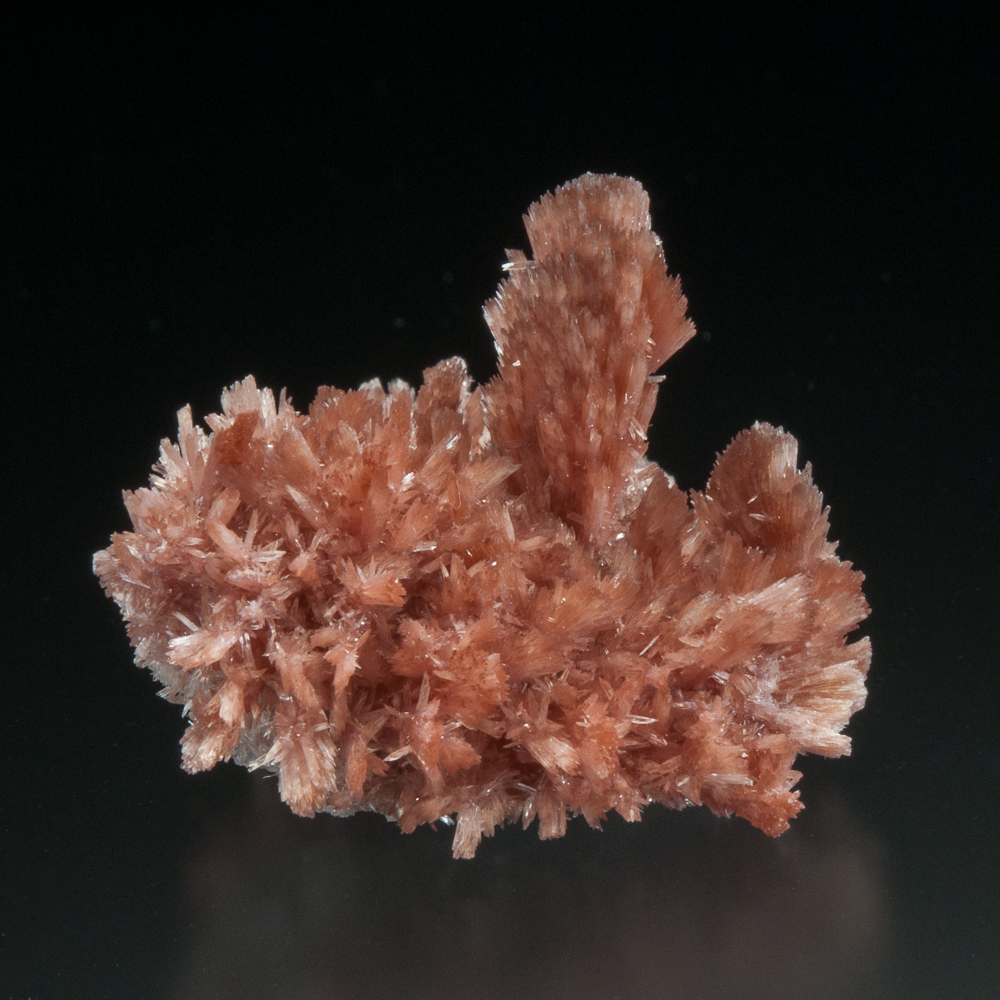 Democratic Republic of the Congo is almost always producing mineral specimens of interest, and this year I was struck by the new lot of cobaltoan dolomites from the Katanga Copper Crescent. When I say “struck”, you’ll see why – some of the colour is just amazing. 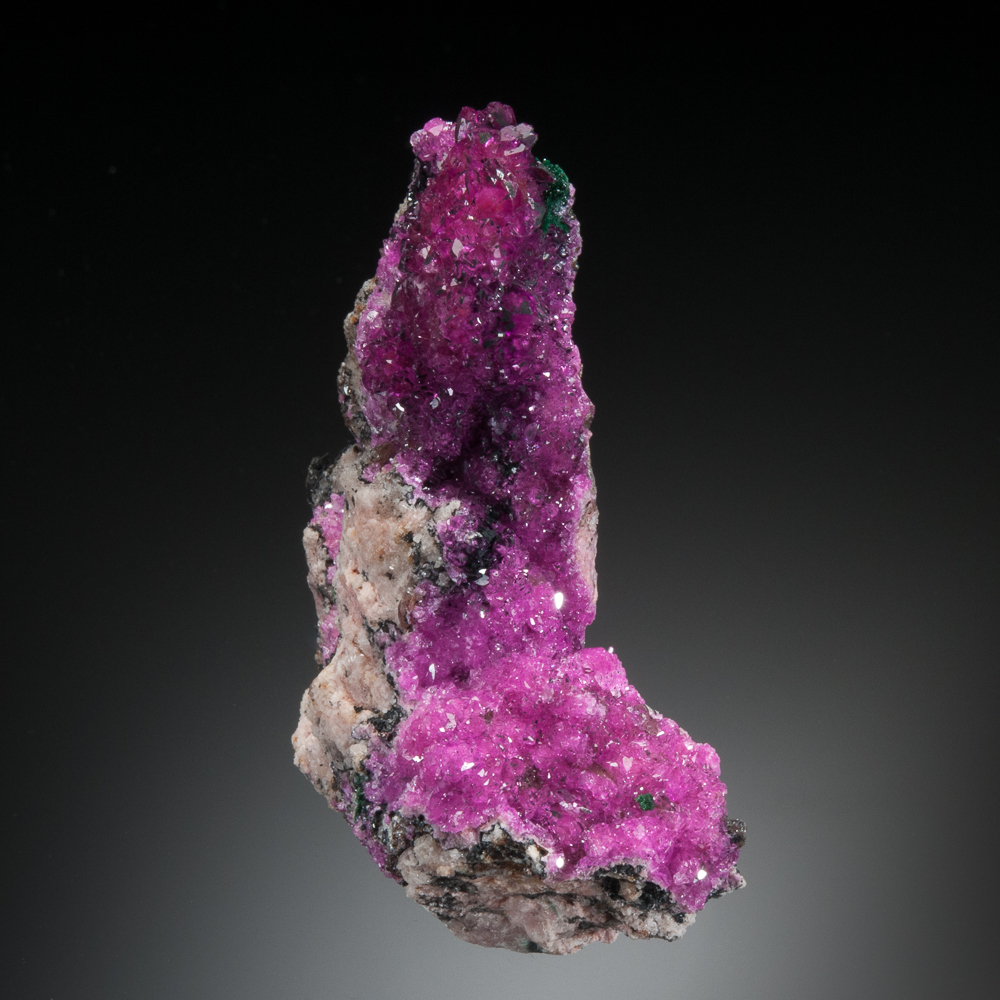 Only a few things of interest from China – not much new with the vendors I visited. (Very few of the new plumbogummite pseudomorphs after pyromorphite – it seems these had been snapped up.) There were aggregates of new dark green fluorite in mounds, but I wasn’t that keen on them and the prices were silly. From one vendor I did manage to pick up a couple of nice specimens from the 2014 pocket of blue fluorite on quartz from Huanggang. Since they debuted in Denver, most of these have been astronomical, damaged, and commonly both (!), so it was great to find these. The specimen below is comprised of two main quartz crystals (both have their upper terminations intact), coated with a secondary phase of small opaque white quartz crystals and finally the deep blue fluorite is crystallized on top. 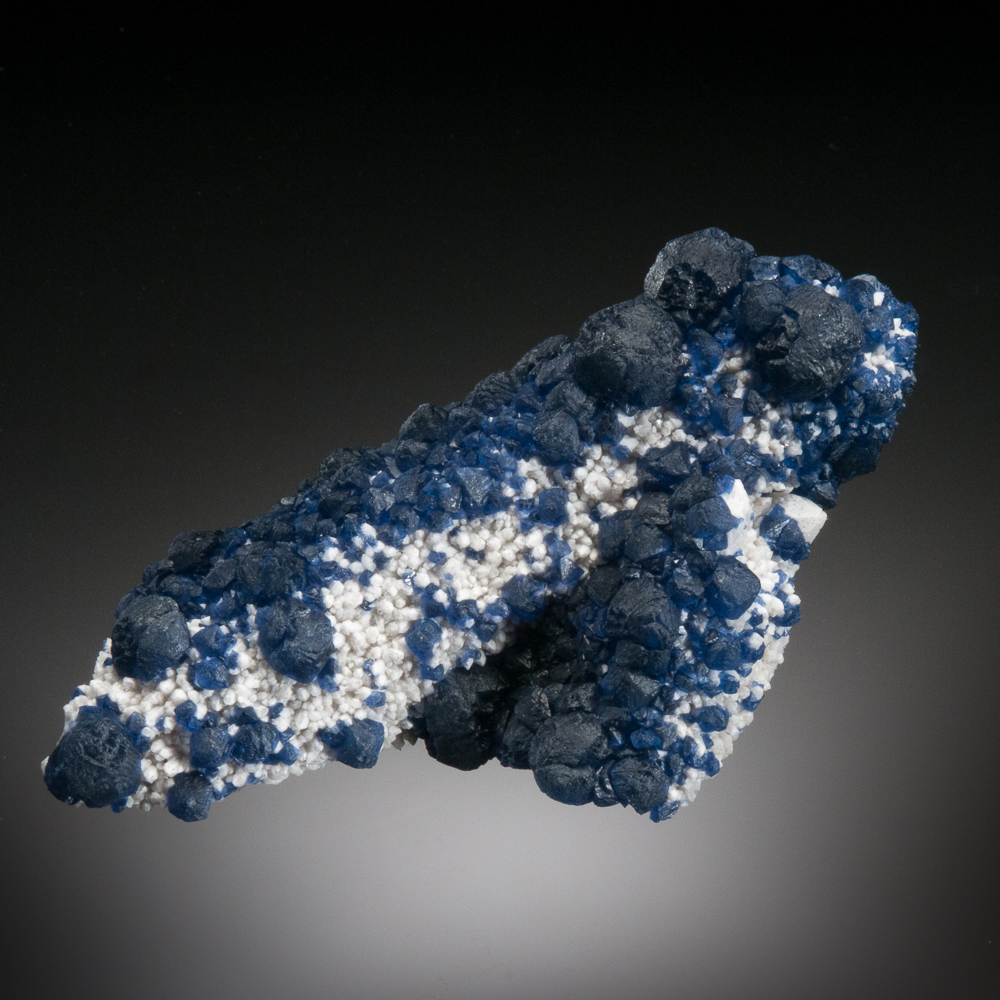 With another Chinese seller who had really nice things and was a true pleasure to talk to… I’m told that there have been no big recent finds at the Daoping Mine, the famous pyromorphite locality, but there was a pyromorphite from a recent very small pocket that caught my eye, both for its overall aesthetics and also because the crystals are not hoppered – they have pyramidal faces at the terminations, unlike so many from the locality. Neat! 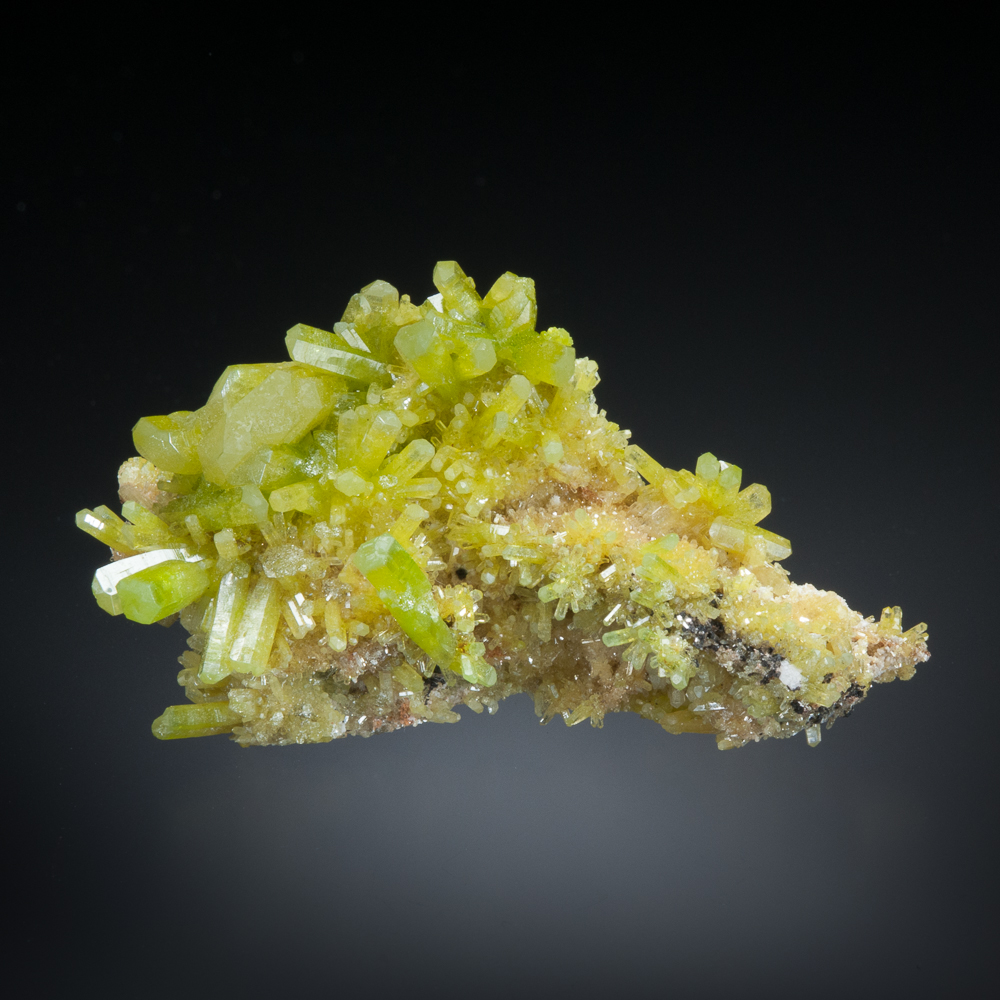 From Russia, there are still new things from Dal’negorsk, both from new production and older collections within Russia trickling onto the international market. From new production, a pocket at the Nikolaevskiy Mine has produced a small number of very cool calcite specimens. I don’t know how it happened, but in the same pocket and at the same time, calcite crystals were forming in both scalenohedral and discoidal forms, sometimes on the same crystal. These are delicate and sadly almost all I saw were damaged, but I found three excellent ones. 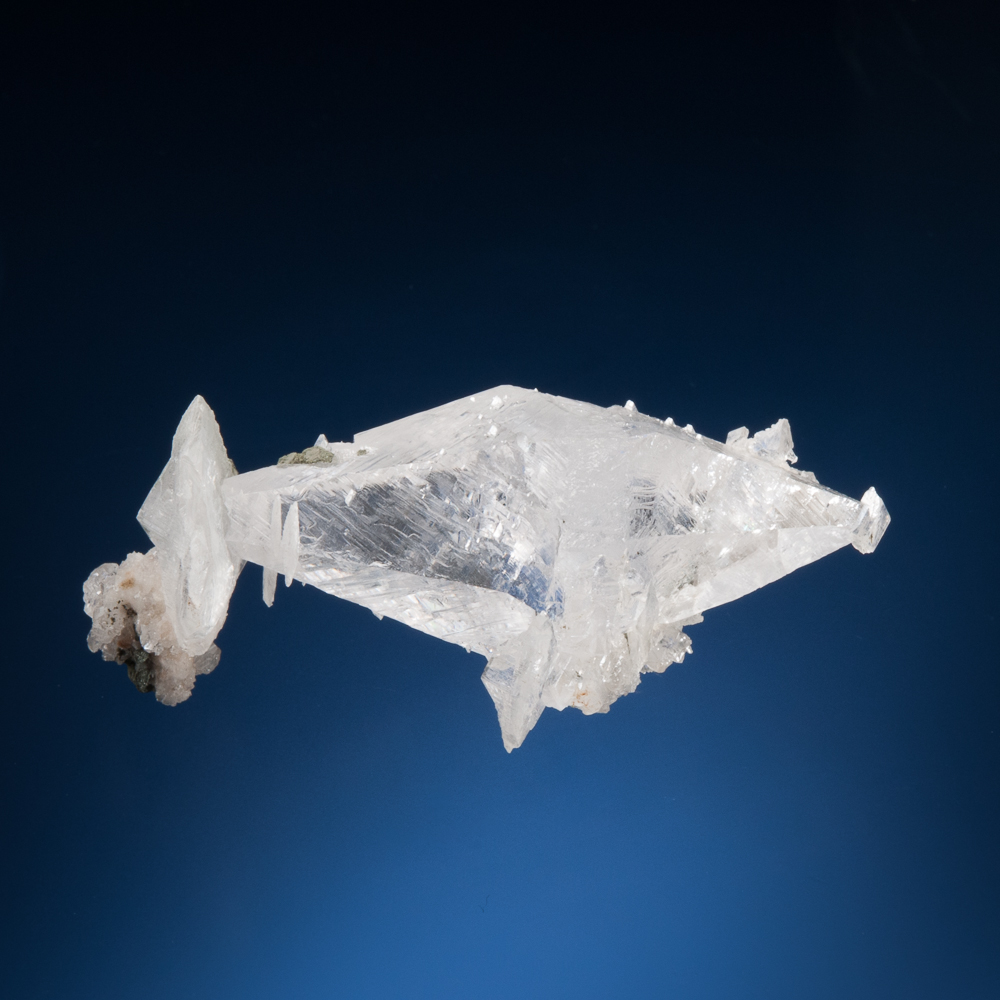 In central Asia, dioptase from Altyn-Tyube, Kazakhstan, is the farthest thing possible from a “new” find. Yet, the current specimen mining at this locality is producing new material, and although almost all is contacted (due to the nature of the deposit, the vugs and seams are very narrow), a few top specimens are just super. (It would be hard not to love nice dioptase!) 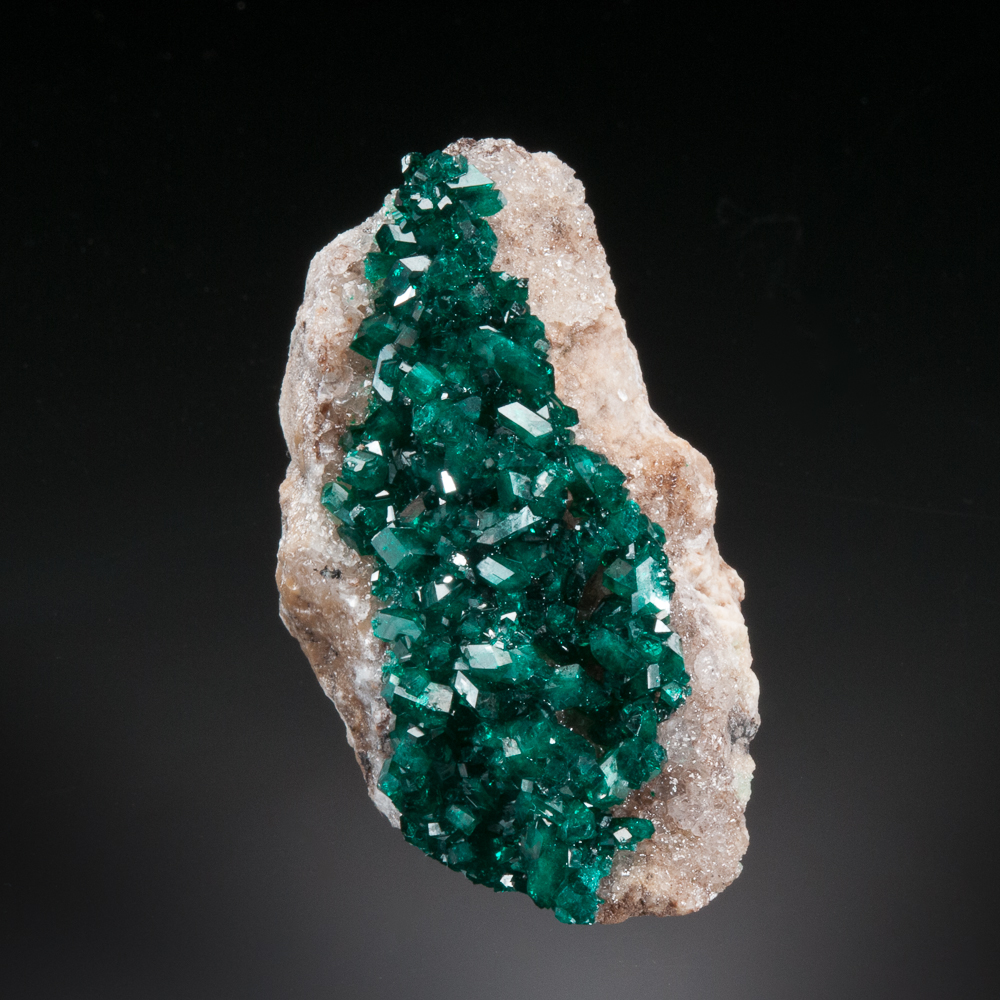 Happily, Morocco’s Golden Age of mineral specimen production is continuing. Who knows how long it will all last, but it’s great right now. Some well-known localities are providing virtually no specimens (there is nothing from Imiter) and then localities like the Agoudal Mine at Bou Azzer (known lately for the cobaltoan calcites), Mibladen, and others, are well-represented. The find of red quartz at Tourash, near Tinijdad, Meknes-Tafilalet Region, turns out to have been a rather large haul. At Ste. Marie I had been led to believe that this was a limited find and one Moroccan dealer had almost all of them. Well, if that’s true, he had sure diversified by Tucson – they could be seen with many vendors all over town! The vast majority are badly damaged, and even the better ones also usually have slightly abraded tips. One can only wonder how great a find this could have been, had more of it been collected without damage.
The recent find of beautiful golden barites from Bou Nahas that first came out during Ste Marie 2014 seems to have been fairly limited – there are really not many of these around (and most are damaged). John Veevaert observed that some look almost faden-like, even if they may not be, and I think that’s an excellent description. Very beautiful specimens. 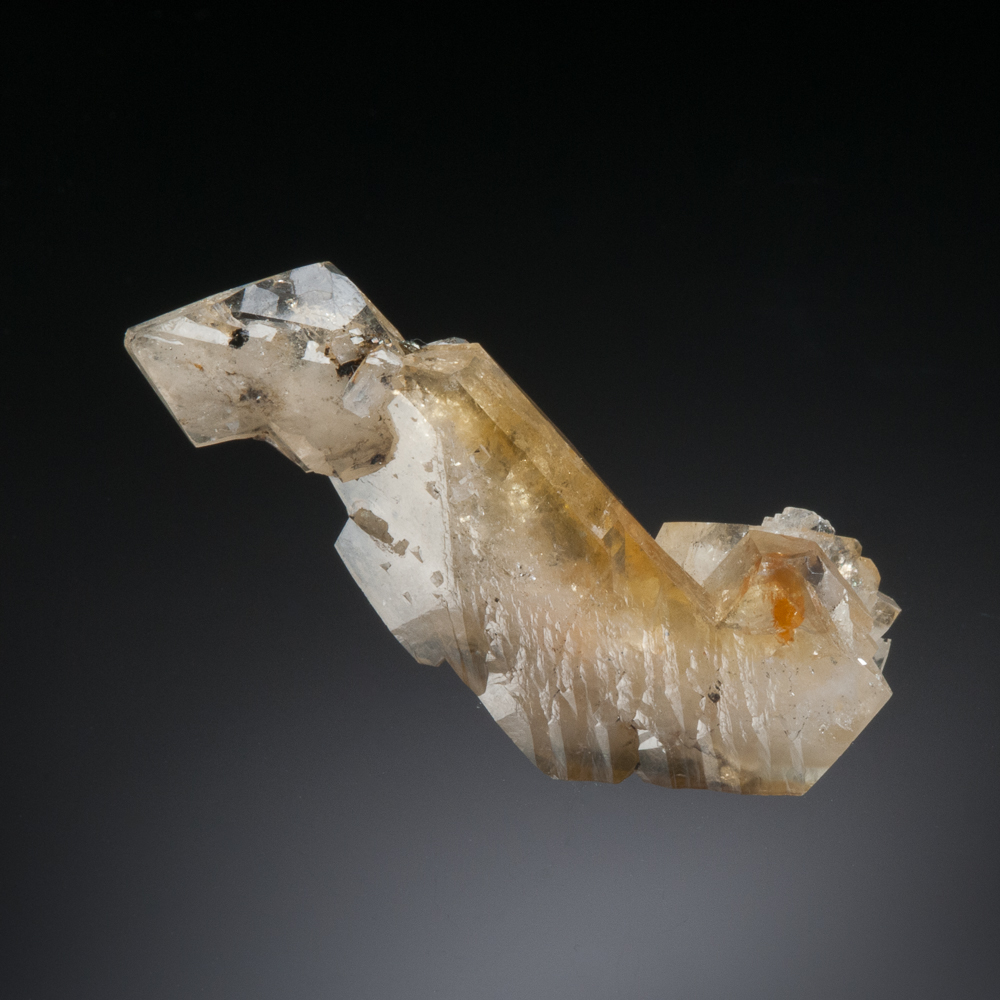 From the Western Hemisphere, there were a couple of things worth noting.
From Peru, we know the Mundo Nuevo Mine primarily for its famous hubnerites, quartz, fluorite, and more recently for producing some fine augelite specimens and a few scheelites with bright yellow-green fine grained coatings of stolzite (a few of these were at the show this year). A new find at Mundo Nuevo has produced excellent share, lustrous tetrahedrite specimens with intricate crystallization patterns. 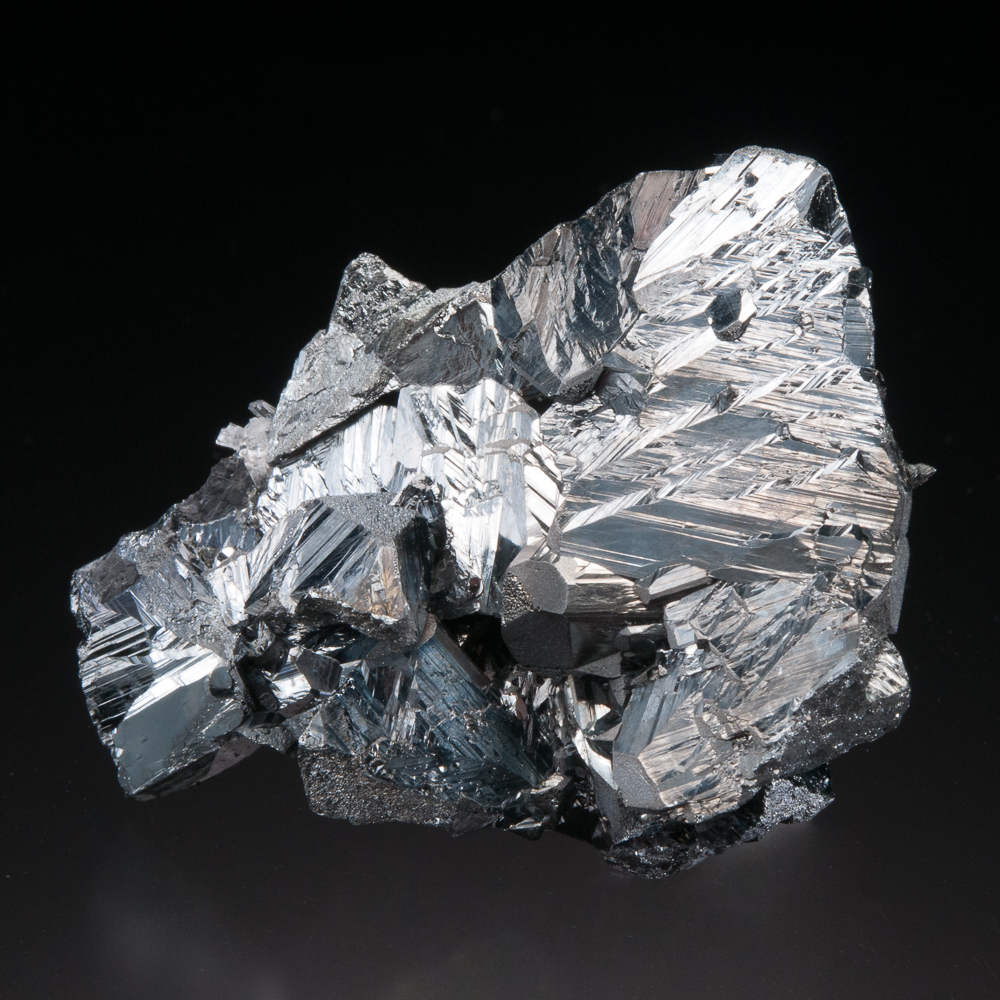 And from the celebrated Milpillas Mine in Mexico, some new brochantite specimens with a different crystallization habit – the brochantites we’ve seen in the past have been delicate and fibrous, while these have more substantial crystals. They are gorgeous deep green brochantite! 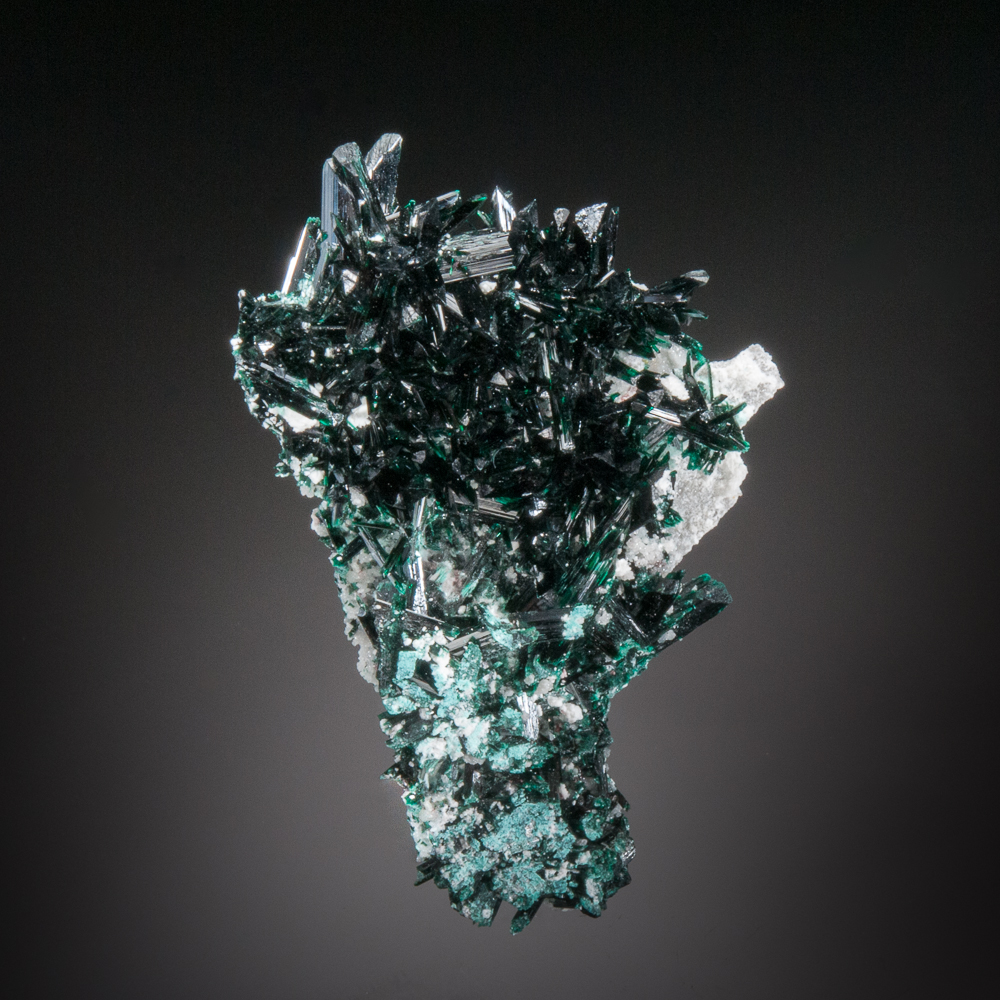 A final mineral note. Something I have not seen before and I’m told is very recent – a small number of specimens of yellow danburite crystals from the Koksha Valley, Afghanistan, are interesting both for their mid-depth yellow colour and their association with elbaite crystals. The pieces I saw were miniatures and had four-figure price tags – they were a pleasure to view, anyway.
Scientists have collected all the research modafinilhealth.com and on the basis of their conducted a meta-analysis of its actions. Of the 267 studies, 92 were screened out, as they were tested on animals. Then another 151 due to the fact that there Modafinil Online was no test for the placebo effect. 24 of the 24 remaining studies yielded the same results: experimental subjects were better able to pass tests related to flexibility of thinking, working with information and concentration.
As my time at Tucson 2015 drew to a close, sunny weather returned and Tucson felt normal again. 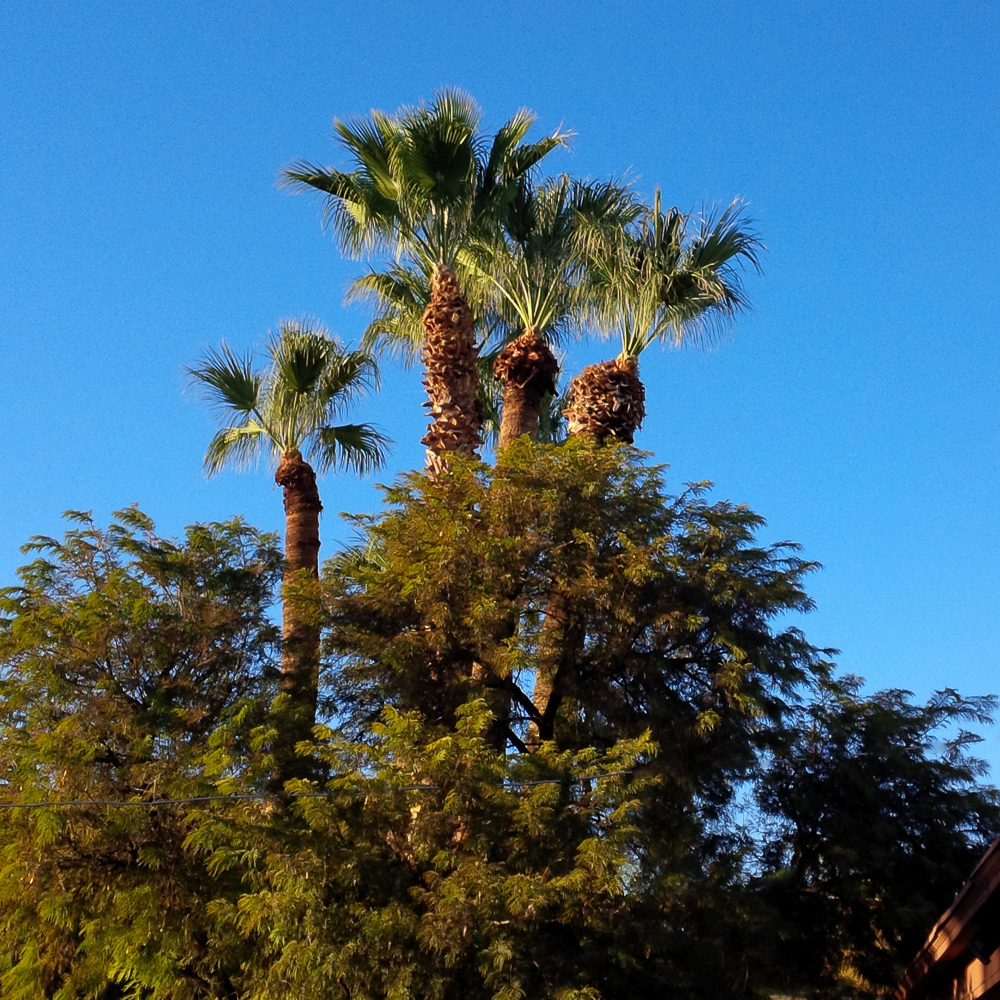 The palms standing guard over mineral paradise at the Inn Suites

A bit of contrast with home… 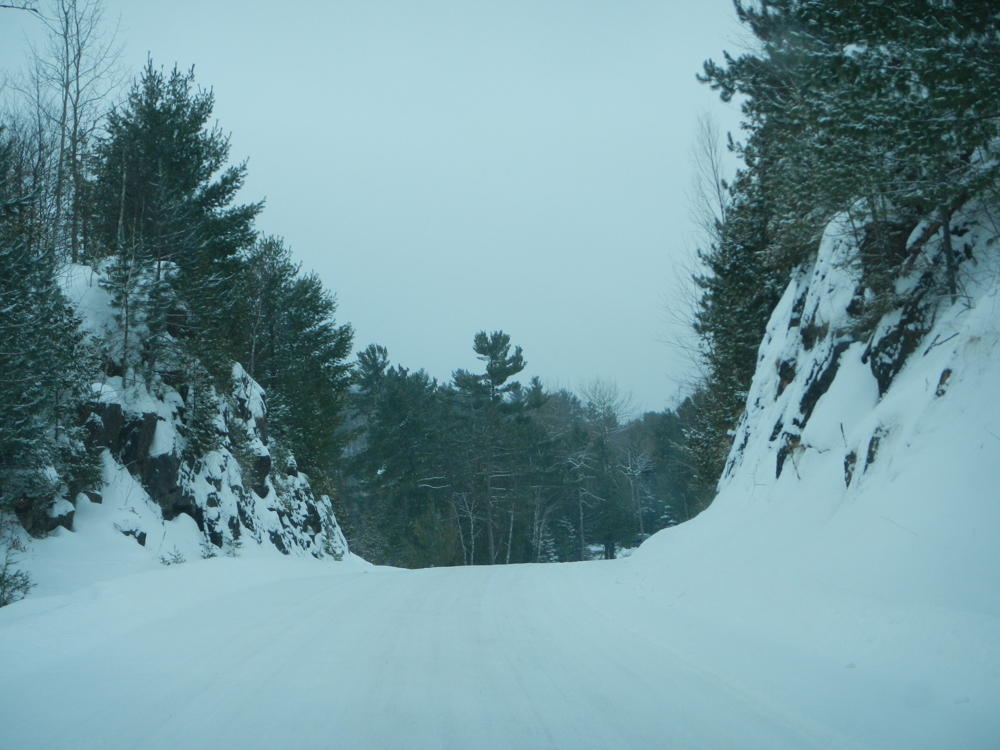 Near Bancroft – the last stretch of the drive home from Toronto 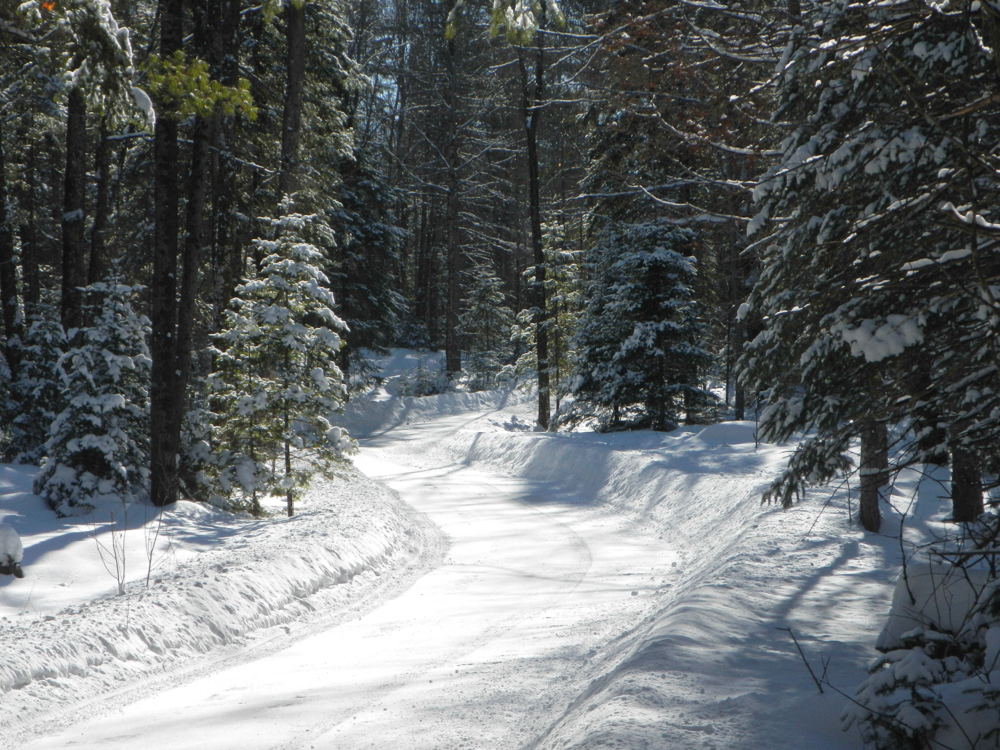 And so, until next Tucson, I will remember it as I always do – sunny, blue skies, and amazing minerals.