Always hard to contain my enthusiasm about Tucson… The world’s largest annual gathering of mineral people and mineral specimens from around the globe never disappoints – it is a great time full of great minerals. 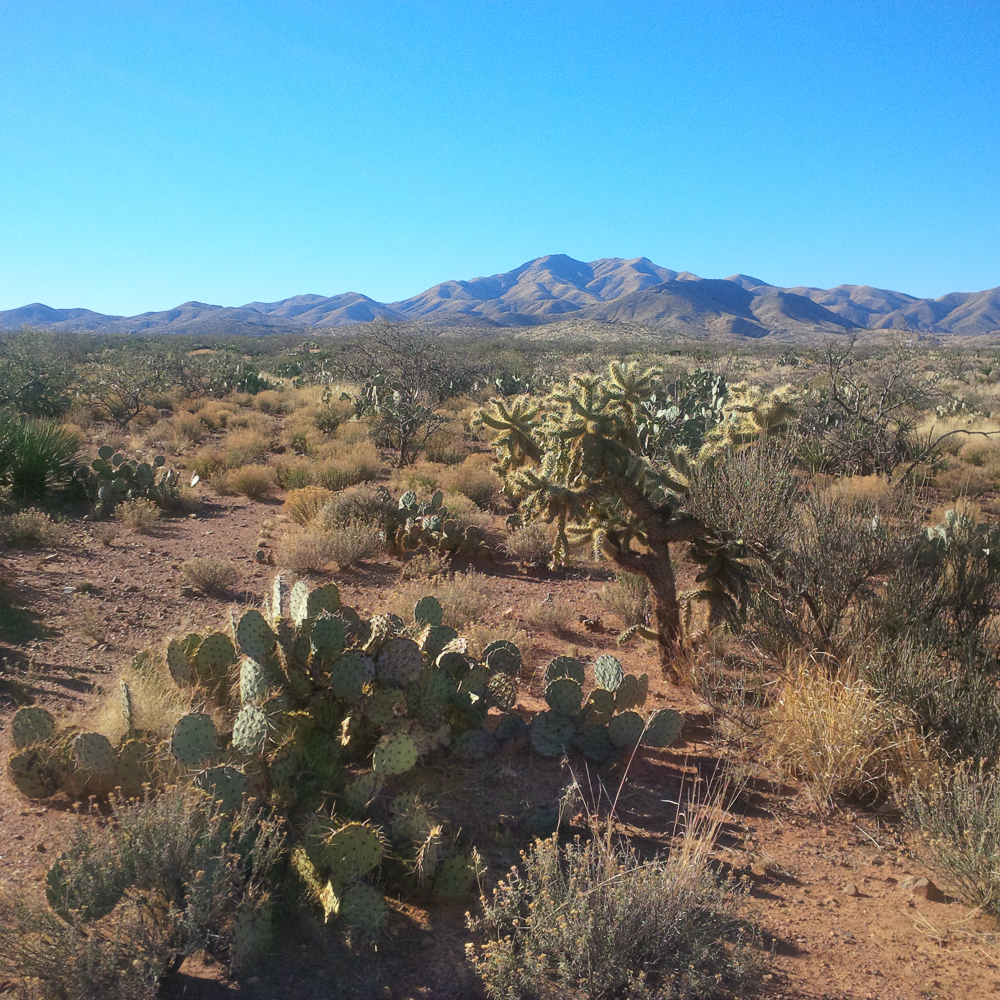 The foothills of the Santa Rita Mountains, just south of Tucson.

OK, I admit it’s also a sunny and warm break from Canadian winter. While many others in North America seem to be having a bit lighter winter than usual, we’ve had lots of snow this year in the Bancroft area. It began in November and now the snow is high. A February 2017 snowbank by our house: 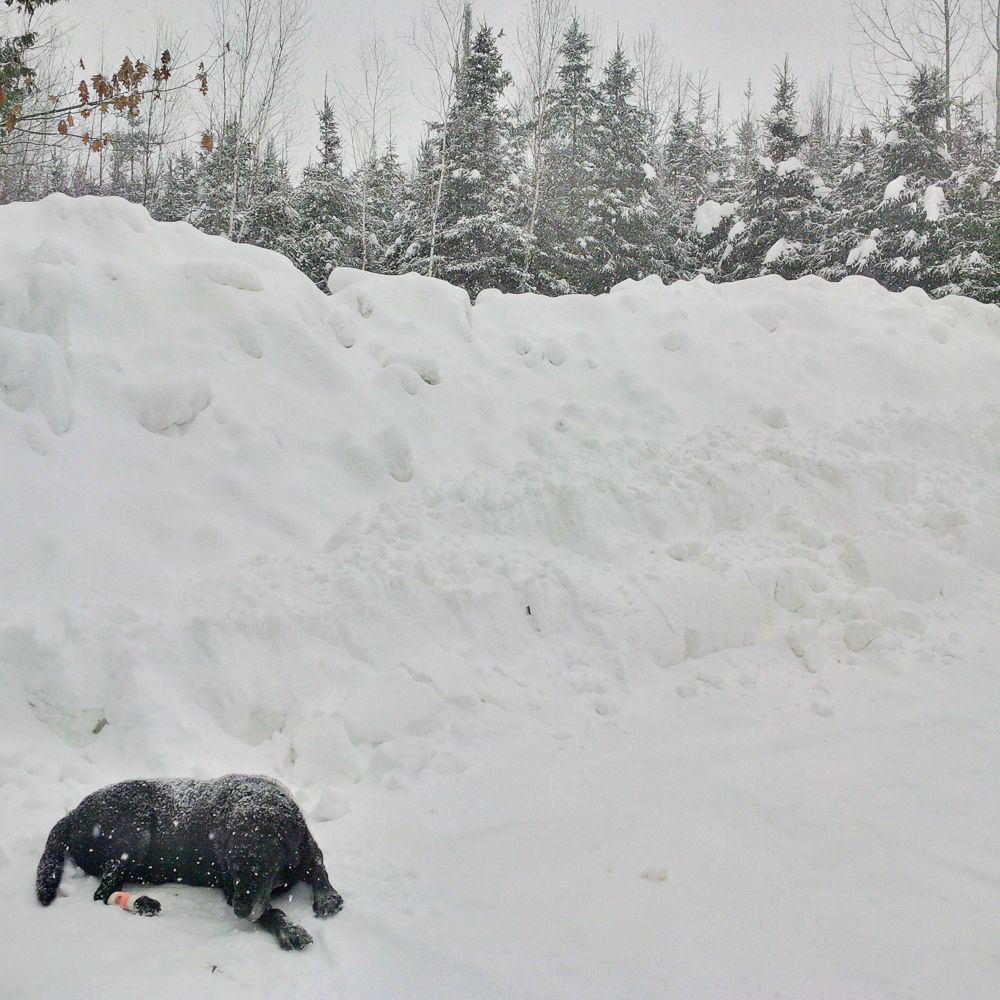 Tucson’s surroundings are obviously a real contrast to home, both as to weather and scenery. 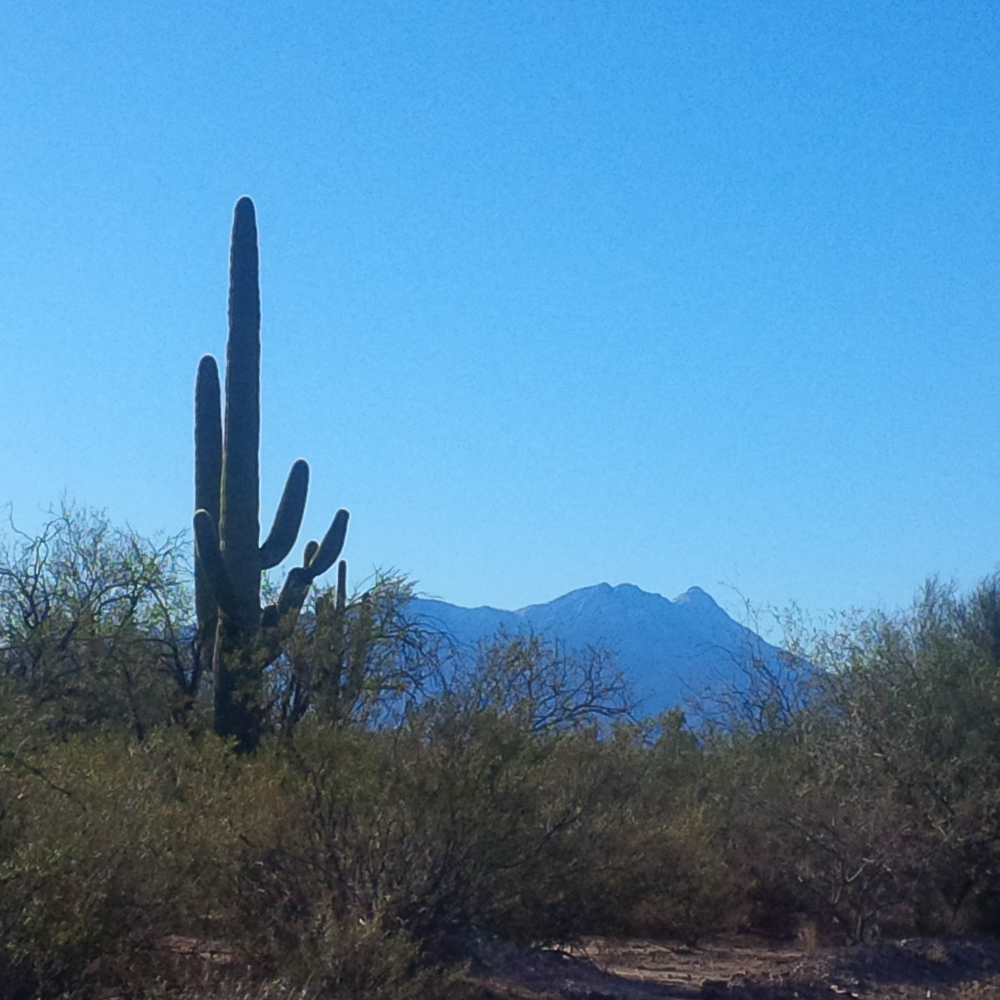 Santa Rita Mountains and a saguaro.

During the show, there is so much to see and do with the minerals and mineral friends that, in the limited time of a Tucson trip, there is precious little chance for exploring the surroundings. However, every step out in the area is worth it! 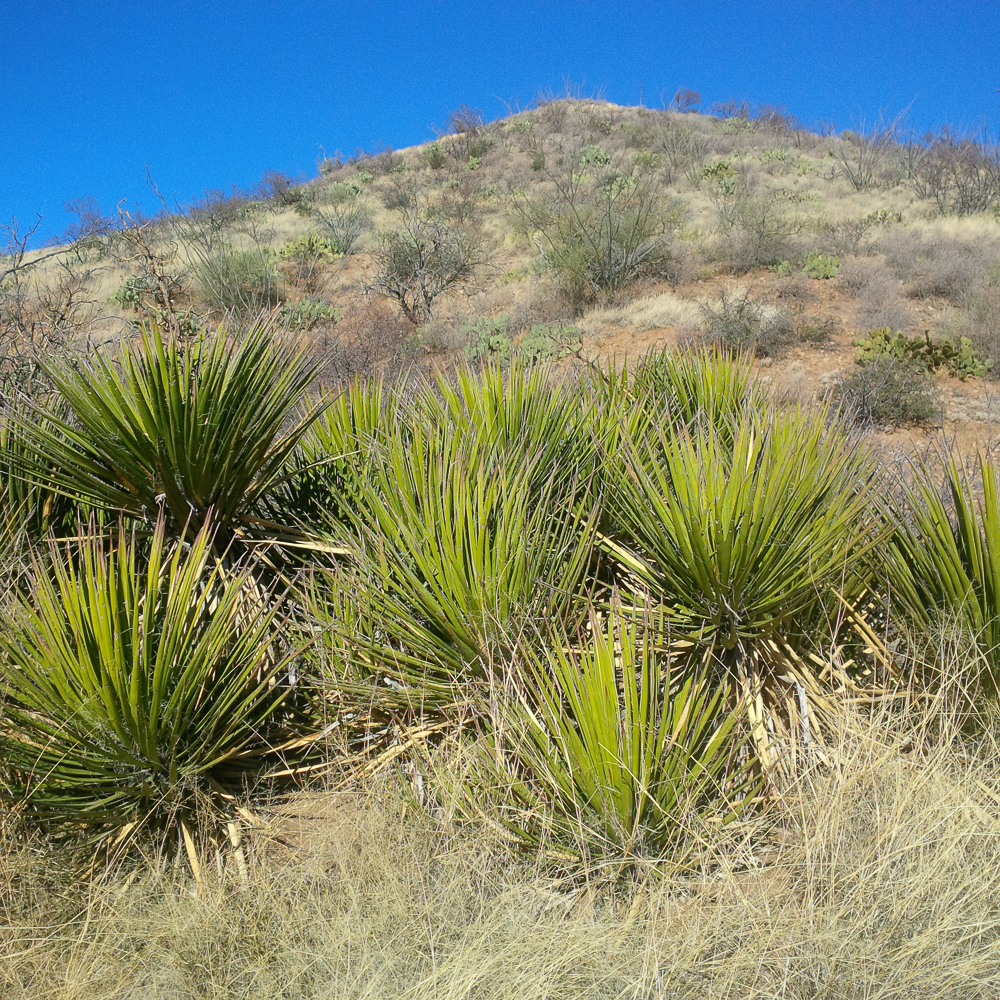 A walk in the foothills

As every year, the mineral events around Tucson are spread over many different show venues, over a few weeks. From one year to the next, dealers come and go, and move about. New shows pop up, older shows wane and sometimes disappear altogether, and then some rise again from the ashes. So, always something new and interesting to discover out there in the urban field-collecting jungle.
I thought maybe I’d start with my favourite warnings and signs from around the shows.
I didn’t take a photo of the one in my rental car, but it was a winner: every time I turned on the car,  a bright, bold electronic notice told me not to operate the car stereo while the car is operating, because it’s dangerous. (Thanks so much to the Mensa-candidate lawyer who came up with that one.)
At one show: 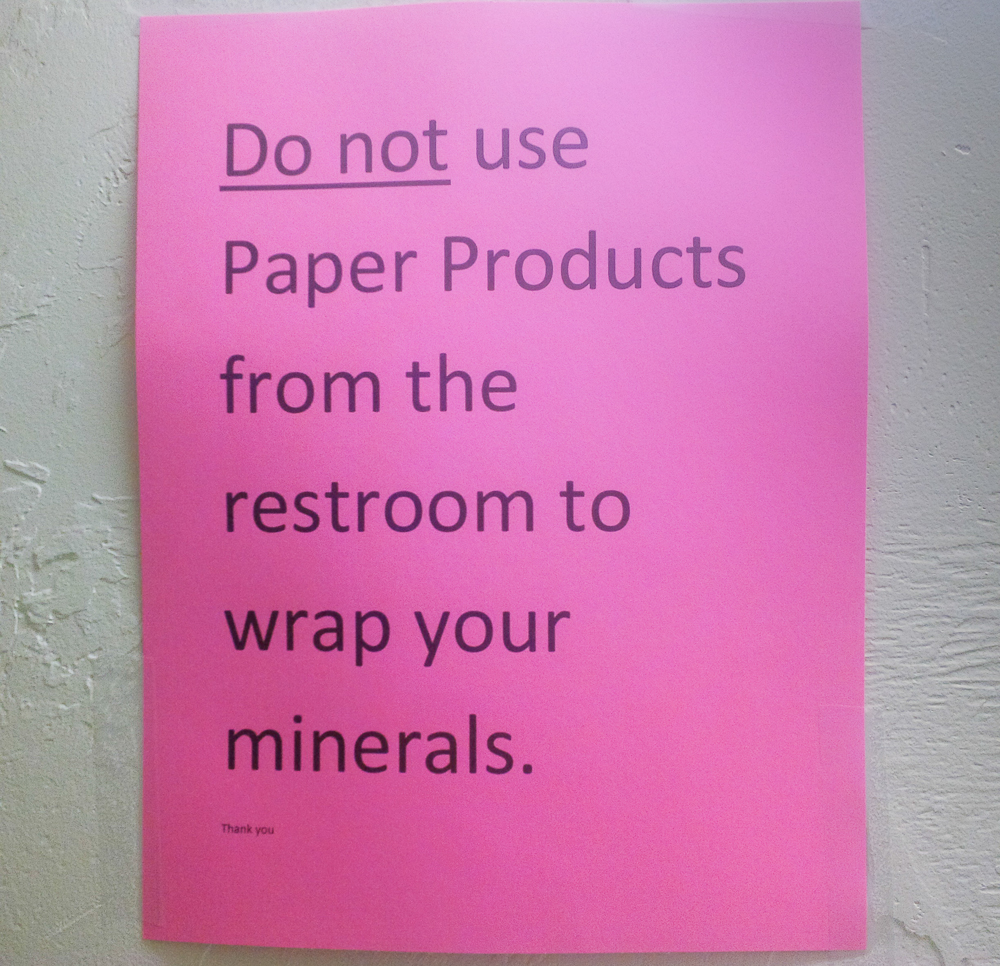 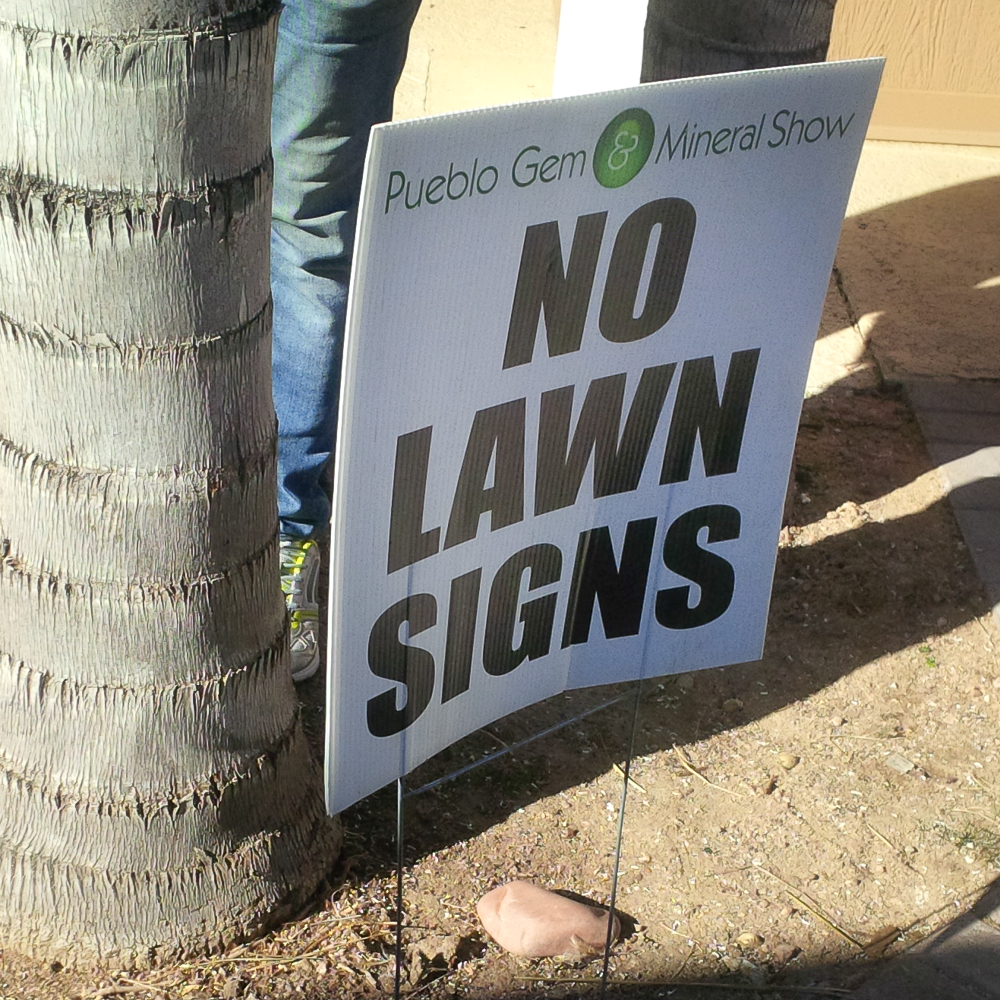 And at that same show, within about 40 ft of the one above: 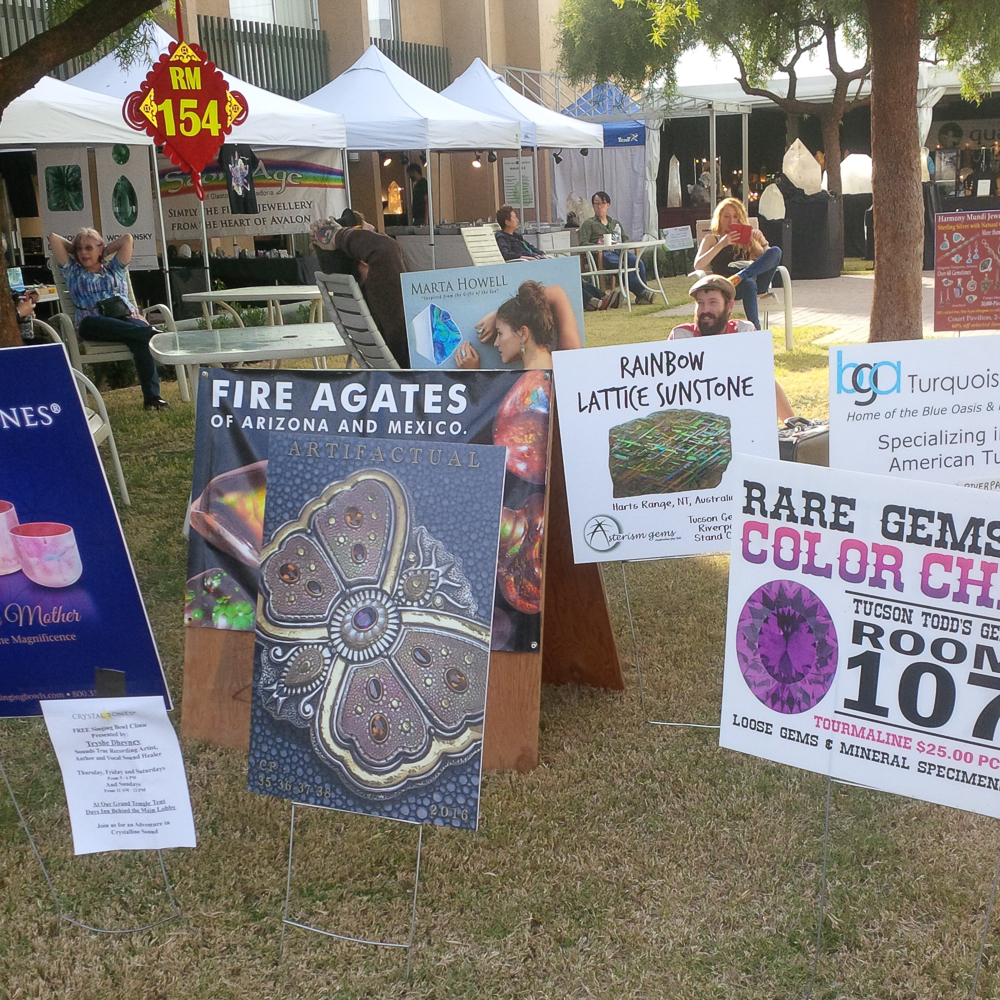 Anyway… On to the minerals!
On the whole, there were some excellent finds, mostly of the small and isolated variety (rather than large-scale splashes of new discoveries). I’m going to start with Brazil, because over the past year, it has produced many fine specimens.
A small number of new wodginite crystals have been found. These are sharp and great for the species! 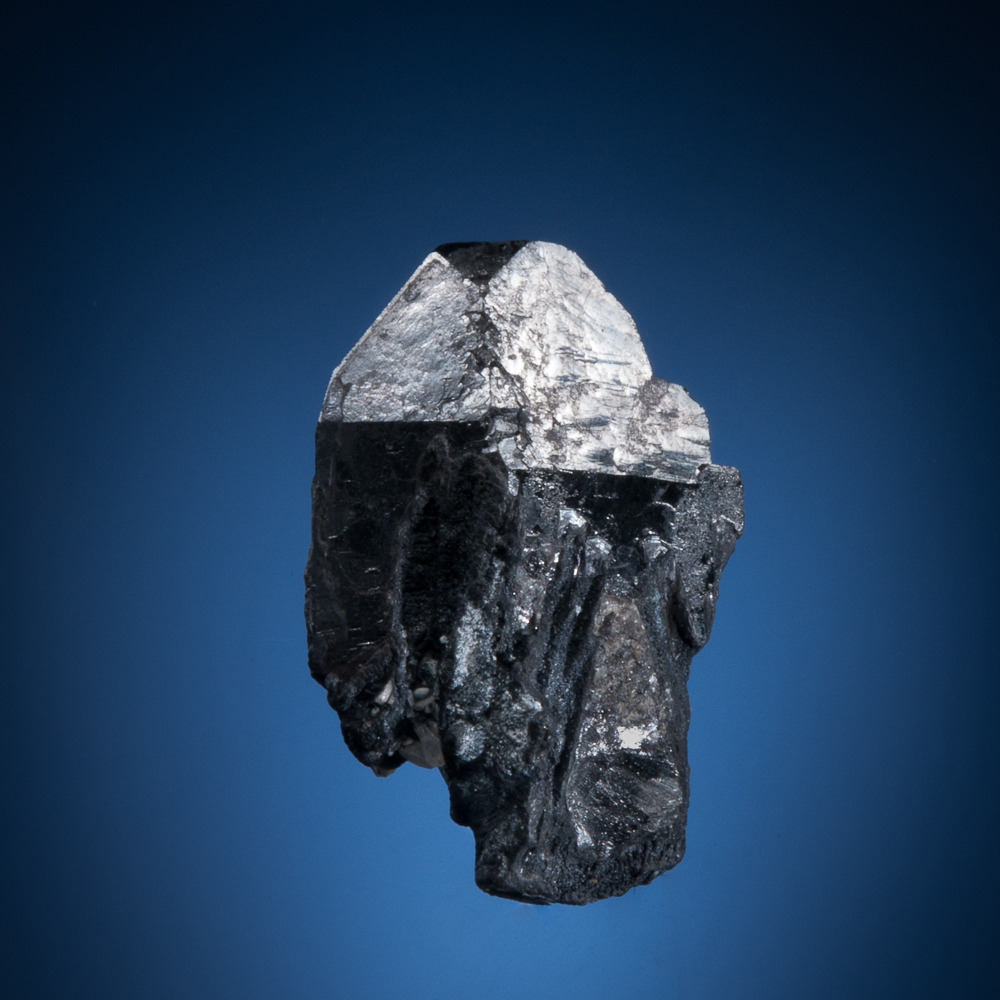 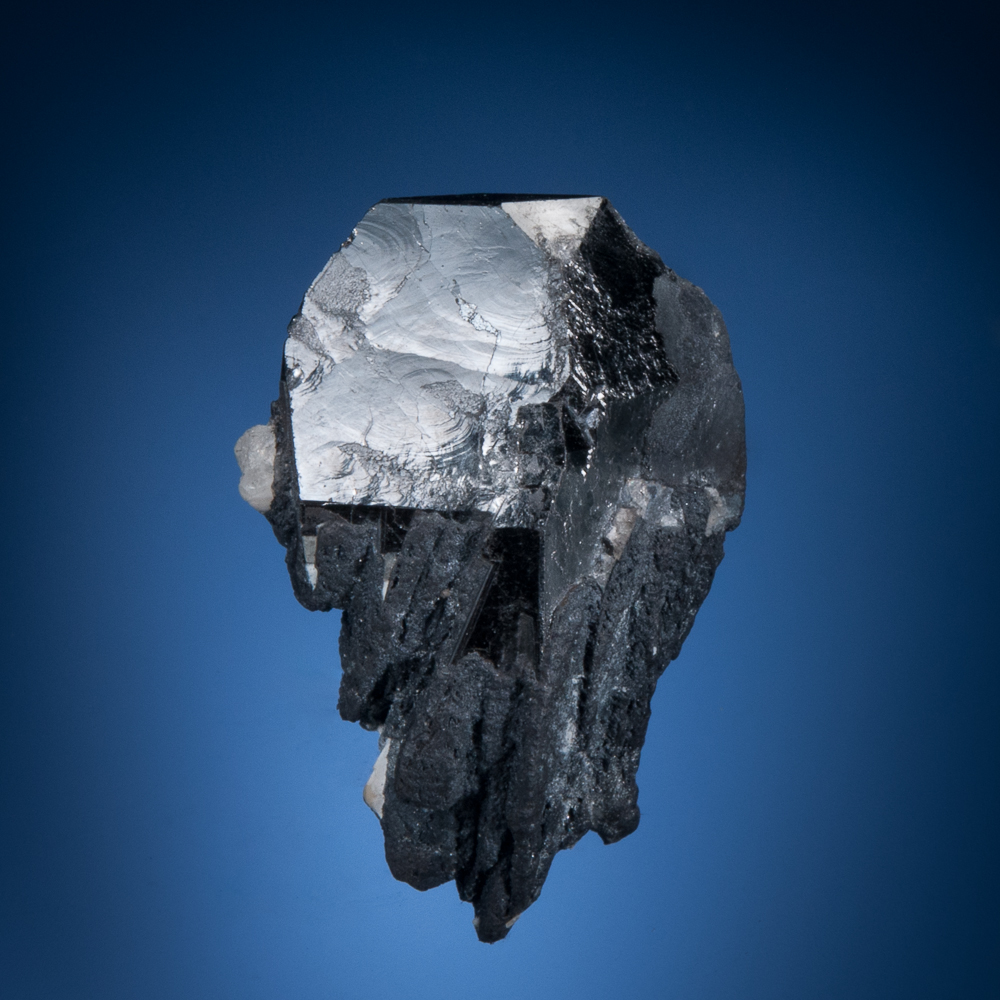 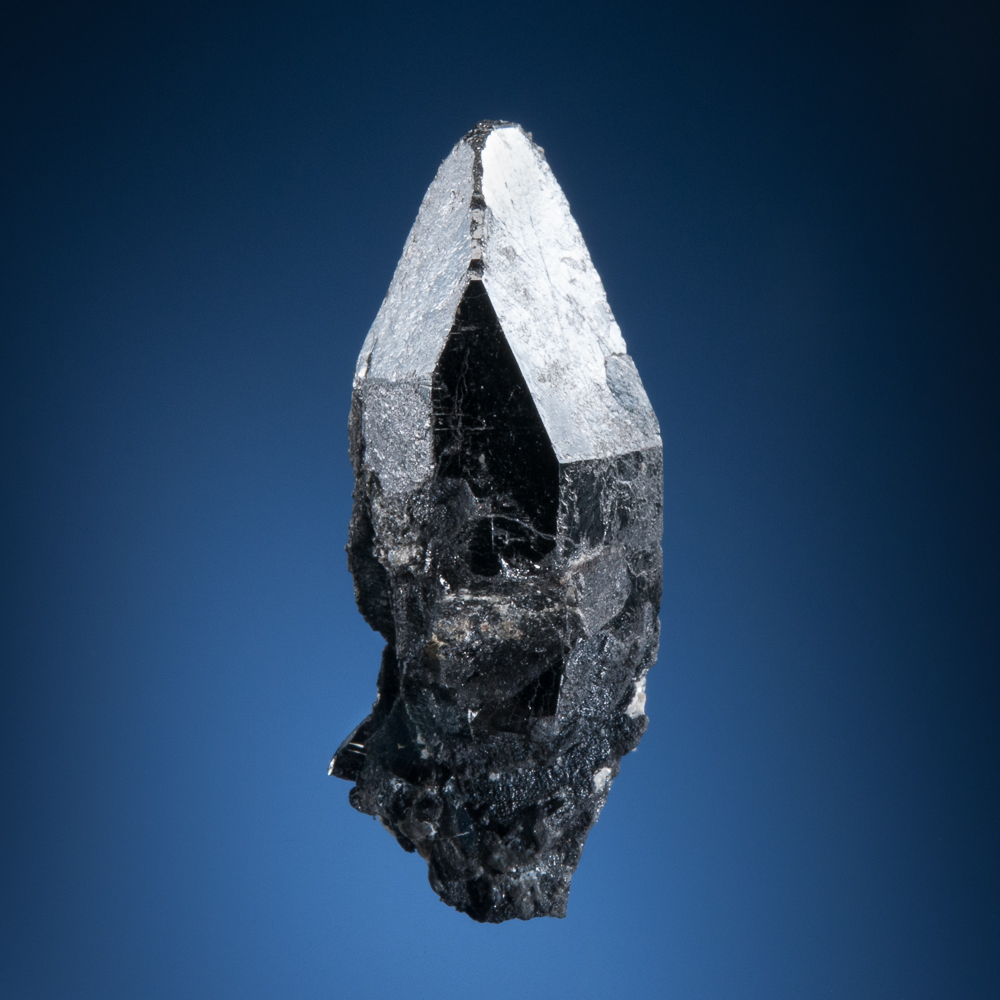 If you’d like to see more of these, I’ve posted them in the Wodginite Update (click here).

The workings at Novo Horizonte have produced more excellent hematite-rutile specimens. Most of these are not in very good condition, but a few are really super. 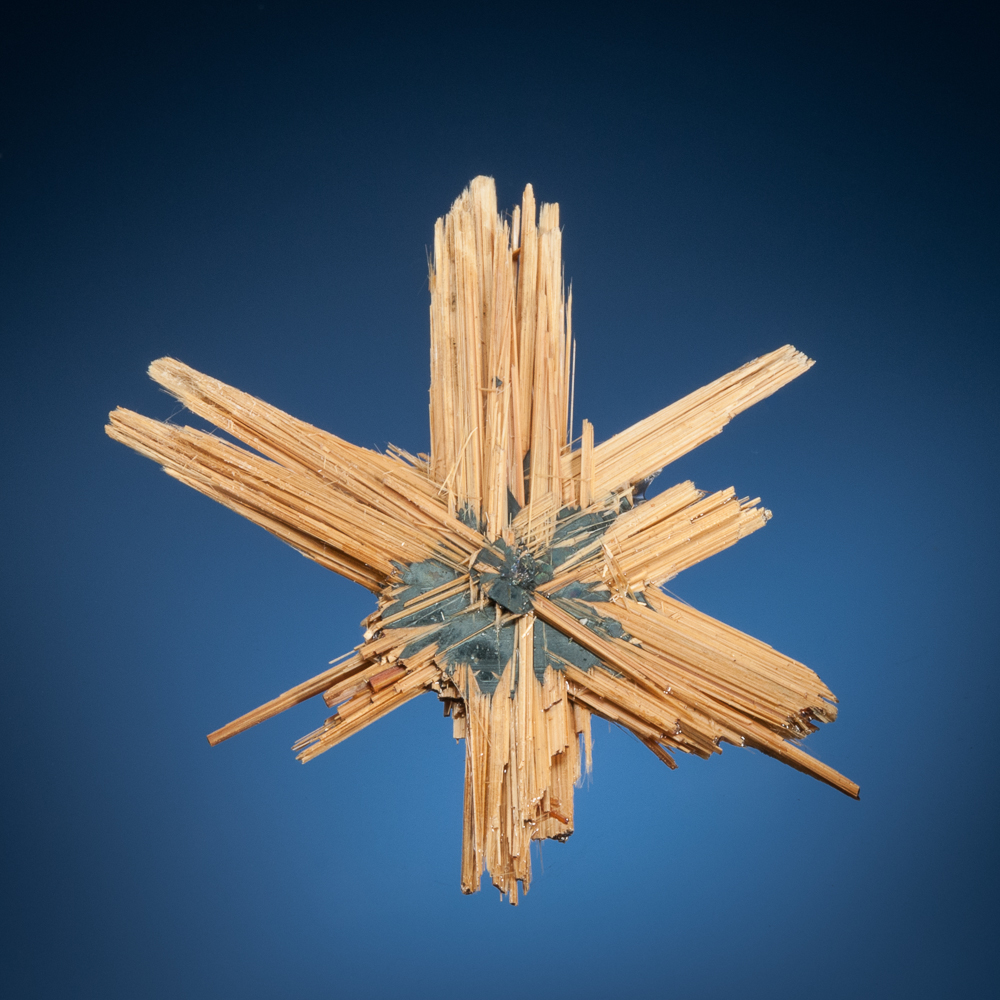 Novo Horizonte has also been the subject of some additional mineral analysis, with very interesting results over the past year. One of these is a new mineral, published in 2016. The work on this mineral began with our late friend, Luiz Menezes – one of the most observant and careful people in mineral world, who never missed something new, never assumed an identification, and whose work contributed to the description of several new minerals. The work on this material was continued by a group of mineralogists, and in June 2016, the new mineral, parisite-(La), was officially regognized by the IMA. (The full group: Luiz A.D. Menezes Filho, Mario L.S.C. Chaves, Nikita V. Chukanov, Daniel Atencio, Ricardo Scholz, Igor Pekov, Geraldo Magela da Costa, Shaunna M. Morrison, Marcelo Andrade, Erico Freitas, Robert T. Downs and Dmitriy I. Belakovskiy.)
I am including a photograph of one of the best specimens – there are not many in existence. This one was available from Luisa at Luiz Menezes Minerals. 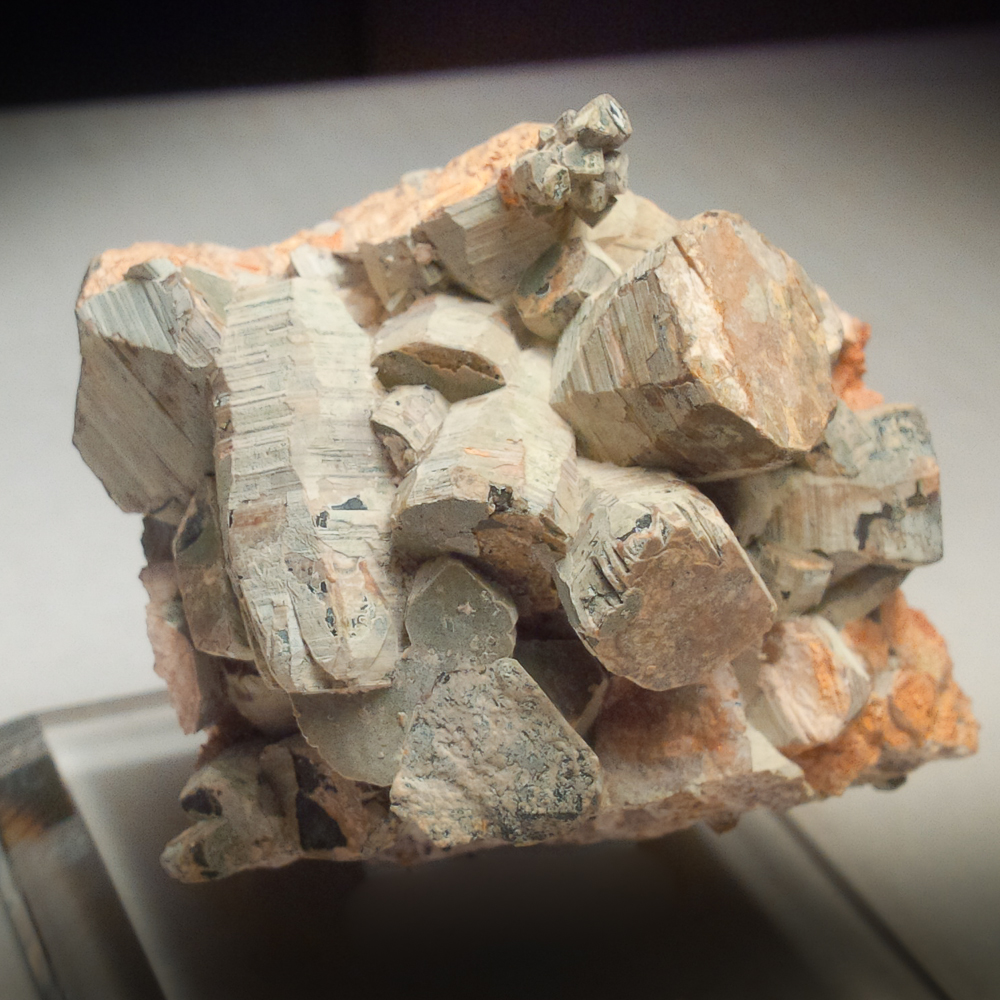 Just before leaving Novo Horizonte, I have a small final update. In November 2015, I had a few specimens from this locality on the website, sold to me under the label “synchysite”, and so-labeled on the website. Subsequent analysis by Don Doell has confirmed more about their identity. Having conducted semi-quantitative EDS at SGS Labs, Don found that these are in fact phosphate mineralization, and they are likely a combination of rhabdophane-(La), rhabdophane-(Ce), possibly including monazite-(Ce). They appear to be pseudomorphs after a REE carbonate, probably in the parisite group, given that this new parisite-(La) has been found at Novo Horizonte in crystals with a similar aspect and appearance, at a similar time. They could also be after bastnasite-(La), which has been described from the locality. For now, I’m labelling them rhabdophane, pseudomorph after parisite, with the proviso that the above is the technically closest identification information to date. Thanks very much to Don for this analysis! Very cool for rhabdophane. (If you’d like to see what these looked like, they are here.) Mine are all sold, but Carlos Menezes had a few thumbnail-sized specimens of this fascinating material available in Tucson.
Also from Brazil, there has been one I think will be underrated and missed by many collectors. From Mantena, Minas Gerais, there has been a find of beautiful muscovite crystals. Yes of course the mica group minerals are very common minerals, and one might be jaded and tempted to overlook them on that basis. However, it can be a challenge to acquire a genuinely good muscovite specimen. These muscovite crystals from Mantena have nice colour, giving depth and presence. I picked out the finest few I could find and they will be online in a coming update. 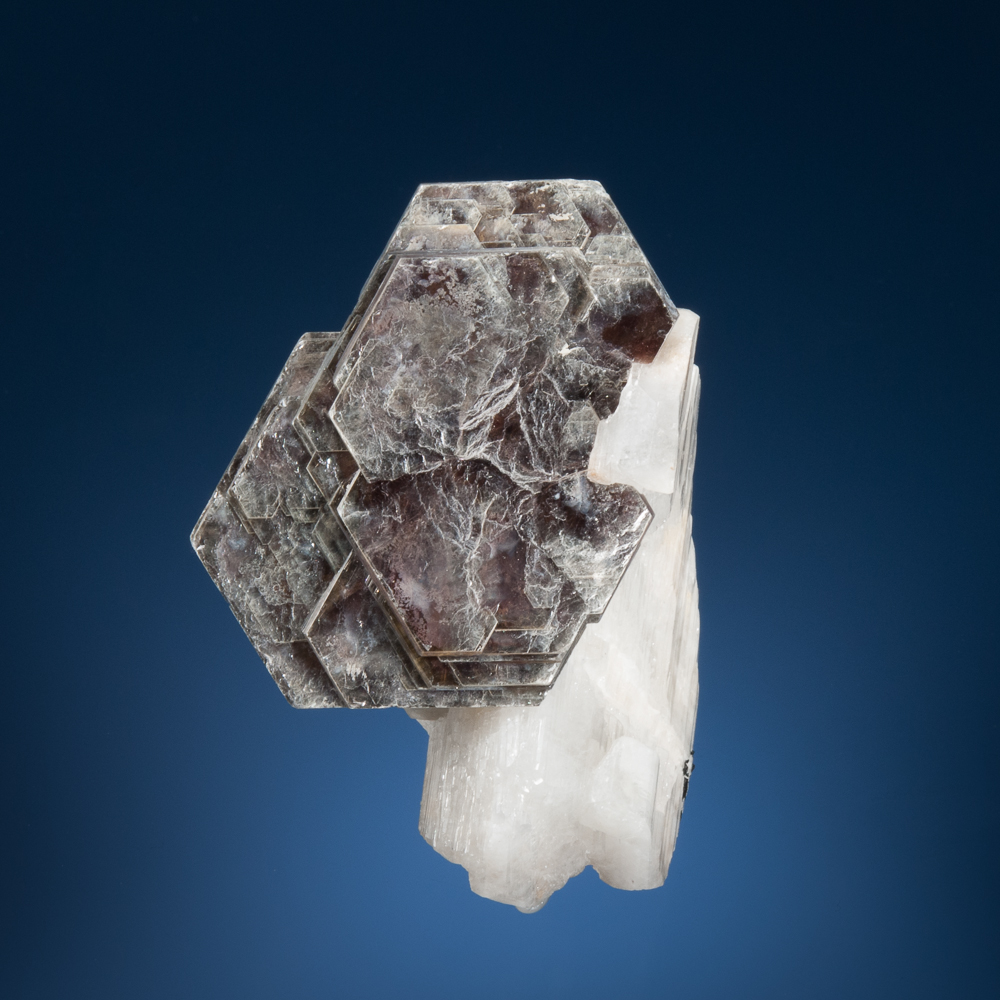 I have always loved the blue fluorapatites from Ipira, but, although I always look for them, I am almost always disappointed. This is not because there aren’t any – it’s because very few of them are sharp and collection-worthy. The deposits mostly contain corroded-looking crystals with poor definition, and most crystals are broken crystal segments. This past year, Daniel Foscarini Almeida conducted significant mining operations in a zone that contained small, sharp crystals. Almost all had small chipping, but I went through hundreds and these best ones are extremely good. The colour with backlighting is hard to believe. 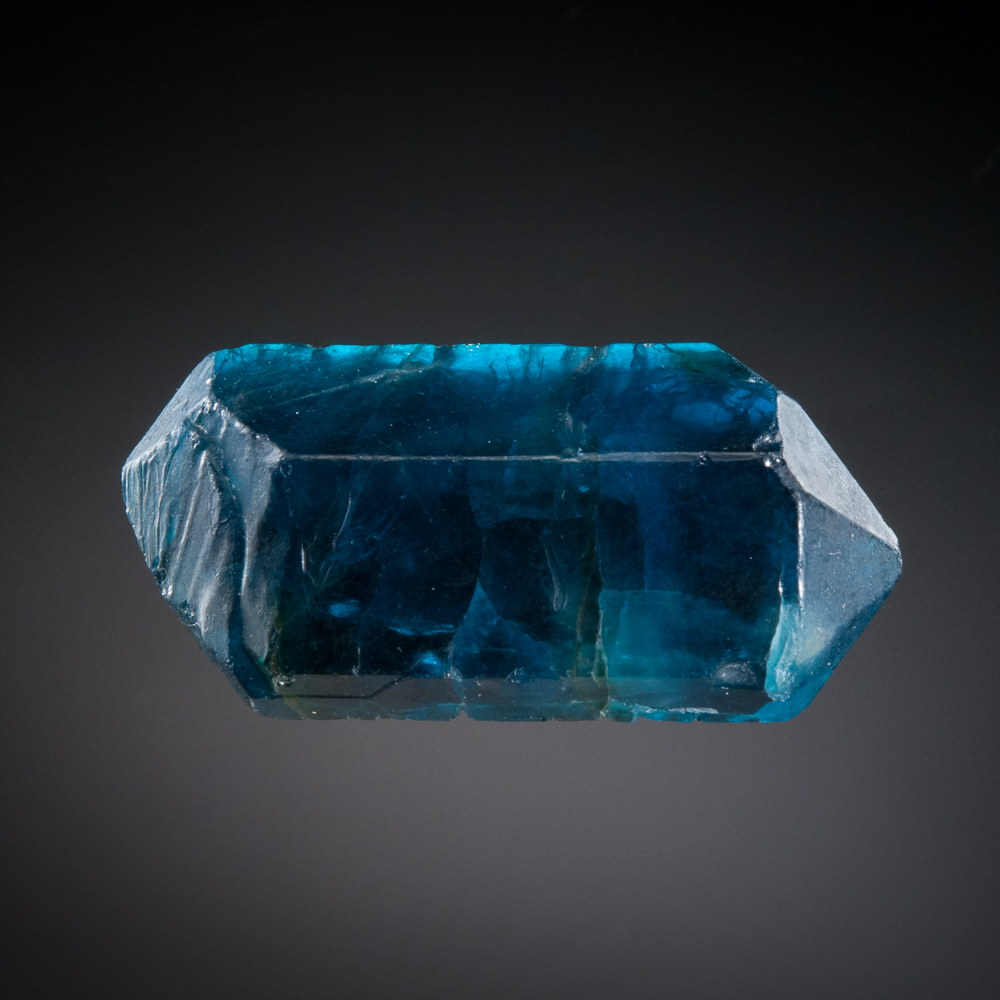 And finally from Brazil (for now), Minas Gerais yielded some very fine phantom quartz crystals this year, from the deposits at Presidente Kubitschek. As always with Brazilian quartz, it can be very hard to find specimens in excellent condition, but some of these are just great. 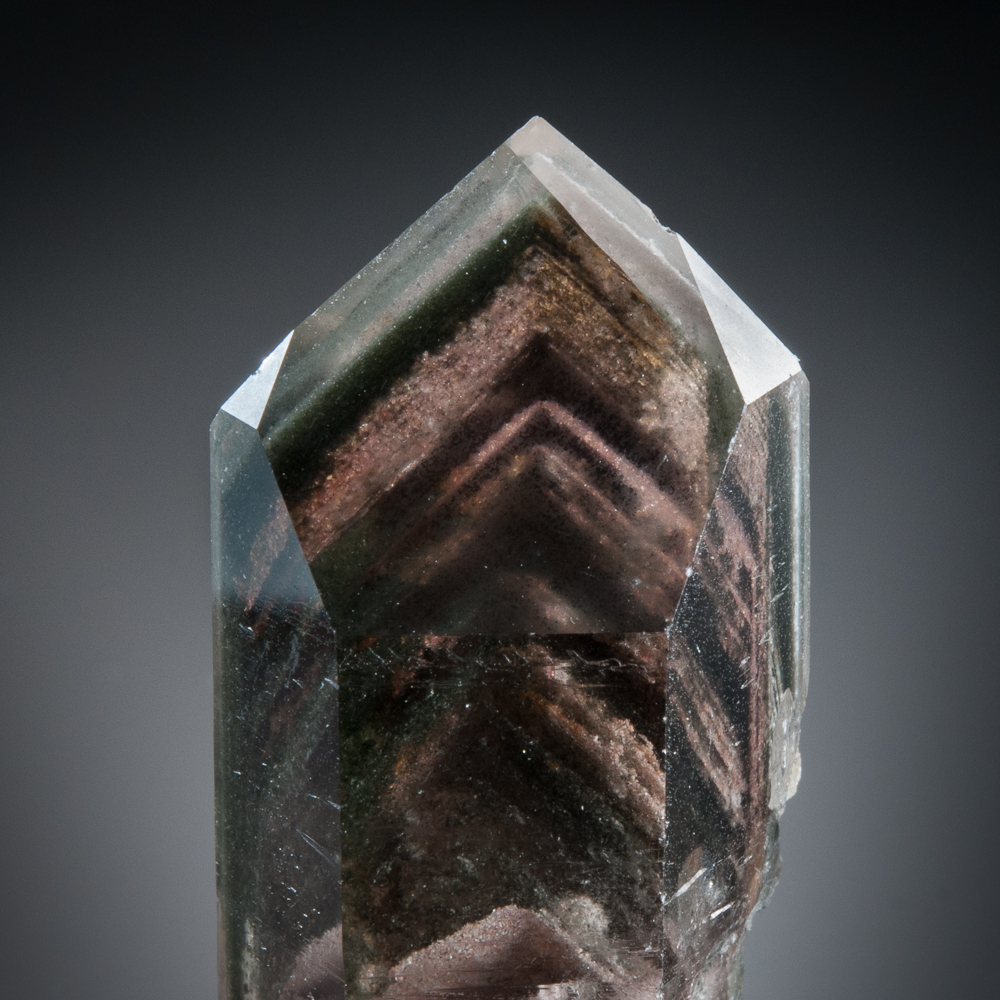 Moving on from Brazil to the African continent next, still on the quartz theme, there was a pocket of spectacular quartz with red phantoms from Orange River, Northern Cape Province, South Africa. Red quartz has been produced from this locality for many years, however, long-time South African dealer Clive Queit told me he has never seen any he liked as much as these, because these have such distinct red phantoms enclosed in sharp, clear quartz crystals – in his view they are the best. The crystals themselves are relatively small, and my favourite specimens were the ones that had good proportions (of crystal size to the piece), so the ones I consider the best are not large specimens. They are superb. 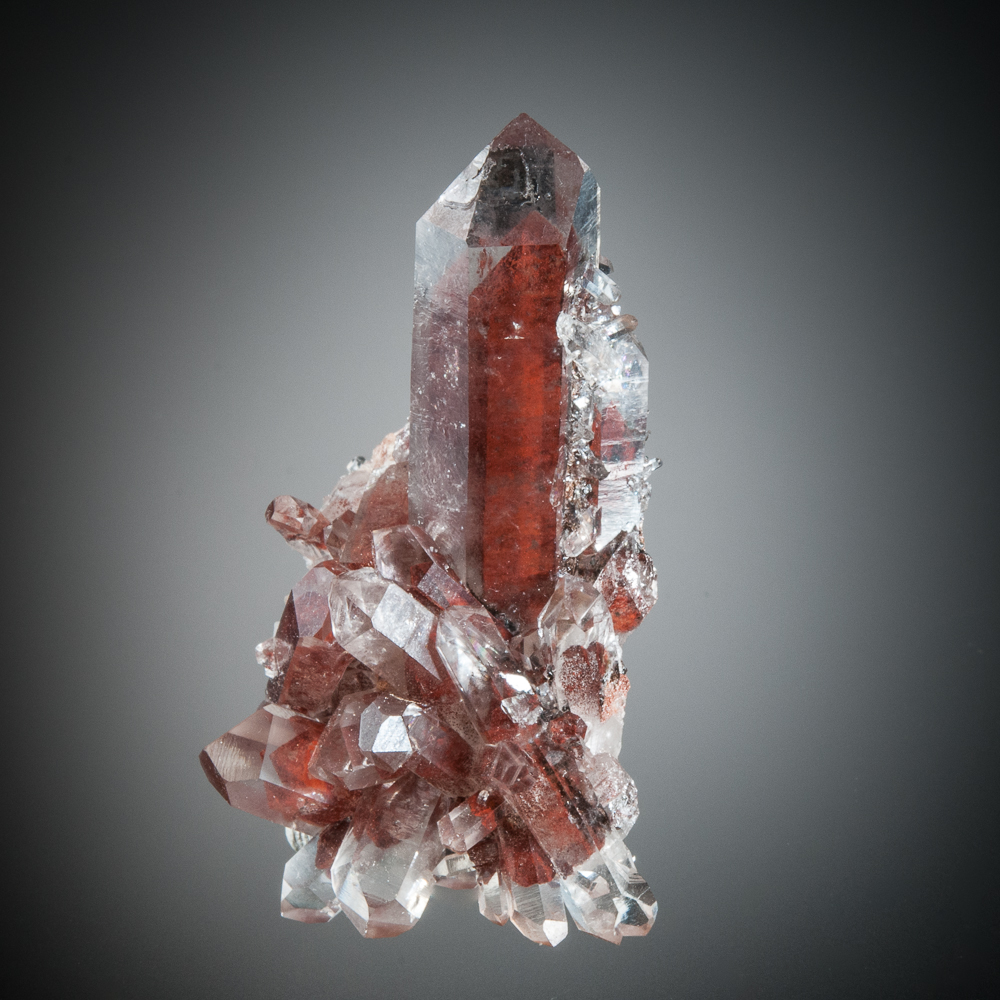 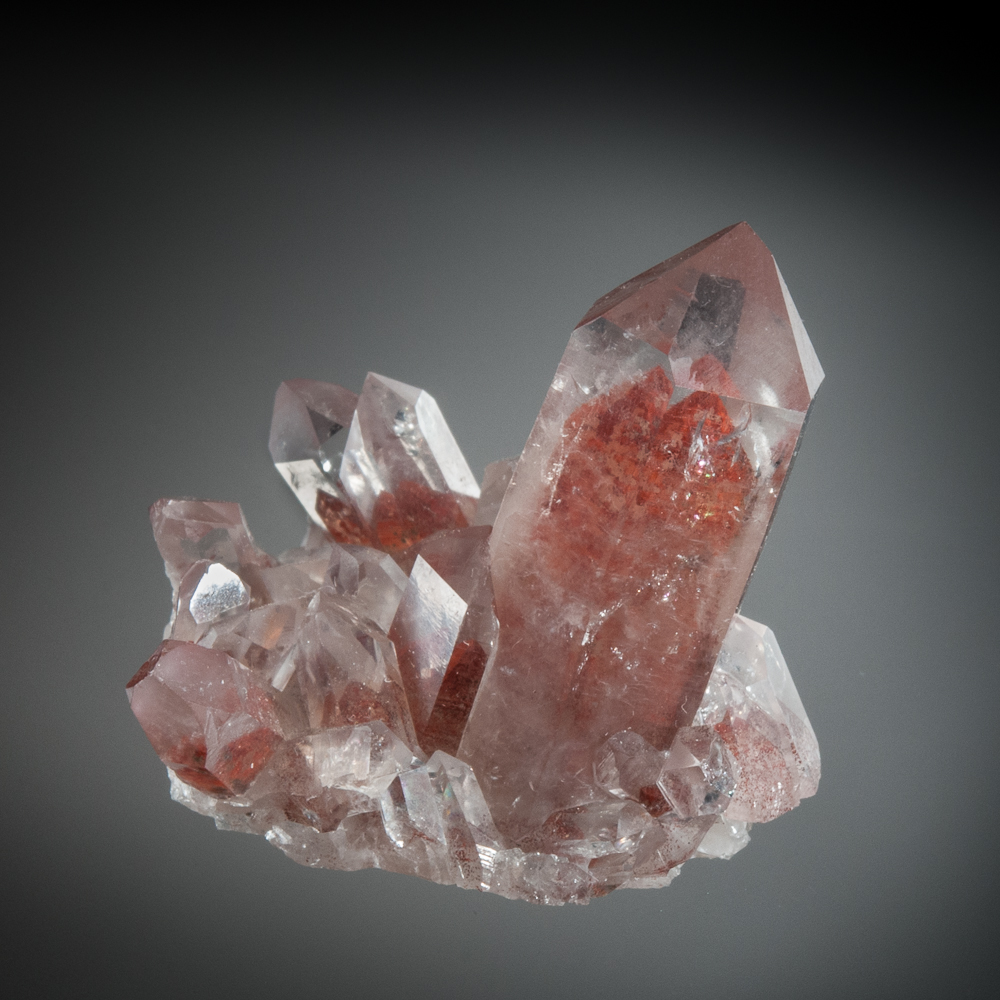 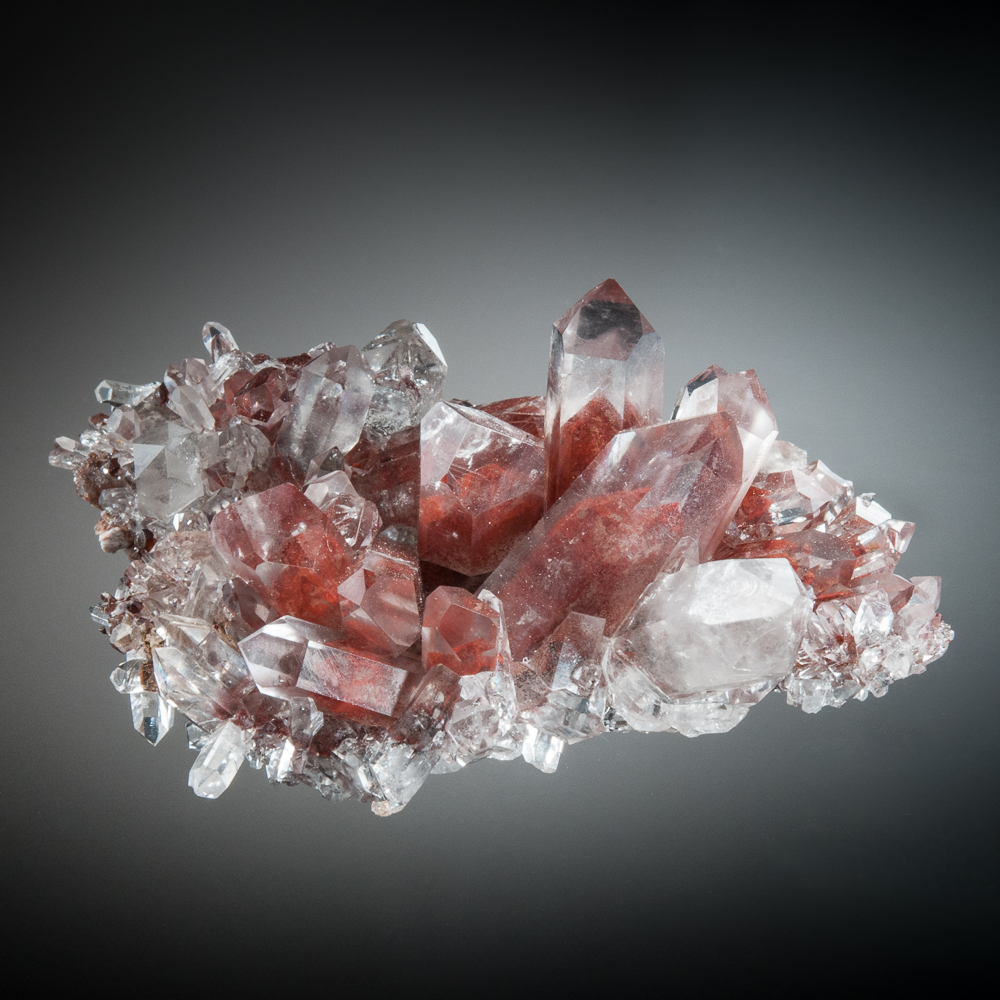 Further north in Africa, there’s something a bit different and new from Arrondissement Diako, in Mali. We’ve seen thousands of loose single garnet crystals from here over the years, and occasionally we’ve been lucky enough to see matrix specimens. A new find, at Diabe Sira, has produced some very attractive specimens with sharp, lustrous grossular crystals on matrix. As is the case with all localities, and particularly much of the Mali material (of the various minerals), so much is damaged – the devil is in finding fine, collection-quality specimens. I worked through a lot of this material and I found a few – they are really nice! 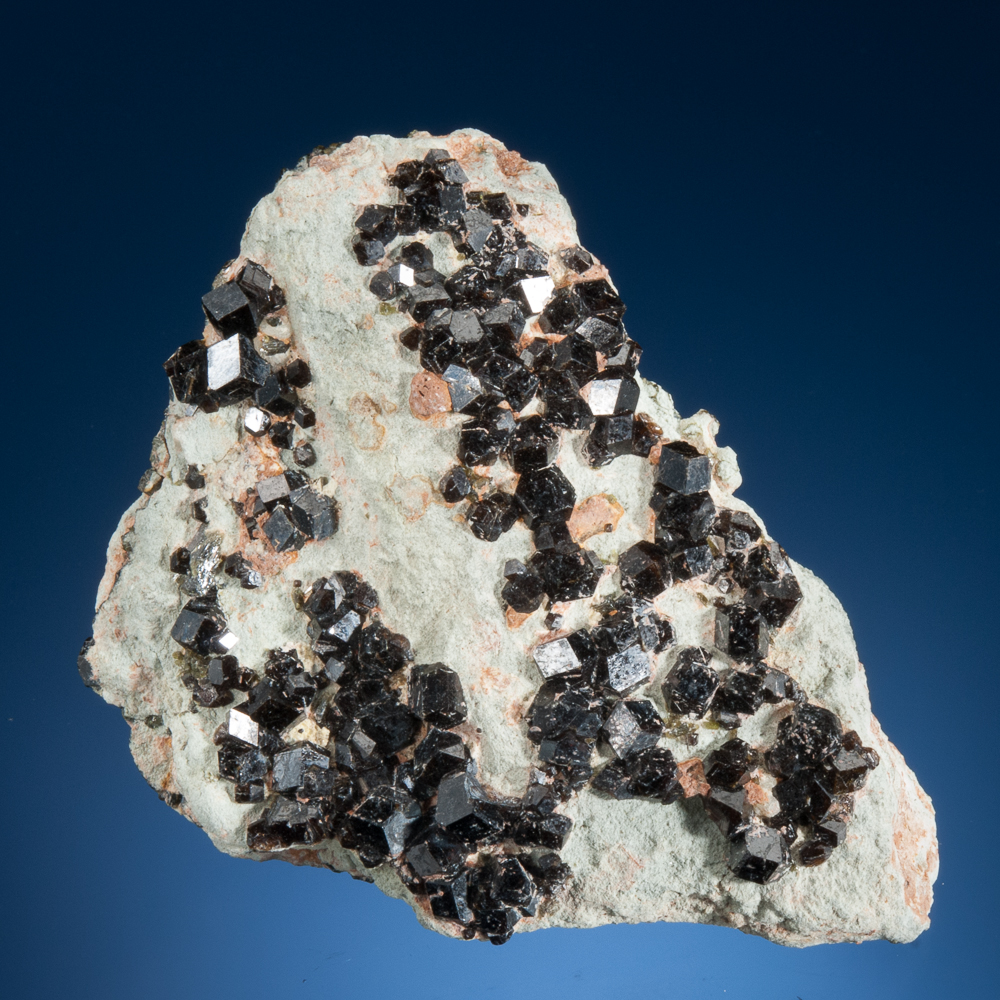 Further north still, I think we’ve all become a bit spoiled by the constant flow of excellent mineral specimens from Morocco in recent years. So it felt like a bit of a disappointment that there wasn’t a spectacular new find, and that some of the material we’ve seen in recent times is drying up. As I mentioned in my Ste. Marie post last summer, the Sidi Lahcen barites are no more – I love those specimens, and good ones are now already hard to find (and in some cases very expensive). Speaking of production that seems to have dried up, I was also surprised that there were hardly even any signs of the Mamsa aragonites (the ones posted here last fall).  I had expected to see some of the lesser material at very least.
However, from Morocco there were some beautiful erythrites from the Bou Azzer district. 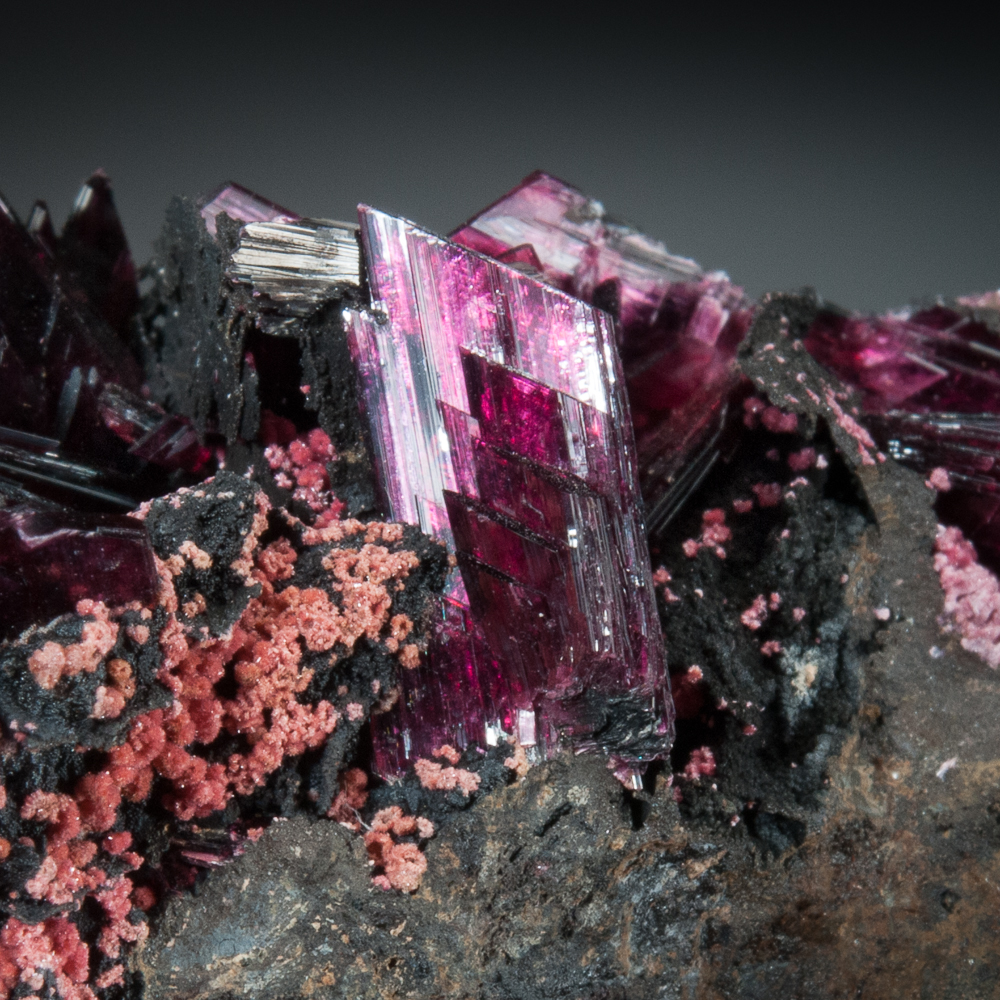 China seems to have produced less in the way of truly new material. There are some new bluish-purple quartz specimens, highly priced and different dealers were giving different locality names – we’ll see what the future holds for these. From Huanggang, there were a few of the flat, discoidal calcites that made their debut last fall in Denver – here is a sweet small one. 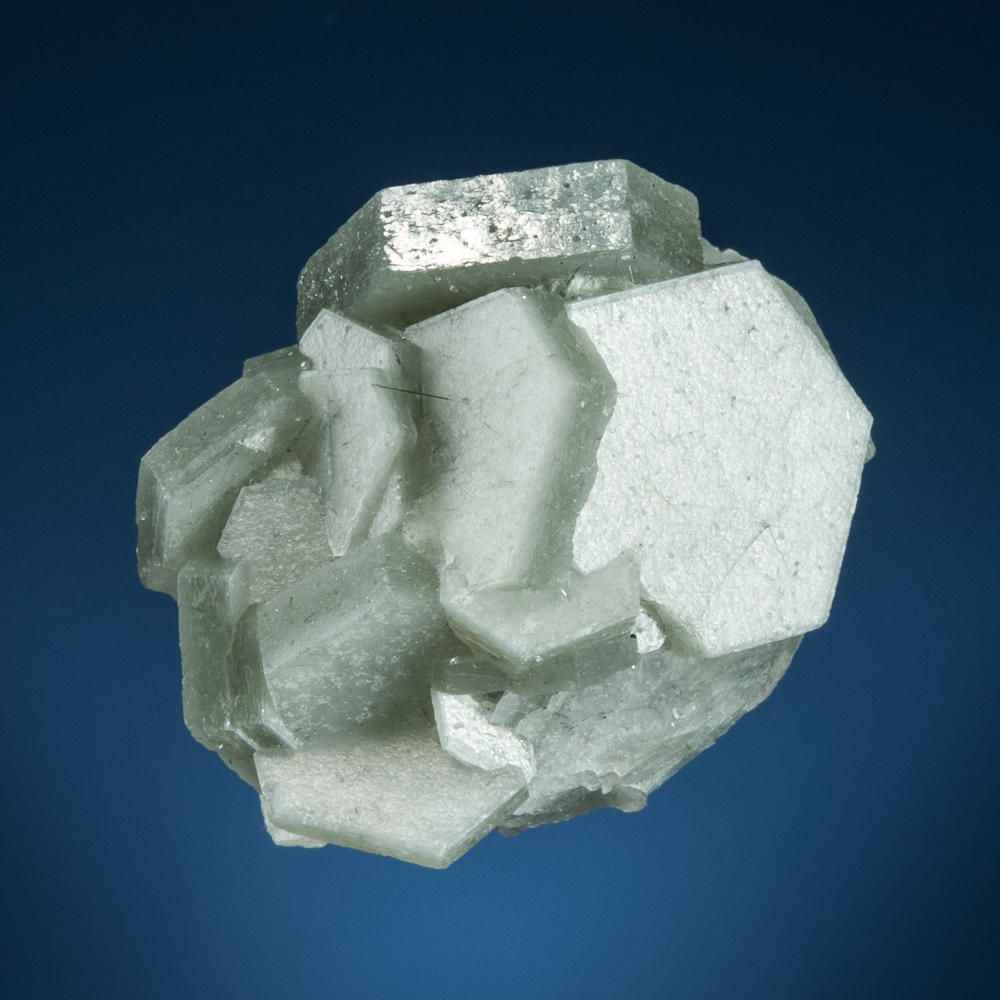 From Russia, the mines at Dal’negorsk continue to operate and there was a new pocket of sharp datolite crystals found at the Bor Pit. These crystals are a beautiful light green and they are highly lustrous. 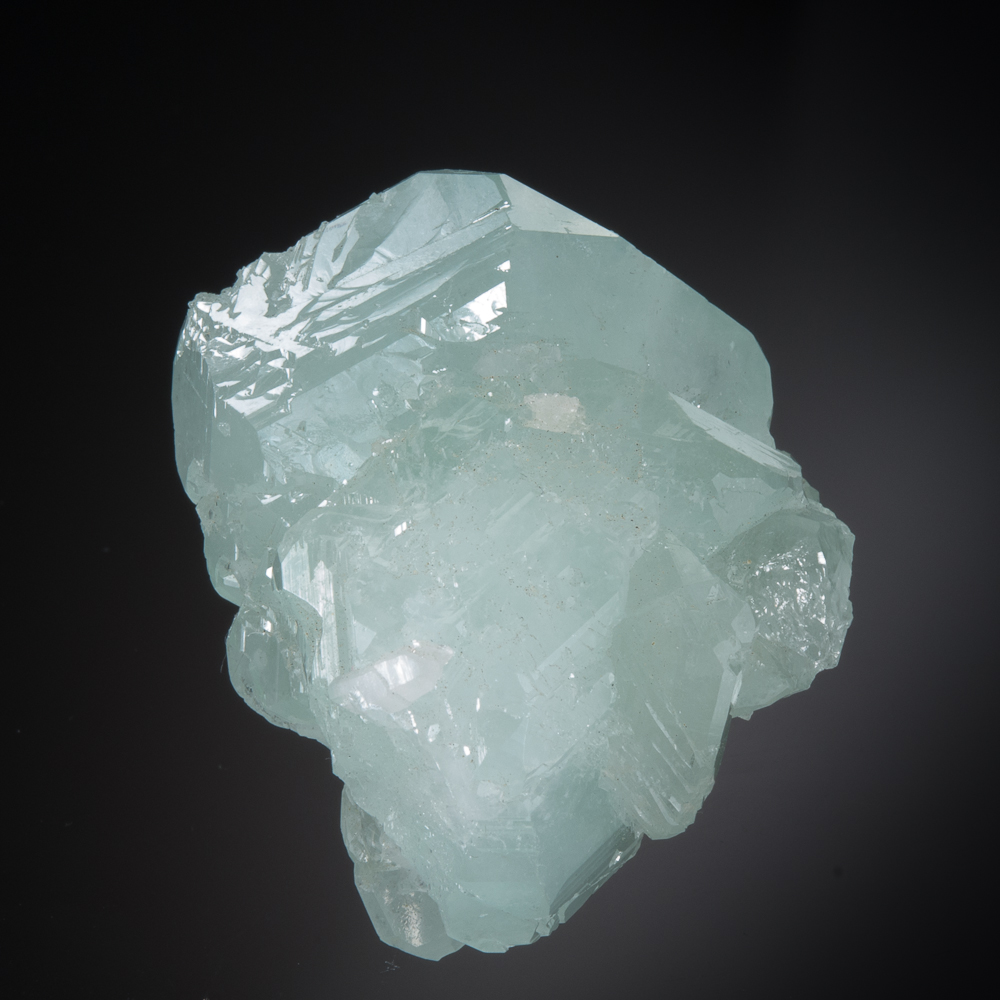 As you’ll know if you’ve read my posts from the past, I love Peru and Peruvian mineral specimens. Over the years, the large polymetallic mines have produced a variety of excellent specimens, and several workings undertaken purely for mineral specimen mining have provided spectacular pieces. However, this was really not a great year for new Peruvian specimens. Ucchucchacua has now produced no new specimen material in three years, and a new piece of unfortunate news from Peru is that the Lily Mine has ceased operations. Lily was operated for copper and is known to collectors for a few minerals – chrysocolla, and most notably some of the best atacamite and clinoatacamite specimens that have been found anywhere. I obtained only a few more of these, as good specimens are already scarce, and I’m told any future production is questionable. 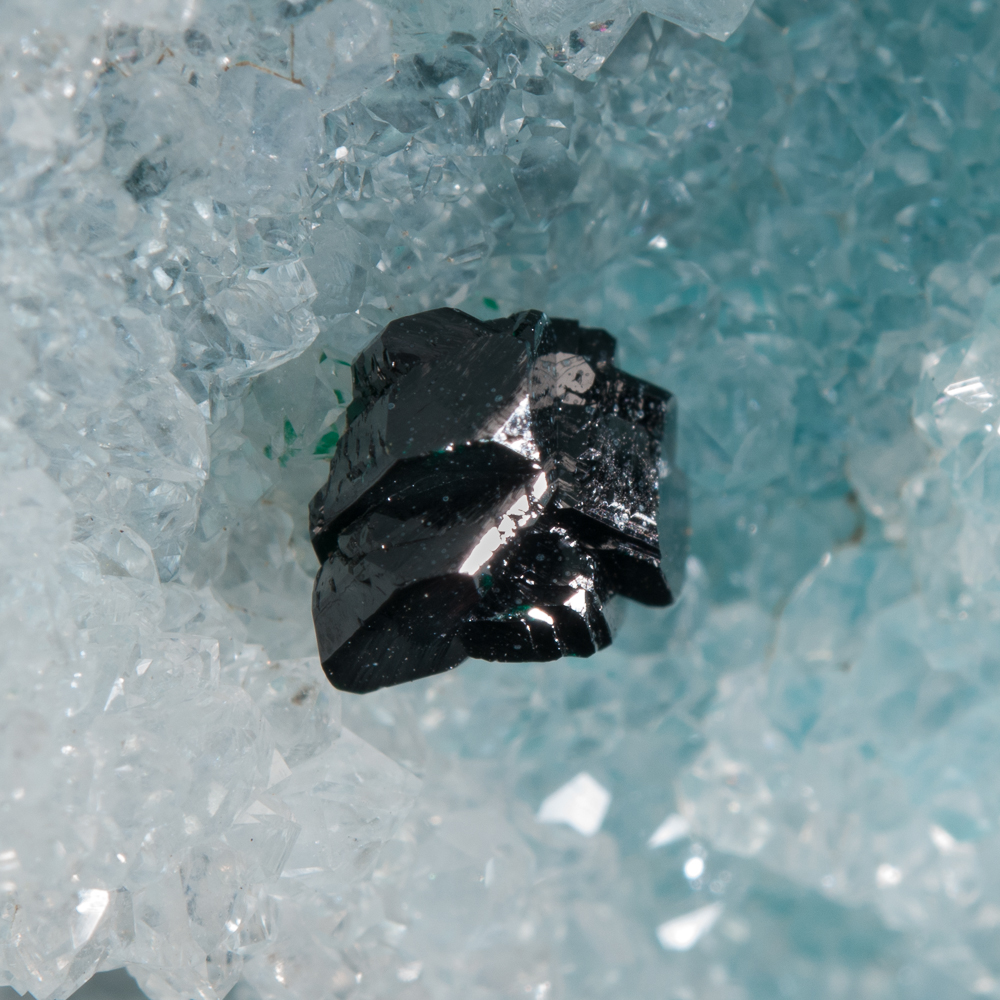 In much better news, a Peruvian collection and the workings at Mundo Nuevo have provided some excellent specimens. 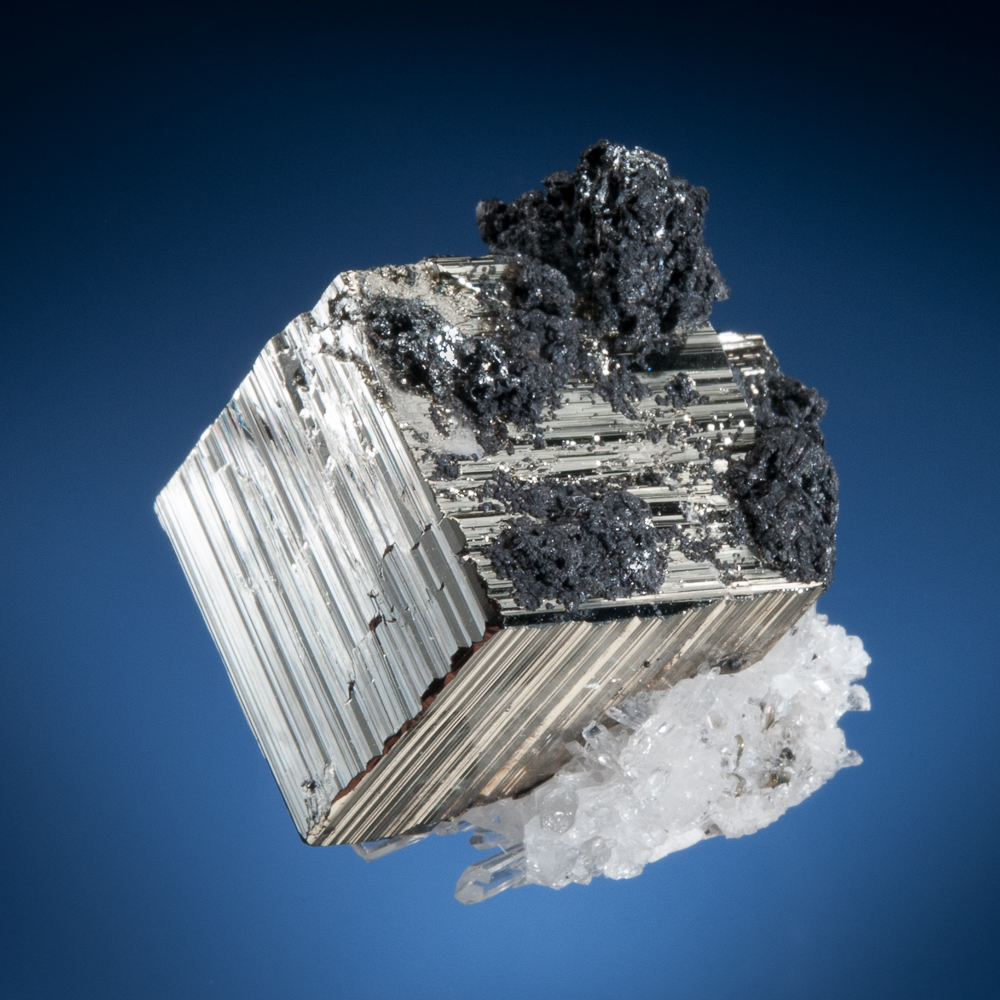 Back to North America, I was lucky to pick up a couple of nice little wulfenite specimens from the Red Cloud Mine, including this one – it’s not big, but this thing is a red window pane. 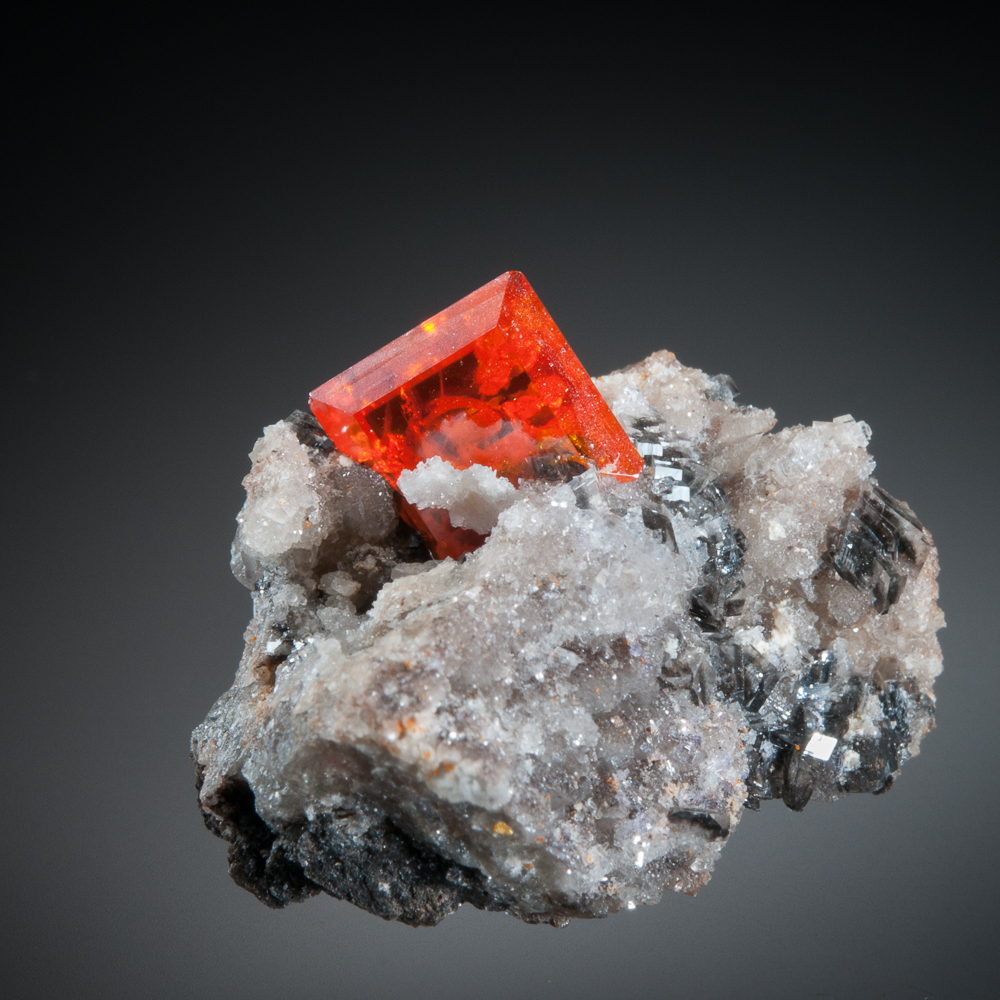 Over the coming weeks, many of these finds – and more new material – will be posted on the website, so stay tuned! 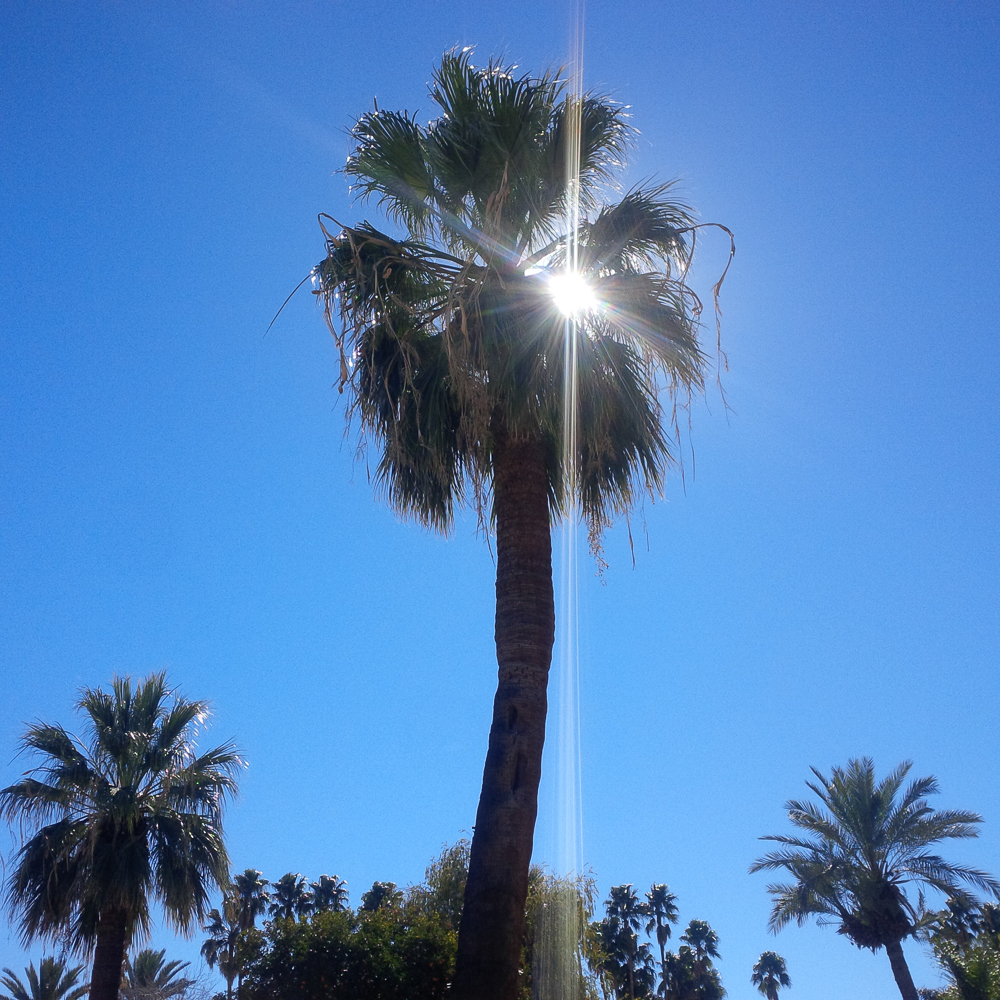 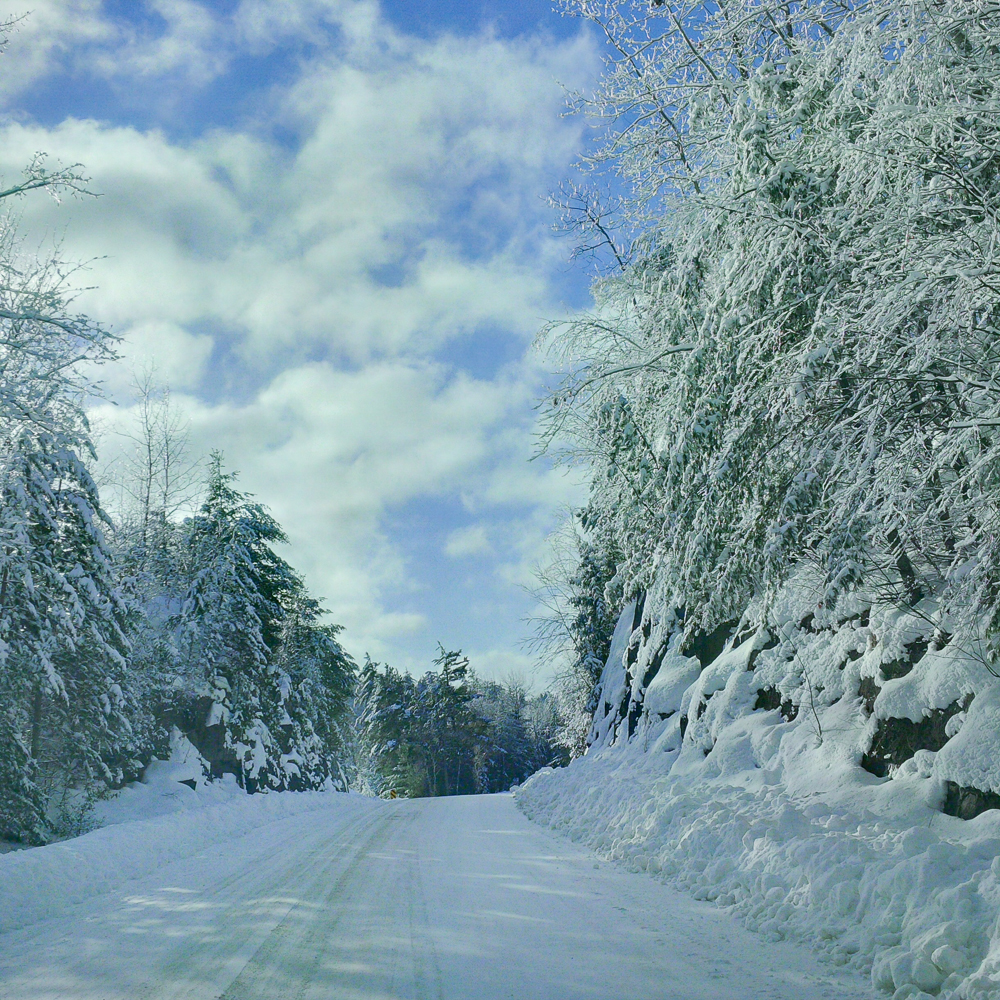 Yes, the snow piles are high. 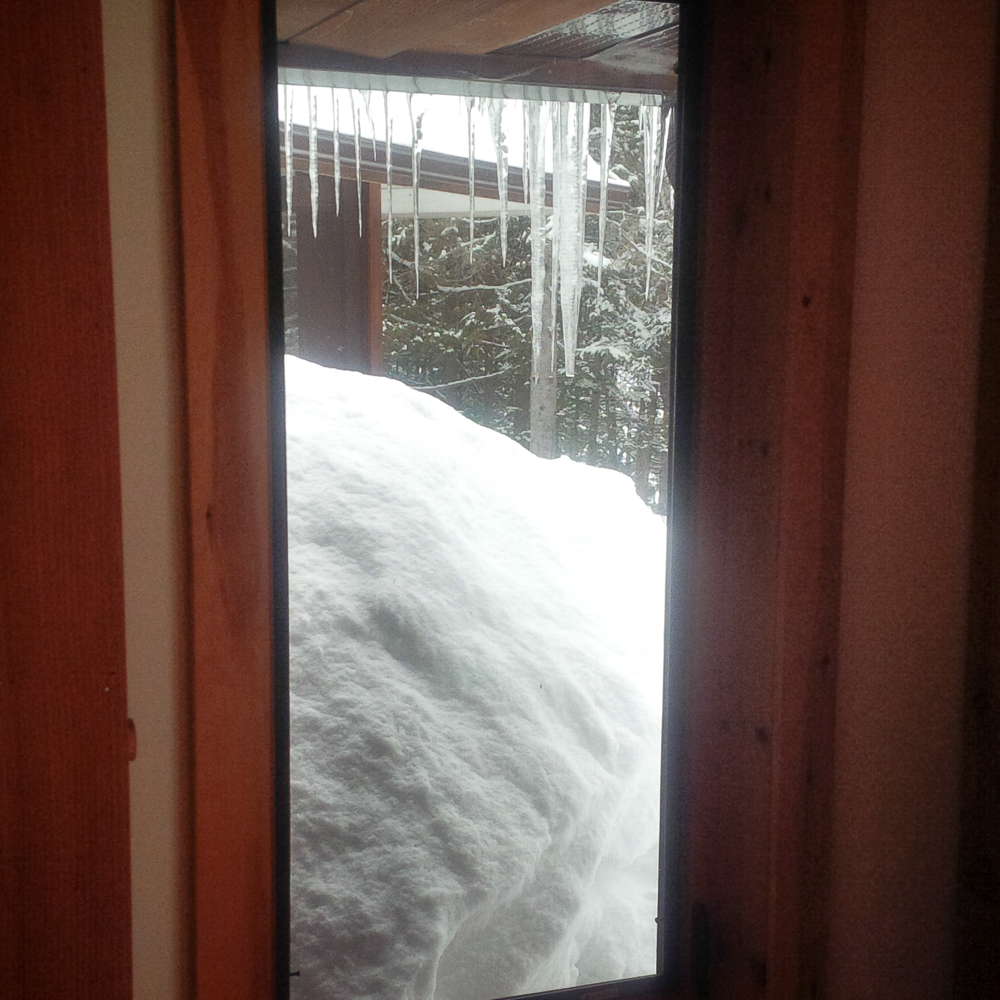 Another 9 ft tall snowpile. Granted, it reduces the view for a while.
And we probably shouldn’t expect this part of the garden to emerge until late May.

This year’s snow-management issues aside, it’s gorgeous and peaceful, with lots of active local residents in our woods… 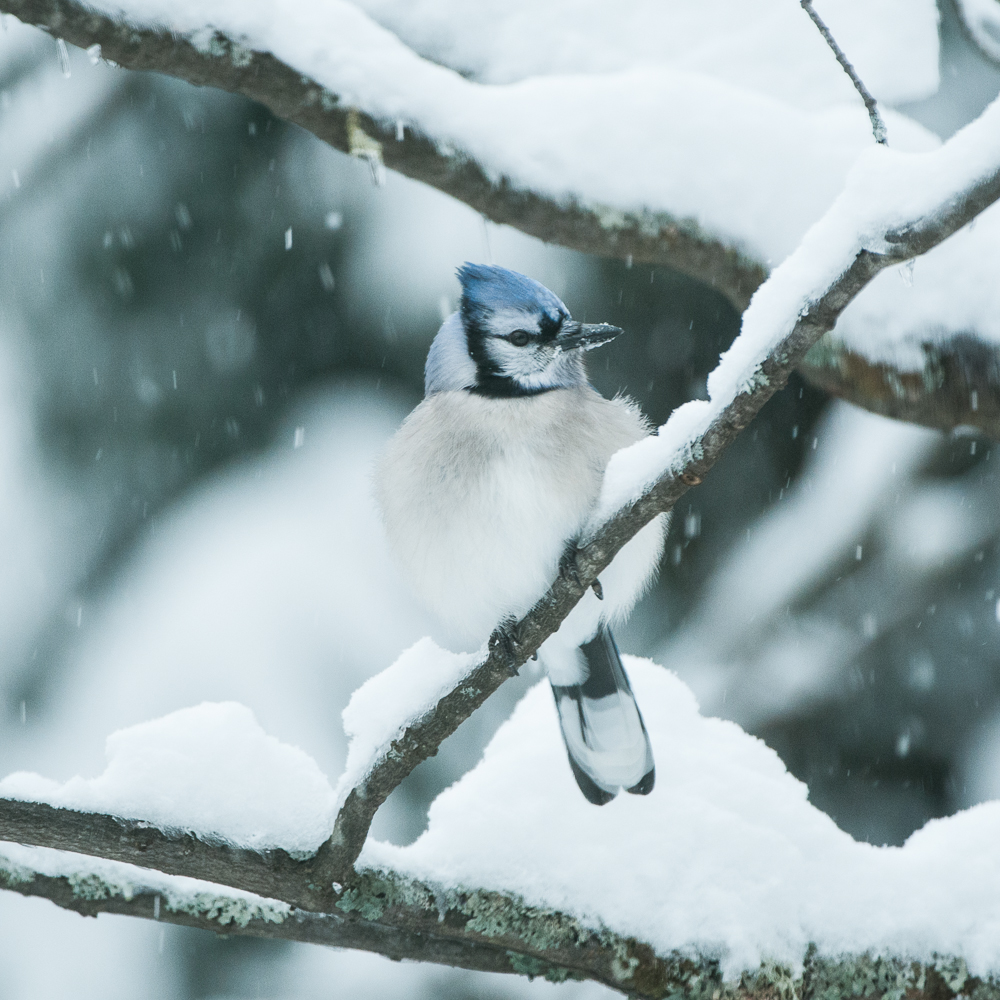 And there’s this one guy who loves winter more than any being I’ve known: 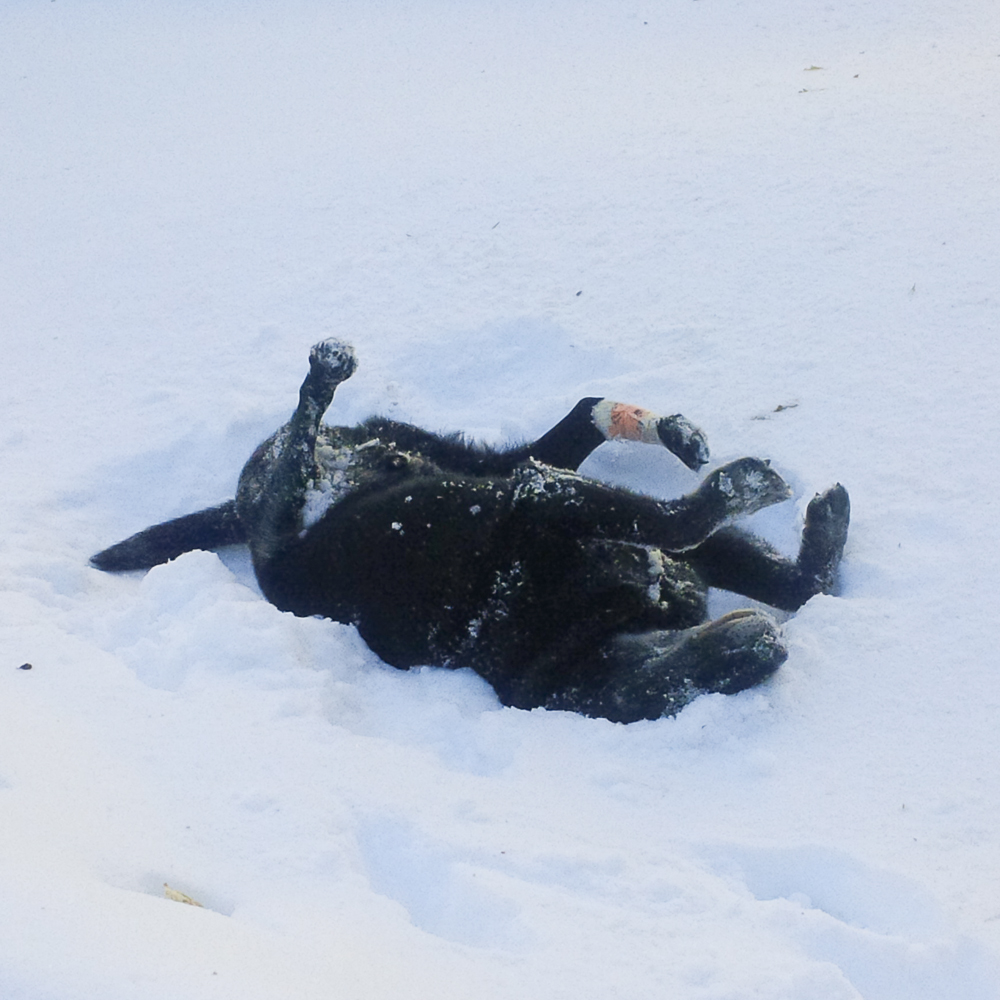 Every day from the first snows until the last snow patches are too small in spring, Emery does snow angels.

If you haven’t yet seen them, this year’s Rochester Mineralogical Symposium program and registration materials are online here. Hope to see you there!

Meanwhile, of course these specimens will be coming online soon!